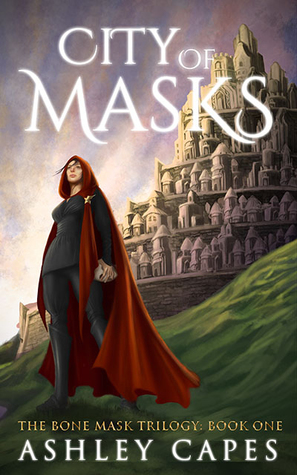 A noble daughter burdened by power she never sought.
Perched on an unforgiving coast, the city of Anaskar is under threat from enemies within. Its own royal family feuds over possession of sentient bone masks of power, leaving Sofia Falco, daughter to the city’s Lord Protector, to foil a conspiracy designed to strip her father of both his title and powerful Greatmask.
A bitter mercenary accused of murder.
Yet when disaster strikes, Sofia is forced to flee the palace and into the city where she crosses paths with mercenary Notch. But Notch has his own problems – accused of murder, he must fight to clear his name, all the while hunted by the city’s robed assassins, the very people who are now searching for Sofia.
A young Pathfinder seeking vengeance.
Meanwhile, far across the western desert, Pathfinder Ain must overcome his doubts and leave on a hopeless quest. To restore his people to their rightful home, he must unlock the ancient mystery of Anaskar’s Sea Shrine and the gargantuan sea beast that lurks beneath its harbour. Yet all who have gone before him have failed…
Follow three unlikely heroes on an epic fantasy adventure where the struggle over bone masks of power threatens to tear their city – and kingdom – into shreds.

—
Learn more about City of Masks!

What were your cultural influences for the world creation for The Bone Mask Trilogy? Why those?
The main influence was probably Italy for setting it was the coast of Amalfi in particular. The historical city was perched on the coast and actually slid from the mountain into the sea in the 14th Century so there’s a bit of that influence on the city of Anaskar itself.
I also found smaller details from the region fun to incorporate into the setting, particularly the fire-lemon which is similar to limoncello, and a lot of the naming conventions are Italian-influenced with some Latin too. For a quick example, one character is named Lupo which would make his name “Wolf” in English. I followed such naming conventions throughout the city with people and placenames ─ all save the city itself Anaskar. (It’s not strictly very Italian-sounding because it’s actually a city that has been named by the previous occupants so I didn’t want it to sound too Italian influenced.)
I think Italy has ended up the biggest influence because back in 2011 (when I first had the idea for a city under threat by a sea monster) my wife and I were in Italy and we were immediately smitten by the country ─ it was one of those once in a lifetime trips and I think I was just keen to soak in everything.
City of Masks weaves together politics, history, culture, and the action in this book. What kinds of research influenced the politics of your world?
Thanks! I drew upon monarchies and tribal systems mostly ─ always looking at where power lies in a group, I guess. Is it shared or is it guarded jealously? If it’s disrupted, who takes what is left? Those sorts of questions are fun to explore as a writer.
I remember reading a lot about various royal families who always featured a brother or son (or uncle) keen to knock off a few family members on their way up to the throne. I think it was the shadowy Richard III that I recall the most.
I think all political structures tend to have an undeniable element of personality; the forceful, confident or clever tend to have the ability to direct others, no matter their title or lack of. With the desert-dwelling Medah people, for instance, despite there being multiple elders in the Cloud clan it’s clear that Raila is holds the most sway; she tends to command the most respect in the group.
Do you have a playlist that you used while writing City of Masks?
Sort of! Nothing like a specific playlist on Spotify etc, but here’s some of the albums that I remember playing quite a lot during the writing (and editing) of the story:

Ashley is an Australian novelist, poet & teacher. You might have read his epic fantasy 'The Bone Mask Trilogy' or maybe you're familiar with his other work, the fantasy/adventure series 'The Book of Never.' Either way, you can read more about his books and get access to giveaways and free books via his newsletter below :)
Ashley occasionally dabbles in film, is addicted to 80s cartoon shows and Studio Ghibli films, and finds himself constantly awed by the simple beauty of haiku. He is also convinced that 'Magnum PI' is one of the greatest TV shows ever.

Sign up to Ashley's newsletter for free books and news:
http://www.subscribepage.com/b5w1k0

Find out about Ashley's fiction:
http://www.cityofmasks.com/