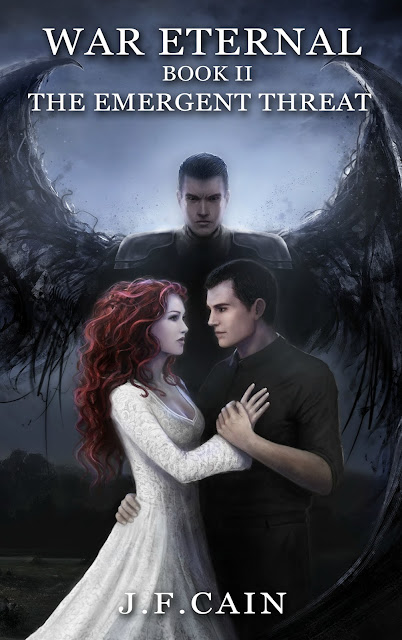 Alex risked his soul to reunite with Aranes, the angel he’s in love with, forcing her to make the ultimate sacrifice to save him. Having lost her supernatural powers, Guardians and Exorcists fight tooth and nail to protect her, but they cannot keep the dark forces that are after her away for long.

Aranes’ relationship with Alex also puts him in the crosshairs of Lucifer, who wants the angel for himself and plans to destroy his rival, even if he doesn’t believe that the man is the incarnation of the high-ranking Celestial, Abaddon.

Alex must push himself beyond his limits and use all his wits to thwart Lucifer’s plans. He may be just an ordinary man, but he won't give up his partner without a fight. He’s willing to pay any price, any price except for losing her.

Alex walked out onto the balcony and paused for a moment to enjoy the sight of his exceptional beloved calmly, and rather pensively, waiting for him. He still could not believe that she was here, in his home, with him.

“OK, I’ve arranged everything,” he said happily as he came back to her. He sat down, drank the remaining coffee in his cup and refilled it. He then looked at Aranes’ cup, which was empty. “Would you like me to pour you some?” he asked, annoyed with himself for not noticing it. “From what I remember, you like it.”

“You got the wrong message through no fault of yours. That morning in the cabin I drank coffee to look normal. There’s no longer any reason for me to do it; I am normal now.”

Alex quirked an eyebrow and looked at her, about to burst into laughter.

“Anyway, as normal as an incarnated Angel can be,” Aranes added.

Alex reached out with his left hand, grabbed her chair’s armrest and pulled it towards him. He then wrapped his arms around her waist and came as close to her as the armrests between them would allow.

“My love, I assure you that your anatomy is somewhat above and beyond normal. I made a thorough check last night.”

His innuendo surprised Aranes and it showed on her face.

Alex saw that change in her expression and was abruptly serious.

“What’s wrong, my angel? Did I say something that offended you?” he asked worriedly.

“No, I’m just not used to people speaking to me this way… all this is more or less new to me.”
Alex’s heart pounded.

“Is there something you regret?”

“My position doesn’t allow me to make frivolous decisions,” Aranes replied reassuringly, sensing his worry. “In every situation I do what I think is right or necessary.”

“Is it right for an Angel to love a mortal?” he asked, his expression calm, but the anxiety in his voice betrayed his inner turmoil.

“I love all beings,” Aranes answered, her kind, warm eyes lighting up with beautiful emotions. “I just love you differently, and for that to happen there must be a serious reason.”

Alex’s anxiety had reached its peak.

“And what is the reason?”

“I can’t say anything with certainty right now,” was Aranes’ response. She could, but she didn’t want to frighten him. It would be better for him if the revelations came in stages, if he was lucky. “What I am sure about is that our love will bring many changes, both in the physical and in the ethereal planes.”

The first part of her answer disappointed Alex. But from the little he grasped in the second part, he held on to the words “our love”, which he liked a lot.

“So you don’t regret anything,” he said, searching her eyes for confirmation.

Aranes saw the vein pulsing rapidly at the base of his neck and wanted to save him from the anxiety tormenting him once and for all.

“I love you,” she stated, looking him in the eye with an expression that left no room for doubt.

Alex felt all the wonderful feelings that such a statement brings out in a man who is madly in love. He slipped his hand behind her neck, brought her face close to his and gave her a long, deep kiss, filling her mouth with passionate love. Like a lit match falling on flammable material that instantly catches fire, his hunger blazed. He wanted her like mad, but he held himself in check. He was scared he would frighten her with his unflagging desire to make love to her. She wasn’t an ordinary woman. She was something different, something superior. He had to treat her accordingly, and limiting his heated demonstrations of his feelings would be a good start. 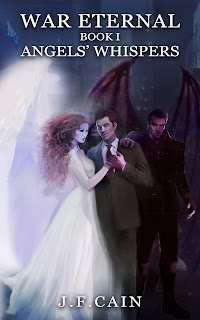 Alex Meyers, a dynamic, global entrepreneur, has an advantage that no other human has ever had: he is protected by Aranes, the Superior of the Angels. While he is skiing, he dies in an avalanche, but his all-powerful protector breaks one of the ethereal world’s most important Rules and brings him back to life. Alex falls head over heels in love with the beautiful Angel, who appears to him in human form. But she disappears just as suddenly as she had appeared.

While he searches for Aranes, Alex discovers her true identity and that he actually might be the high-ranking Celestial Abaddon, who is mentioned in the Revelations prophecy as the one who will defeat Lucifer.

The man who fate has thrust among the world’s superpowers is now living a nightmare. He wants to evade Lucifer’s pursuit, find out who he truly is and once again see the only being he has ever loved. And the only way to do it is to make the ultimate sacrifice.

Angels' Whispers is the beginning of an epic tale set in modern times. The eternal war between Light and Darkness is at a critical turning point: Angels and Demons, invisible to mortal beings, battle for dominance in the physical world, while Guardians, vampires and werewolves, who live among the humans, find themselves on opposing sides in a deadly power game.

J. F. Cain is a writer with a restless mind who spent years of her life reading and traveling. But of all the places she has been to, her favorite is a house in the mountains where she can focus on her writing.

She is a seeker of knowledge who transcribes the results of her studies in her books. Her favorite pastime –other than reading and writing– is scouring libraries.

However, she has lately convinced herself that she enjoys shopping just as much, as well as spending time with family and friends – the few that can still tolerate her frequent and extended periods of absence.