L@@K at ME! Everglades by Petie McCarty #GIVEAWAY #ContemporaryRomance 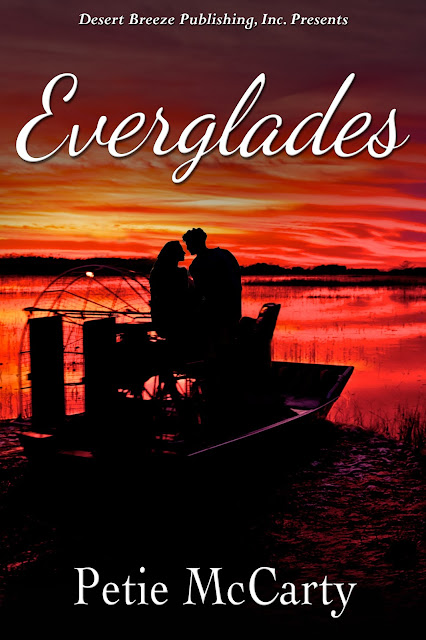 Photojournalist Kayli Heddon is sent on an airboat safari for a photo essay and gets stranded deep in the Everglades with her ruggedly handsome guide. She is forced to learn some tough lessons -- namely, trust means everything in the dangerous River of Grass and a skilled partner can make all the difference in her survival.

Skye Landers takes the airboat safari gig as a favor to his cousin. He doesn't expect the governor's photographer to catch his eye, but Kayli Heddon is unlike any woman he has ever met. Skye knows he should keep his distance, but common sense goes out the window whenever he gets near her.

Unfortunately, Kayli thinks honesty is the most important thing in a relationship -- any relationship -- and Skye Landers is a fraud. When secrets surface from Skye’s past, Kayli and Skye are soon on the run from more than just alligators.

Leaping over palmettos and tree roots and dodging half-buried cypress knees, they raced for their airboat as the whine in the distance grew louder. Kayli recognized the whine as a second airboat. She couldn't stop running if she wanted to, Skye had a death grip on her hand.

"Tell me what's wrong," she shouted, "and why are we running?"

Twenty more yards and they reached the airboat. The approaching craft sounded closer by the second.

He dropped her hand to grab the bow line. "Get in the boat," he ordered.

He whipped around with a fearsome glare.

"Not until you tell me why we're running." This was so unlike the man she'd come to know over the last two days at close quarters. He looked -- well, scared.

"Crane Tennapin is on his way here with drug runners to make a pick up."

She felt the blood drain from her face. "Who is Crane Tennapin?"

"Another cousin, now let's go." He pushed on the bow of the airboat. "I've got to get you out of here. I'll leave you at Sally's."

"You can't. I have to come back to help Crane."

The whine grew louder and closer.

She froze. "You're coming back to help a drug dealer?"

"Hell no!" he roared and softened his voice when she flinched. "Crane's in over his head. He got mixed up with the Colombians before he knew about the drugs. Now they're threatening to hurt him if he doesn't help with this drop."

He motioned her over and held out a hand. "Come on, come on."

"What if you don't get back in time?" She couldn't believe she wasn't scrambling into the airboat.

He had her by the shoulders in two steps and stared hard in her eyes. "I can't let anything happen to you." The emotion in his voice wrapped around her heart like long tentacles, and she couldn't pull free. She didn't want to.

Her arms flew around his neck, and he crushed her to his chest, his mouth hard against hers. A flood of emotion rifled through her unlike anything she'd ever felt in her life. She wanted to fold her soul into his and never let him go. She had wanted this kiss from the moment she laid eyes on Skye. She wanted it to last forever.

Precious seconds were squandered. The airboat whine grew louder, and his head jerked up. "Damn."

"There's no time to get me out." No way would she leave him, not with drug runners coming. She may never see him again.

He pulled back and gazed into her eyes. "You have to trust me."

She nodded. "What're you going to do?"