In celebration of the release of
Ju Ephraime's new book... 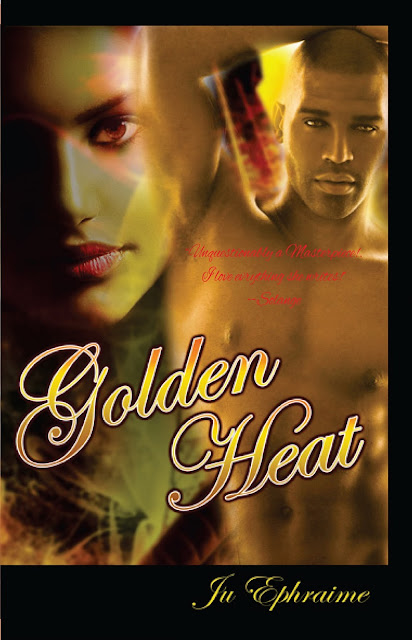 Set in the beautiful state of New Mexico two very strong minded individuals found themselves thrown together while working on a project. And, as it inevitably happens, Andy and Bernie were not able to be in each other’s company for more than five minutes before the heated sparks begin to fly. Not wanted to mix business with pleasure, Bernie fought it with everything she got. While Andy tries to be the stronger one, but there was no fighting the golden heat that came alive whenever she and Andy were in the same room. It was so bad, on more than one occasion Bernie contemplates severing the professional relationship and going hog-wild on Andy, but she persevered, that was, until the final day of the project, then all hell break loose.

Andy rushes into the lounge area of the Crown & Bull where he’s meeting Bernie. Taking a seat where he can observe the entrance, he orders a Scotch on the rocks and sits back to wait a bit. Just then, a strikingly gorgeous woman walks through the revolving doors. This is the kind of woman who drives a man to drink, he thinks sardonically.

It takes him a moment to realize she’s coming toward him. Man, she’s gorgeous; beautiful is too mediocre a word to describe her. She has a body that makes a man twitch just watching her, and he has the itch. He’s so busy trying to conceal the evidence of her effect on his body that he is taken by surprised when she addresses him.

The voice is a husky contralto that makes the blood vacate Andy’s brain and rush to his masculine parts. He has to take a deep breath to slow down his heart rate. His powerful physical response to the woman irritates him. God damn it, he was expecting a man. Jonas never told him the investigator was a woman. He’d foolishly assumed, with a name like Bernie, it had to be a man. -----, he needs a moment to get himself together. So, instead of responding immediately, he sips his drink that the waiter had put in front of him a few moments earlier. Without saying a word, he lets the mellow taste of the liquor course its way through him like a kiss from the lips of a sensuous woman—like the one standing in front of him now, with her hand extended. Only after the taste on his tongue has dissipated to a shimmering echo of heat does he look up. Why, he asks himself, would a woman who looks like this, be named Bernie? 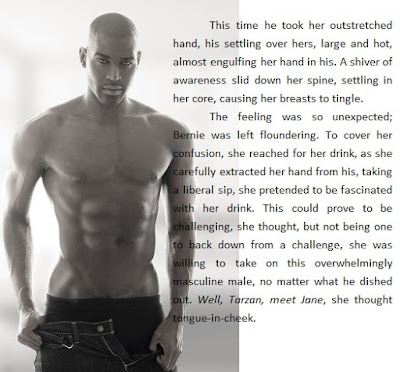 ...Ju Ephraime has re-released her book... 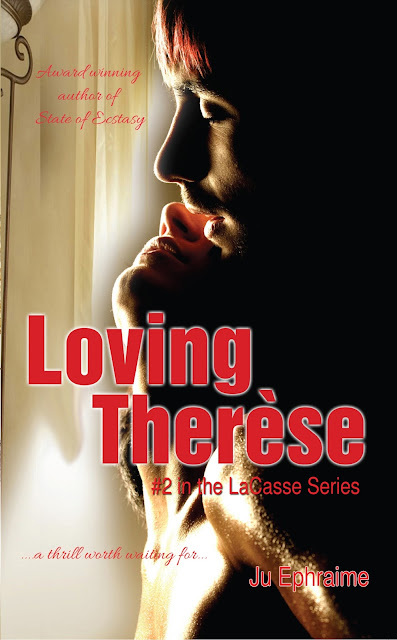 Foxx LaCasse is a player, on and off the field, until he met Therèse. He’s athletic, handsome and hot-blooded, with vengeance on his mind.

Therèse is an intensely passionate English woman, who refuses to follow convention and chose instead to select her man from the natives of the French Caribbean island of Martinique, Foxx LaCasse. When she began to receive threatening notes, asking her to stay away from Foxx, she fled back to her home in England, without giving Foxx any explanation. Now two years later, she is back on the island, trying to pick up from where they’d left off, but Foxx was having none of it. He had one goal in mind; to have his way with her, and discard her, as she had him, two years ago. But when he finally reunites with his beautiful, passionate, elusive target, he finds himself offering his protection and his heart.

Filled with Ju Ephraime’s trademark sensuality, characters you love to hate and men you wish to love, Loving Therèse will have you enthralled with its unexpected plots and refreshing style, as these two destined lovers, recaptured and embraced their love. 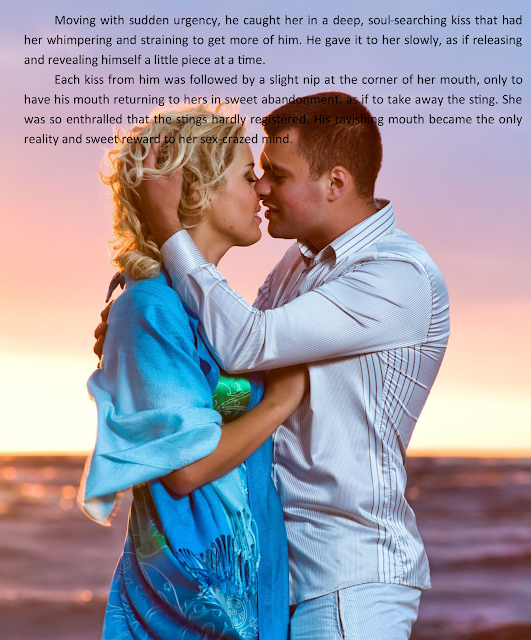 With a barely suppressed growl, Foxx brought her head around to his as he lowered his mouth to hers. He ran his tongue over her lips before moving to the corner of her mouth. He was reacquainting himself with familiar terrain, his touch almost reverent in its gentle intimacy.

Then he moved to the soft lobe of her ear without fully taking possession of her mouth. Having him so close, yet denied the full taste of his mouth, had her blindly seeking it, wanting the full pleasure of his kiss.

Moving with a sudden urgency, he caught her in a deep, soul-searching kiss that had her whimpering and straining to get more of him. He gave it to her slowly, as if releasing and revealing himself a little piece at a time.

Each kiss from him was followed by a slight nip at the corner of her mouth, only to have his mouth returning to hers in sweet abandonment, as if to take away the sting. She was so enthralled that the stings hardly registered. His ravishing mouth became the only reality and sweet reward to her sex-crazed mind.

Again and again, he went back and forth between her ear and her mouth before dipping down to the pulse beating wildly in her neck. Her nipples were stiff from the friction of rubbing against his chest, and her panties were damp with her juices. She wanted him so much that her body temperature rose and she broke out in sweat, causing a rivulet to run down between her breasts. This was too much for Therèse. The rhythm of her breathing became frantic as she felt herself almost on the verge of an orgasm.

She wanted to wrap herself around him, to feel him deep inside her as he took her again and again, as only he could. Desperate to reach fulfillment, she tried pressing down on his rigid cock, but this proved too much for him, as, with a harsh curse, he suddenly broke the kiss and lifted her back to her seat.

Therèse felt so bereft she wrapped her arms across her breasts where her nipples were still tightened into hard, painful knots. She rocked back and forth, making a keening sound, which had Foxx looking at her strangely. She didn’t know what to make of that look, but she could tell both of them were equally shaken by this interlude.

“I can take only so much,” he muttered, as he lowered the window of the vehicle to give them some much-needed cool air, lessening the sexual haze fogging up the vehicle.

The knowledge that he was not in full control and was willing to reveal this to her filled Therèse with a mindless excitement that remained with her as he eased the vehicle back into traffic.

It took a while for the sexual tension in the vehicle to simmer down. Then, with one smoldering look from Foxx, she was back to burning up. His heavy-lidded eyes were a deep green, the brown all but gone. That look had her squirming in her seat in anticipation of their next encounter.

In less than twenty minutes, they were pulling into the first stop on Foxx’s trip, a local farm he was visiting. He got out of the vehicle and came over to her side, holding out his hand to her. She placed her hand in his and immediately felt the heat of his firm grasp as he helped her from the car.

Lowering his head, he made as if to reach down to her lips, but with a muttered curse, he swung around and went striding toward the farm. The owner came out to greet him, and began speaking in French.

Foxx answered him in English. The other man responded in English, and they continued the conversation in that language.

Therèse was grateful for Foxx's consideration. Although she could follow the conversation in French with no problem, she felt better when she did not have to translate everything in her head. What she did get immediately was that Foxx asked for cognac. She wasn't surprised; cognac was the drink of choice on the island and most homes had it in stock.

“Do you want something to drink, Therèse?” he asked after he’d introduced her to the owner.

“If I may, a long, cool drink with lots of ice will do me good,” she replied as she watched Foxx down the drink he was handed and hold out his glass for a second serving. This one he sipped slowly.

In no time, Foxx had concluded his business, and they were on their way to his next stop. They visited two other farms, but Foxx didn’t spend any time there, he was in and out. He appeared to be in a rush, and she sat back and watched as he pushed the vehicle to its limit. 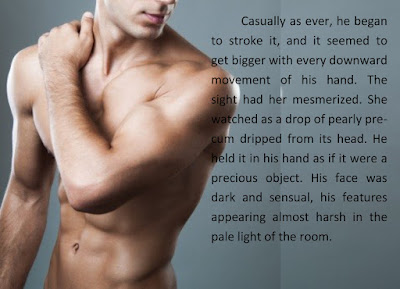 Ju Ephraime began writing professionally at age 19; at that time, she wrote short stories for the local radio station in her home town. She gave up writing to pursue her education and has since earned several degrees, including two Masters and a Doctorate in Higher Education Administration from Northeastern University in Boston. During the course of her schooling, she wrote and published a working curriculum for a career school, a business manual and its answer key, as well as other literary work. In 2010 she revisited her first love, writing for fun and enjoyment. She writes high heat, steamy, romance novels. The first was, State of Ecstasy in the LaCasse series, which was soon followed by, Temptation to Sin, Loving Therèse, #2 in the LaCasse series. Ju has gone on to write several more books, including, The Odor of Violet, on tour this month, Complete Surrender, #3 in the LaCasse series; as well as, a Christmas Novella, Footsteps in the Sand and her award winning paranormal, White Magic Woman, Quarterfinalist in Amazon Breakthrough Novel Contest, 2013, out of over 10,000 entrants.

Ju lives in Connecticut, where she is very active in her community. She is the administrator of a business school and the president of a non-profit organization that dresses individuals for job interviews.