Charlotte Duncan has relocated to the small town of Puckhaber Falls, with only one goal in mind - to end her life after a devastating tragedy in her past.
The friendly nature of the local residents, along with an accidental meeting with a mysterious stranger, gives Charlotte reason to pause and reconsider the path she has chosen.
She finds herself drawn to Lucas Tine - the man is an enigma and Charlotte has difficulty understanding why she is so enamored of him. What is it about this man, which she finds so difficult to ignore?
As time passes, Charlotte discovers Lucas's mysterious background - and in turn, reveals some hidden secrets of her own.
The Nememiah Chronicles - Knowledge Revealed is the first book of The Nememiah Chronicles Series by D.S. Williams.

The sound of rushing water increased in volume and between two ancient firs a fine mist rose over the water, creating a mini rainbow in the dappled sunlight.  I slowed down, cautiously picking a safe route towards the river’s edge.  The water was crystal clear – every rock, every pebble was visible on the sandy riverbed, and the flow of water was smooth and languorous.  Thick foliage drooped along the steep banks, trailing into the water.  It was a joyous montage of reds and yellows as the trees turned in the cool autumn weather, preparing for winter ahead.  There was a steep plunge in the direction of the falls and the water flowed and eddied as the river sped towards the drop.  It must have been forty feet from the top of the falls to the river below, the water rushing down the sheer drop and crashing onto the heavy boulders at the base.  I stepped steadily closer, my breathing calm as I watched the water roaring across the edge.
This was where I would end my life.
It would be easy this way, quick and leaving no room for uncertainty.  One single step and I’d be beyond failing, as I’d done so many times before.  It was isolated; nobody would find my remains and that would solve one issue which had stopped me in the past – the idea of someone finding me.  I wanted nobody in that situation, forced to deal with the trauma of finding a dead body.
And it would be fast, probably only a few seconds, to hit the boulders below.  If the fall didn’t kill me, death would come swiftly in the icy water.  I picked up a small branch and threw it into the water experimentally, watching it spin and twirl towards the edge of the waterfall before plummeting to the rocks below, vanishing under swirling foam and mist.
Satisfied with my plan, I smiled grimly.  I felt calm and confident, totally at peace with my decision.
Almost intuitively, I took a small step forward, out onto the slimy, moss-covered boulders at the lip of the waterfall.  And another.  My teeth began to chatter.  Only two more steps and my life would be over, two more steps would lead to a serenity that had been missing from my life, for so long.
I took one tiny step, mesmerized by the water thundering down the cliff.  I was vaguely aware of being wet, the spray wafting up from the falls and landing in fine droplets on my face, running down my neck.
Just one more step.
I lifted my foot, but something hooked firmly around my waist in the same second, snatching me backwards from the falls.  I lost my footing on the slippery rocks and tumbled backwards, plunging headfirst into the freezing river.  The shockingly cold water took my breath away and I swallowed a large mouthful, my throat, and lungs burning.  It felt like a thousand needles plunged into my skin as I struggled underwater.  Before I had a chance to panic, I was wrenched upwards and found myself facing an infuriated Lucas Tine.
“Are you trying to kill yourself?” he demanded, his eyebrows furrowed together while he glared at me with undisguised fury.  His shoulders were stiff with tension, his hands gripped firmly around my upper arms.
Though distracted by the abrupt dunking, I saw the flare of silver in his dark blue eyes, pulsating with energy as he continued to stare down at me.  He was waiting for a response and I cowered beneath his angry gaze, feeling like a complete and utter fool.  I was soaked through – my jeans, sweater, and the heavy coat I’d been wearing were all wringing wet and my teeth chattered incessantly.  Even if I wasn’t freezing, I couldn’t answer – what was I going to say?  How could I tell this complete stranger that his guess was correct, and he’d just stopped me from achieving my desire?  I did the only possible thing in the ridiculous circumstances.  I burst into tears. 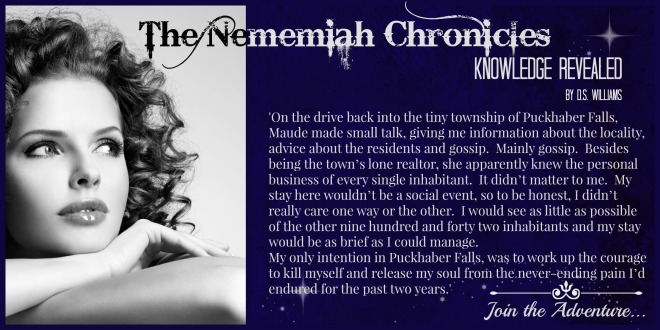 Wife and mother to four demanding teenagers, D.S. Williams started writing at the age of five, when life was simpler and her stories really didn't have to make much sense. When you're five, happily ever after always ended the story and how you got there didn't matter so much.
Older and wiser, D.S. Williams has continued to write... and write... and write. With the support and encouragement of her husband and friends, she has finally come to the conclusion that she can't keep hiding from the world forever and should try sharing the numerous novels which have been written over the past 40+ years.
D.S. Williams enjoys writing (obviously), reading (voraciously) and making lists (obsessively). She's enjoyed a lifelong addiction to foods starting with 'ch' - cheescake, chocolate and chips - and when it comes to books, she loves a really good cliffhanger. Be warned!
She shares her life with her husband of twenty eight years, the Gang of Four and the current furry residents, Tuppence the Groodle and Angus the Bull Mastiff.

Other books from The Nememiah Chronicles series