Title of book: Intercepted by Love #1
Rachelle Ayala is not only the author, she is the editor and cover designer too.
Page #: 120 pages
Official release date: March 21
Official genre of book: Contemporary Romance (Sports)
Content warning: Steamy scenes and some language

Pro quarterback Cade Prescott’s last play was to lose the Super Bowl for his team. To escape the bad press and recover from the disastrous season, he changes his appearance and hides away at a sleepy university town.
Andie Wales’s first love is researching ancient bad boy kings. She is blissfully unaware of the Super Bowl and modern day bad boys. When her dog meets and mates with Cade’s dog, Andie’s first concern is to get her dog to a vet. She gets waylaid by Cade and his hunky good looks and has no idea just how out of her league Cade is.
Despite his secrets, Cade feels differently about Andie and thinks he might be falling in love. Unfortunately, his past catches up with him, and he is forced to make a difficult decision. Can a professional athlete and a research librarian truly prove the axiom that opposites not just attract, but were meant for each other?

A man wearing a knit watch cap stared at her. His eyes moved from her face down to her toes, then traced a sensual path up between her legs, around her belly, lingering at her breasts before moving to her lips.
“What are you doing here?” she hissed in what she hoped was an authoritative tone. “This is the private antiquities collection.”
She’d have him know she was a librarian and a researcher. He, on the other hand, looked like a brute.
Wide shoulders, thick neck, strong jaw with several day’s growth of beard, dark brown. Honey colored eyes. He was either a lumberjack or a stalker, and she was alone deep in the stacks of the library, underground in the bowels of the university. No one would hear her scream. No one would find her body.
He chewed gum and blew a tiny bubble, his pink tongue pointing at her after the gum popped. A smirk lifted one side of his mouth as if he expected her to chastise him for chewing gum.
She obliged. “No bubblegum in the library. I’m going to have to ask you to leave unless you show me your pass.”
Andie certainly hadn’t given him a pass. She’d have remembered him. A man like this giant standing in front of her would cause quite a stir at the circulation desk.
“Sorry, ma’am.” He spread his empty hands. “I heard a noise and thought to investigate. Can’t have any mice chewing up precious documents.”
“A noise?” Holy macaroni. Could he have heard her squeak of delight when she fingered the artist’s rendition of David in the nude?
Quickly, she shut the thick tome and crossed her arms. “Since you don’t have a pass, you must leave.”
“I suppose you could give me one.” His eyes swept her chest, causing her nipples to stir.
Oh, right, her name badge.
“Andie Wales, would that be a Miss or Missus?” The man’s drawl drew shivers up and down her spine.
“Miss, but to you, I’m Head Librarian, and I’m sorry. You must fill out a form in triplicate and have your driver’s license examined before I can issue you a pass.”
“Can’t you make an exception for me?” The giant’s eyebrows perked. “I’m sure you know who I am.”
Andie picked up the heavy book and placed it back on the shelf. Arrogant guys pissed her off, although truth to tell, if this guy had been in this small college town more than twenty-four hours, the entire village would have been buzzing about him.
Handsome, rugged hunks didn’t frequent the backwoods of upstate New York, no matter how picturesque the town and how brilliant the fall colors and slippery the waterfalls were. 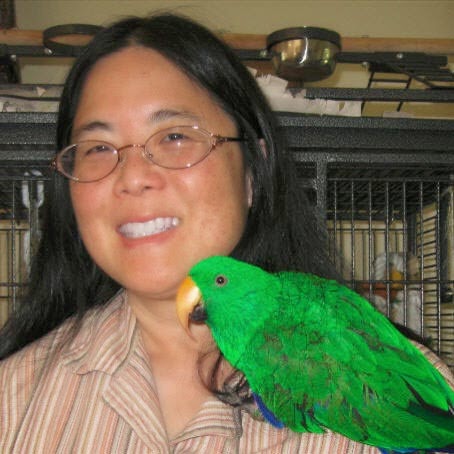 Rachelle Ayala is a bestselling Asian American author of dramatic romantic suspense and humorous, sexy contemporary romances. Her heroines are feisty and her heroes hot. She writes emotionally challenging stories but believes in the power of love and hope.
Subscribe to her mailing list for upcoming books and giveaways: http://bit.ly/RachAyala and find her books at online retailers Amazon, Barnes and Noble, Kobo, Apple iBookstore, and Smashwords.