Hi! Yes, you read that right. I have a new release! Sneaky of me, wasn't it? I'm not making a big deal out of it as it's only a novella; a quick afternoon read. However, its my hope that you'll enjoy it. To whet your appetites, I'm sharing the first chapter below. 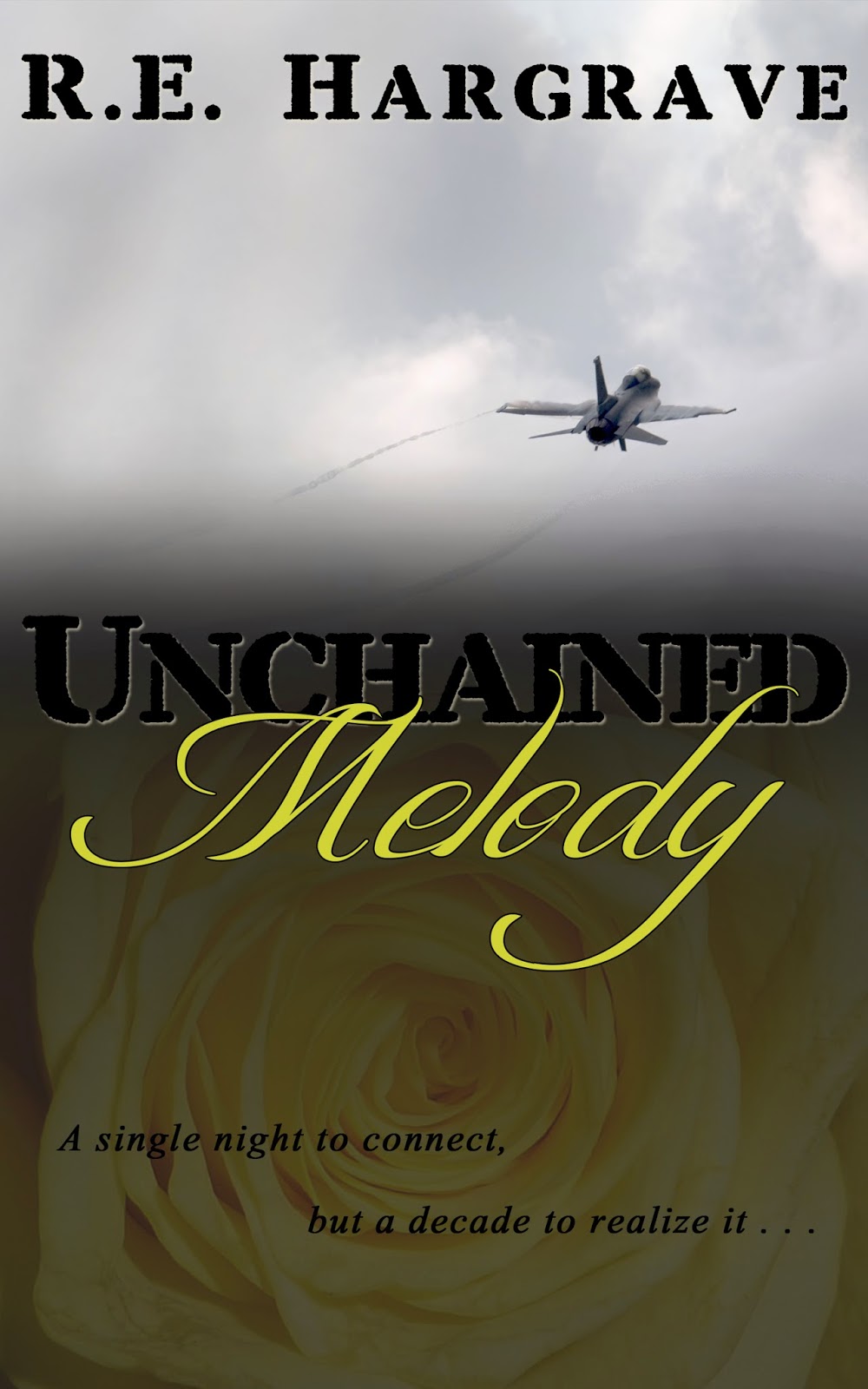 Summary:
Marshall Chandler is a true American who grew up wanting nothing more than to serve his country to the best of his ability, by becoming a fighter pilot in the United States Air Force. On the eve of his first assignment, he meets the woman that will haunt his dreams and change his life.


Add it on GOODREADS

Classic rock music played in the background. It was loud enough to tamp down the murmurs from patrons sat upon the surrounding stools at the bar and tables in the room. The familiar tunes were at a low volume, keeping the atmosphere quiet enough to hear the thoughts in my head.

The cheap, watered down booze, however, was doing its best to keep the thoughts quiet, too.

Tonight would be my last in San Antonio, Texas, USA. For a while, at least. Tomorrow I was being shipped out from Lackland Air Force Base to Afghanistan, where I would report for my first official assignment since graduating from the flight Academy. After four years of training, I’d earned my wings at long last, and was now going to get my shot at making my dream come true. I was determined to master the wild blue yonder.

In celebration, I’d come down to the Officer’s Club hoping to pick up some pretty little thang and coax her back to . . . well, some place. My room had been cleared and the key turned in; but definitely some place where I could get her out of her clothes and onto my joystick.

At dawn I was leaving for war. Who knew how long it might be before I’d enjoy the company of a woman again, if ever. What if I were injured, or shot down and killed? Anything could happen in an instant. Was it so wrong of me to want one last night to capture some memories to relive in the dark days that were coming? My momma didn’t raise no fool: this country boy knew war wasn’t pretty. Since my daddy had raised me to be proud of being an American, I was putting myself into the hands of the government of my own free will.

Fiery hot, the liquid burned my throat each time I let more pour down my throat, all while watching . . . waiting.

The moment she walked into the establishment with a group of women—they always travelled in packs—I knew I’d found my target. That they were still clad in their uniforms told me they’d come to the bar straight from work.

Letting my eyes zero in on her curves pulled a low whistle from me while I took in the fitted tailoring of her crisp shirt and pants. Damn, BDU’s had never looked so good. I widened my gaze, backing it off to take in the full picture.

Her dark hair was pulled back in some sort of fancy twist. A few stray wisps caressed from her high cheekbones down the length of her long neck. I tried to picture how she would look with that long hair free and cascading down. How it would feel to fist it as I guided her mouth over my hardness.

The imagined visual was making me stiff, so I took another swig of my Jeremiah Weed, gave a silent nod to the Air Force pilots who had gone before me, and then returned to my perusal. I lingered on her supple chest, appreciating the ample swell before my eyes continued their tour of her body, lest I zone out on another fantasy again. Her stomach was flat and she had a narrow waist that flared out into her hips. Hips I could imagine holding onto with a tight grip while I took her from behind, watching my dick disappear over and over again in her tight heat.

Jesus, Chandler, get a grip! I hadn’t spoken to her, didn’t even know her name yet, but the visceral reactions to her were fuddling my thought processes. There was no question she was it: the one I would be seducing.

How wrong it would turn out I was. Who could’ve guessed that I would be the one to be seduced and left haunted by her? Not me, thus I approached her like a trusting lamb being led to the slaughter.

“May I have the pleasure of this dance, darlin’?” I crooned near her ear. My Texas accent thickened while my body pressed against her, the loud music a perfect cover for being so forward.

She lifted her toffee eyes up to mine and gave a curt nod. “I’d be delighted, kind sir.” A brief giggle revealed her flirty nature. “But only if you give me your name so that my friends here know who I wandered off with.”

The lady had spunk; I liked that. Her direct request also told me she wasn’t stupid. “Lieutenant Marshall Chandler, at your service, Ma’am,” I drawled while bending over to exaggerate my introduction. “And you are?”

“Lieutenant Melody Carmichael. It’s a pleasure to meet you.” Melody winked and extended her hand toward me, the gleaming butter bar on her shoulder indicating she was a second lieutenant, same as me.

I flashed her a grin then took her hand and led her out onto the makeshift dance floor of the O-Club where we boogied, did the Macarena, hand-jived, and even slow danced for the next few hours. We rested for bathroom breaks and to sip on our drinks: Jeremiah for me, Long Island for Melody.

During the small reprieves, we got to know each other through conversation. Melody was an emergency nurse with aspirations to become a full-fledged doctor someday. She was gorgeous and smart. I tried to be suave and serious when I shared my aspirations.

It was my plan to work up through the ranks until I was a Colonel, but I’d not settle for less than Major. I wanted to be the best fighter pilot the Air Force had ever seen. And, of course, to know what every inch of her tasted and felt like before the night was over.

She laughed and swatted my arm when I admitted the last part.

Pulling her close as the strains of Unchained Melody filtered around us, I whispered, “I wasn’t kidding,” against her ear before nuzzling behind it with my nose. “Don’t you want to support the troops, Lieutenant? I leave for war in the morning, darlin’. Send me off with memories that will keep me warm in those heartless trenches.” The plea was begged against her lips.

Melody melted against me and I pressed my lips tighter to hers, waiting for her to give in and grant me passage. It was magical—and hot as fuck—when she did. All sounds of the bar vanished until we opened our eyes and knew it was time to get out of there.

We ended up back at her place, with our hands all over each other as soon as the front door closed. My shirt was gone, hers was untucked and unbuttoned, her full breasts taunting me while I kissed and licked down her neck toward her cleavage.

Her moans from me rubbing my lips and nose over her flesh, went straight to my dick, making it pulse and throb with longing. I was just about to flick the clasp on her bra and release her breasts for my pleasure when she pulled back, bracing a hand against my toned pecs while panting heavily.

“I need a minute, Marshall.” She held up a finger and ordered, “Stay,” before turning and disappearing into her bedroom.

With her absence, my head cleared a bit and I found myself questioning if I should stay and follow through with this. One night stands had never been a problem for me, but all of a sudden, this felt wrong—demeaning.

I actually liked this girl. Like, really liked her. It was easy to laugh and talk with her. She was bright and funny, sassy and daring. Not to mention, drop dead gorgeous. If you’d asked me to describe the woman I would settle down with in that second, my answer would’ve been: “She’s in the next room.”

That final thought was like a bucket of ice water being dumped on my lust ridden haze.

Stop it, Chandler . . . you’re looking for a quick, satisfying fuck to send you on your way, remember? You’re interested in things like how tight her pussy is and what color her nipples are—and whether or not she likes to have them bit. Don’t think about how witty her mind is or the way her eyes twinkle when she laughs. It would be folly to admit how her laugh sounded like angels singing. I also tried to pretend I hadn’t noticed how her eyes were like soulful bits of candy which radiated innocence. Honestly, everything about her was warmth and comfort . . . and home.

My mom would love her.

What? No! Big tits, perfect ass, plump lips that were going to look awesome wrapped around my dick . . .
“Marshall . . .” Melody’s husky voice called from the bedroom effectively halting the battle that was waging in my head.

Looking down, I was startled to discover my hand on the doorknob. I was ready to bolt—or was I? The way I saw it, two choices were before me: I could walk out now and never know what might have been with her, or I could heed her call and go into that bedroom to experience what would undoubtedly be, the most amazing sex of my life.

My dick twitched, making the decision for me. “Coming, darlin’!”

**Honest reviews are always appreciated on Goodreads and/or Amazon**