Just in time for Valentine's Day - a sneak peek at FIVE short stories to be released on February 14th!

Previously published in the Romantic Interludes anthology, these love stories will be available for the first time as stand-alone shorts - for just $.99 on Amazon! The Golden Arrow and the Butterfly by Lissa Bryan

Eros is the god of love, but he has never experienced the emotion himself—despite his inexplicable fascination with a beautiful young mortal woman, Psyche. When one of his golden arrows strikes Psyche instead of its intended target, he whisks her away to Olympus, to save her from the fate of falling in love with the next man she sees. Psyche is terrified when she wakes blindfolded, in a strange realm, in the company of an oddly compelling man who claims to be a Greek god. What happens when the blindfold finally comes off?

“What I have told you is the truth,” he said finally. “I am Eros, and you are on Mount Olympus.”

“But that’s only a myth!” Psyche protested.

“Your friend was fated to fall in love with a man she met at the mall. But I missed when I fired my arrow at her and it hit you instead.”

“No. It’s the first time I’ve ever missed.” She heard frustration sharpen the puzzled note in his voice.

“What does that have to do with why I’m here?”

“Because you were hit by the arrow, you would fall in love with the next man you saw, no matter who he was.”

So, that explains the blindfold, she thought.

“I couldn’t let that happen to you. I’m trying to find a way to undo the enchantment.”

“Have you found anything?”

“Not yet. I’ve sent a message to my mother. If anyone will know, she will.”

Psyche tried to remember. “Who is your mother?”

“Aphrodite. My father is Ares.”

It was Psyche’s turn to be amused. “Love and War?”

“On occasion, they can be somewhat similar,” Eros said and Psyche laughed softly. It startled her because it was the first time she’d laughed since she was kidnapped.

Buy directly from the publisher, or from Amazon on the 14th. 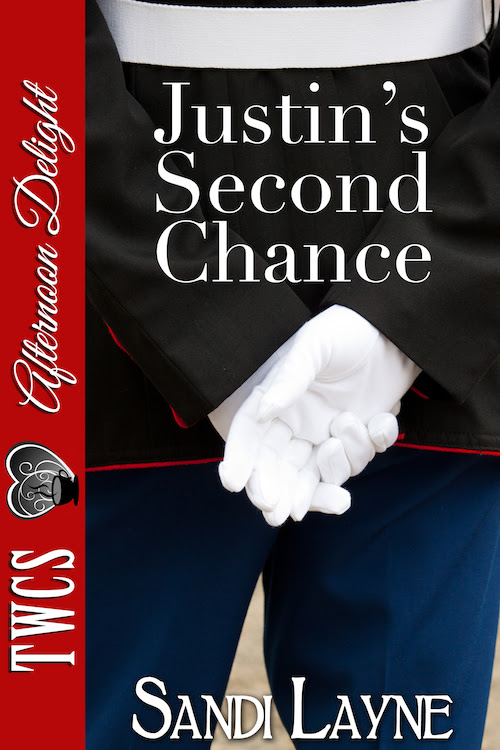 Ten years ago, April Peterson asked her long-time crush and pen pal Lance Corporal Justin Clark for a date. Just a day spent alone together. Though he cared for her more than he had ever let on, he was still in shock after his first military deployment to Afghanistan, and responded in perhaps the worst possible way: He ignored her.
When they meet again, April Peterson Sinclair is a widow with a young daughter. Gunnery Sergeant Justin Clark is hoping to win April's heart and asks for a second chance.

(¯`•♥•´¯)
Excerpt:
He didn’t know what it was, but something inside him threw caution to the winds. A coward dies a thousand deaths; a brave man dies but one. Was that how that quote went? She’d probably know, but he wasn’t going to ask her. “What I’d really like,” he began slowly, kneeling so that they were knee to knee and he could smell the slightly spicy scent of whatever it was she was wearing for perfume, “is something you asked of me once.”
He saw her jaw tighten, saw the muscles in her throat move as she swallowed. “What?”
“I’d like a day to spend with you. Just the two of us. We could share the long versions of our stories, maybe. I could give you a tour of D.C. Just one day.”
“Justin...” Her lips parted, her breath caught, and she studied his face. He grew nervous, wondering what she was seeing. He felt all kinds of vulnerable, more than he felt when he’d been deployed in places far away and quite dangerous. “I’m not ready.”
“Ready?”
“My husband died a year and a half ago, you know? And I, we moved out here for a fresh start. To get, to get away from...some things.” She slid his present to her back under the tree to rejoin the other gifts that waited patiently for tomorrow morning and the eager eyes of a little, red-haired girl. “I’m not ready to date yet, Justin, is what I’m trying to say.”
“All right. How about being ready for a friend?” He offered her his hand.
Slowly, she took it and he rose to his feet, pulling her up with him. “I could use a friend.”
“You have one.”


You can add this title to your Goodreads shelf today!

A Piece of Cake by T.M. Franklin

Emily Valentine is a matchmaker who doesn’t believe in love. Well, at least not the hearts and flowers, see-your-soulmate-across-a-crowded-room-and-the-world-stands-still kind of love. No, Emily is a pragmatist – a scientist – and she’s abandoned her family’s tradition of matchmaking based on instinct and uncanny intuition for a more scientific approach to pairing people up. Emily believes love is more about compatibility and common interests than anything mystical.
But a run-of-the-mill job turns her world on end when swoony cake designer Sam Cavanaugh pops up as a potential match for her newest client. The attraction she feels for him throws a wrench in her plans, but she’s not going to succumb without a fight.
Emily is nothing if not practical. And reasonable. But she’s about to learn that sometimes the best things in life…are neither.

Excerpt:
“Want a bite?”
Emily jumped at the sound of Sam’s voice, relaxing a bit when she saw him holding out a cupcake in the palm of his hand. He rolled his eyes at her suspicious look.
“It’s just a cupcake,” he said, lifting it slightly to emphasize his words. “Well, I shouldn’t say just. It’s double-chocolate with salted caramel frosting, and it’s incredible, if I do say so myself.”
Emily smirked. “Mighty sure of yourself.”
“Definitely. At least when it comes to salted caramel frosting.” He grinned at her. “Go on, take it. I’m relatively certain one cupcake isn’t going to jeopardize your professional objectivity.”
“I don’t know. It’s hard to be impartial about chocolate.” Was she flirting?
“Double chocolate.” Was he?
“Even more so.” She looked away from his crinkling eyes, and stepped back to put some distance between them. He set the cupcake on top of the case, his smile fallen slightly. With a mental eye roll, she reached for the cupcake, feeling more than a little ridiculous about making such a big deal over an innocent conversation.
“Thank you,” she said quietly, peeling back the paper. He watched her carefully as she took a small bite and licked a dab of frosting off her lips. She froze.
“Holy crap,” she mumbled through the cupcake. Sam’s face broke into a smile.
“Good?”
Instead of answering, she took a bigger bite. The cake itself was dark and rich, moist and not too sweet, a perfect counterpoint to the sinfully rich ganache filling and the smooth, velvety frosting. A drizzle of caramel boosted the flavor to eleven on a one-to-ten scale, and Emily closed her eyes as she swallowed, barely stifling a moan of appreciation.
She opened her eyes to find him watching her intently, his eyes focused on her lips.
“This is incredible,” she said, a little breathless.
His gaze snapped up to meet hers. “Thank you,” he rasped, the sound stirring something trembly within her.


Add A Piece of Cake to your Goodreads Shelf here:

Purchase it directly from TWCS Publishing House - or from Amazon on February 14th. 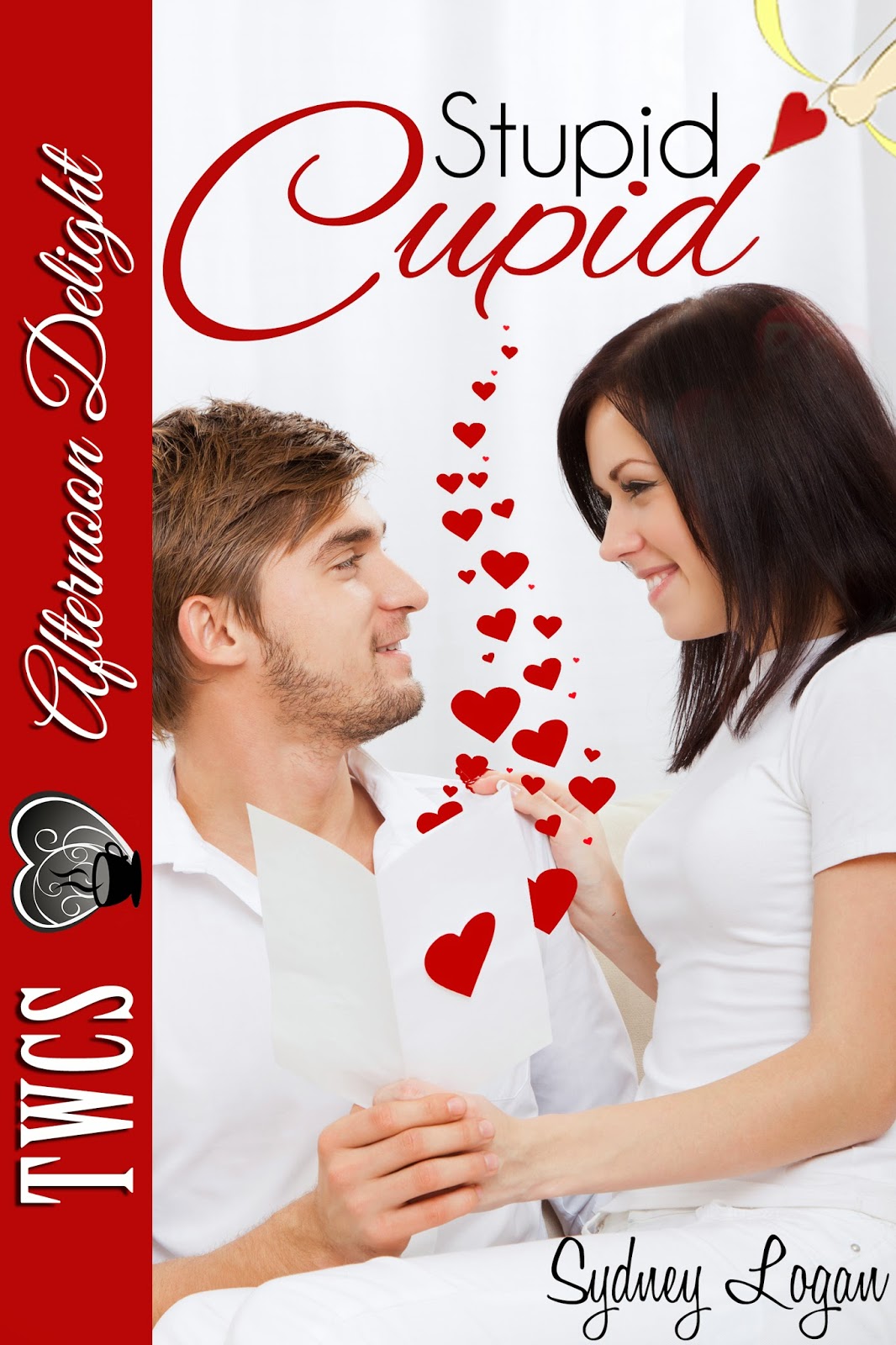 Jada Morgan hates Valentine’s Day, which is ironic, considering she's a writer for a greeting card company. She meets Nathan Reynolds, one of the company’s new graphic artists, and they bond over their mutual hatred for all things Cupid while working on designs for this year’s marketing campaign. As they grow closer, Jada learns Nathan is a single father, and she quickly becomes attached to him and his little girl. When it’s time for the company’s holiday party, Jada assumes she and Nathan will attend together, not realizing he already has a date for the event. Has Stupid Cupid broken her heart once again? A heartfelt story about love, family, and second chances.

Giveaway:
Enter for your chance to win a "Love to Read" T-shirt, Hershey's Flavored Lip Balm, and signed bookmarks from Sydney Logan!

This promotion is in no way sponsored, endorsed or administered by, or associated with, Facebook, Twitter, Hershey's, or Blogger. We hereby release all names listed of any liability. Winner(s) will be contacted by email within 48 hours after the giveaway ends. Let me know if you have any questions or issues by contacting me: @SydneyALogan. - Good Luck! 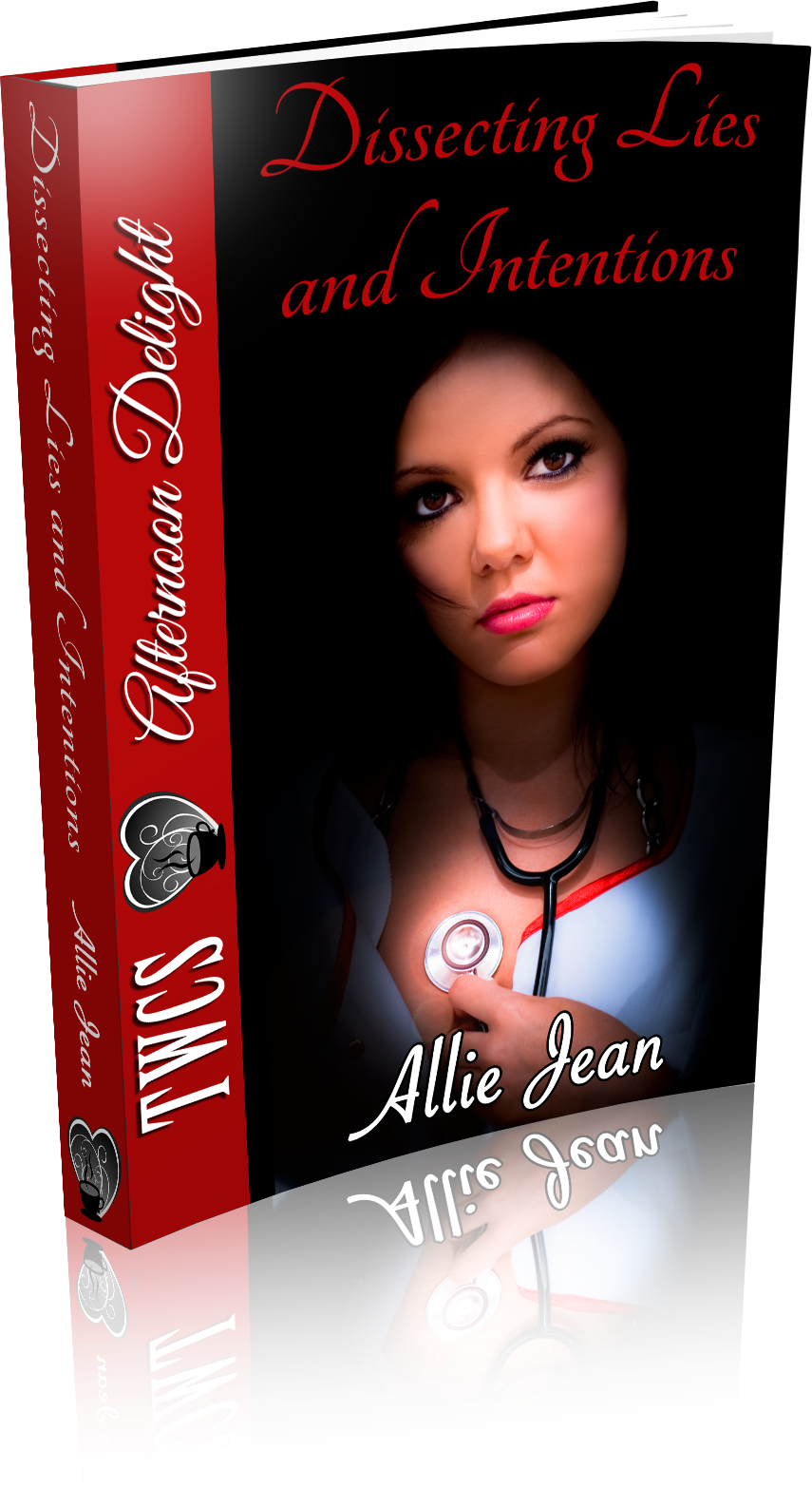 After a less than stellar ending to her seemingly perfect relationship, Christine decided to spend Valentine’s Day at the one place where her mind would stay good and occupied. The Emergency Room had a way making the day pass by quickly, yet when her former fling elects to change his schedule with another nurse, Christine finds herself in a situation she can’t avoid. Can she finally set aside her fears and take a leap of faith? Or will her assumptions about Mitch prove her to be unlucky in love?

Add it to your Goodreads Shelf HERE
Available February 14th on Amazon and TWCS Publishing House.