As Eternal’s memory is recovered so her destiny nears and as her strength returns her evil nemesis discovers her and attacks.


Luna Aeturnus Blurb:
Rural France, June 1925 - The witness to the Moreau massacre, Eternal, is still incarcerated in an asylum, trapped by her amnesia. Only her true love, Edouard, can help rediscover her identity. But the startling truth attracts the attention of The Count, the secret leader of a vampire cult. The Count needs Eternal’s blood to achieve his destiny at the Eternal Hour and he has the forces of evil to help him.
With little time remaining, Edouard must unravel Eternal’s vampiric past, unmask The Count, and plot their escape. But at every step, dangers beyond his understanding lurk in the shadows, and Eternal is vulnerable to attack the moment he leaves her.
With the Eternal Hour at hand and the forces of darkness converging, Edouard and Eternal must fight to rid the world of this evil. If they lose, The Count will reign supreme and unleash the dogs of war and chaos upon the world. Let the final battle begin.


Welcome to Simon OKill's Blog Tour for Luna Aeturnus! I got a chance to get a peek into Simon's head with some of my crazy questions. I'm sure y'all will find it as entertaining as I did!

What is your favorite color of socks to wear?
Eeew sox. Vampire’s don’t wear socks.

Do you wear boxers or briefs?
I am a vampire - I hang free.

If you were a cookie, which would you be?
The last one in the box, I’m always the last one. Sigh!

Name one actor/actress you would love to get naughty with?
As a vampire she would have to be

Do you suffer from sleepwalking?
No!

If you were given a chance, would you enter Big Brother?
Yes as the first singing vampire.

What is your favorite daily wear attire?
My coffin.

What is Eskimo ice?
I have no idea.

If I came to your home and looked inside the refrigerator, what would I find?
Nothing, I drink blood from the source.

Tell me how many hats you have in your house?
None.

How many pairs of shoes do you own?
I don’t need shoes as I prefer going barefoot. I paint my feet black so no one notices.

What's your bad quality?
I am bad!

If you were a t-shirt, what color would you be? Why?
Black, there is no other colour.

If you were a tree, what would you be?
Ebony.

What was the best thing before sliced bread?
Blood in a bucket.

If you were a character from 'Weeds,' which one would you be?
Weeds? Gimmee Trueblood.

If you try to fail, and succeed, which have you done?
All my failures are other peoples’ successes.

Why isn't the number 11 pronounced as onety one?
Just as 22 isn’t pronounced twoty two.

Describe yourself; what do you think about yourself and do you think people perceive you in the same way?
Do we have an hour or two as I am a narcissistic vampire and so perfect.

Which is your most favorite book ever?
Salem’s Lot.

Which is the one television character that you simply adore?
Baby Vamp in Trueblood.

What kind of music do you like?
The Doors - Hendrix - Roxy Music

Which is your favorite genre of movies? (Comedy/Romance/Suspense/Action/Horror)
Horror horror and oh, horror. I die for horror.

What do you do when you feel very sad or depressed?
Sulk in my coffin.

What makes you angry? Are you short-tempered? How do you overcome your anger?
Being so misunderstood makes me want to bite and biting calms me down.

Which is the best vacation you've ever had?
A trip to Mevagissey, Cornwall where BTW the 1977 film Dracula starring Frank Langella was filmed.

If you could have a luncheon with any three people (real or fictitious/from any time period/dead or alive), which three people would you choose and why?
Bram Stoker, Stephen King and Graham Masterton, because then I’d find out how I came into being and drink some of their muse just for a keepsake.

Which is your most cherished childhood memory?
Vampires leave their childhood behind as it will always remind them of frailty, but that said, I do remember dancing with Elizabeth Tudor before she needed the face paint, not bad actually.

What kind of kid were you, naughty or nice?
My first 19 years were spent slaughtering demons in the dark place, once released I learnt how to have such fun. Mozart was a particular favorite. He knew how to party.

If given complete freedom to start afresh, what profession would you choose and why?
Well, vampires don’t actually work, we feed off the brilliance of others and that satisfies their existence, but my favorite muse would be in the arts, I do so love to see a naked canvas come alive.

What is your idea of fun?
Slapping on the white, black nails, lips eyeliner and drink myself silly from as many sources as possible before sun up.

If given a chance to skip work for a day, how would you spend the entire day?
Entwined with my true love.

Which is your favorite time of the day?
The moment the sun dips below the horizon. I cannot bring myself to say the T word.

Are you a morning person or a night person?
NIGHT.

What is the craziest thing you've ever done?
I guess trying to out-drink Errol Flynn and David Niven was a stupid mistake. Damn those 30s were so wild.

What is the funniest prank played on you or played by you?
I mused David Niven just before he grabbed his Oscar, he wasn’t at all drunk, but the first words I put in his mouth came out perfect - “I’m loaded ….” The house was in uproar and he didn’t get the chance to say “…. Down with this Oscar.”

If given a choice, which animal would you want to be? Why?
A cat, they love the night and embrace nature with such freedom.

Which is your most favorite place in this earth?
Mevagissey at night, the lights shimmer across the harbor, clangs of bells, smell the sea. Invigorating.

If you were stranded on a lonely beach, what are the five things that you would want to survive?
5 gorgeous babes for my regular top ups. Yummy. 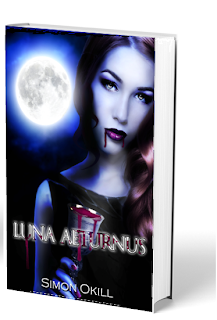 An excerpt from Count Lucien:

Count Lucien:
Lucien brooded, silently listening, waiting to hear her dark music. He could feel her presence; but where and how close. She would never enter a place of worship, but he had been fooled by her. Could his mind violate the sanctity of the church? He tried. He got nothing.
Lucien’s black heart pounded like a sledgehammer in his chest at the thought of his Delicate Rose begging for mercy. He grew a hard on with the thought of her offering herself in reconciliation for their abrupt separation, before he drank every drop of her ancient essence to be Eternal. As for Jacques and Claudette – so what if they needed Eternal’s blood as badly as he did. They could suffer the consequences. Let their addiction burn their blood dry and fry their brains. Her blood was his alone, no more sharing.

I live with my wife, Shirlee Anne in a pretty coastal town in South Wales, UK. We both love Stephen King and had read many of his books and enjoyed their transition to the screen. Due to our love of books, my wife and I dabbled in writing for some years as a hobby. We were approached by a film company to write a paranormal TV series. We struggled most nights and all through weekends to come up with 22 episodes only for the company to go bust. Then after an accident at work, I was forced into early retirement due to disability. I used my newfound skills as a writer to help with my depression. We decided to use our TV series episodes as templates for film scripts and novels. My writing became more serious as certain A-list actors expressed interest in my scripts. I now have 3 books published - Nobody Loves a Bigfoot Like a Bigfoot Babe - Luna Sanguis and Luna Aeturnus.

Luna Historica is the final episode and will explore Eternal’s birth during Khufu’s reign as Pharaoh to her death in the French Revolution.

‘Flip Side’ is one of my most exciting screenplays to date with its unusual slant on a supernatural gangster story that encompasses music and dynamic dance sequences to portray the action. 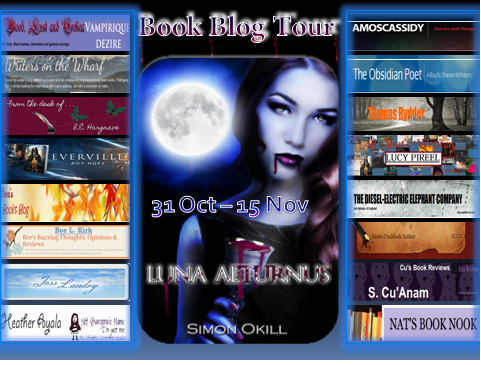