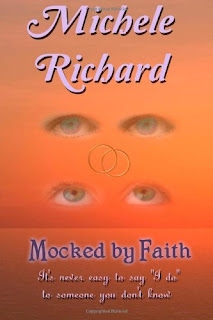 Blurb: For Alexia Cross and Justin McNear, things are not what they seem. Both were born and raised in hidden, gated communities. A place where time virtually stands still and marriages are arranged by parents before a child’s 18th birthday. Alexia is destined to be her community’s first spinster. In a last ditch effort, a husband is found. The only complication? He has no idea he has been betrothed. Will his history of dating outsiders help or hinder his relationship with his future wife? Justin McNear searched outside his church for the woman of his dreams. Returning home after failing, he knows he needs to rectify his life and his faith. Can a woman he’s never met make him whole again? Will this couple end up mocked by their own faith? Follow Alexia and Justin through the trials and tribulations of finding, falling, and surviving each other's love. It’s never easy saying “I do” to someone you don’t know.

I have to admit that when I first started on Mocked by Faith, I wasn't sure what to expect. I knew the story was a religious one, and that it wasn't a standard "popular" religion, and that was about it. Now I can honestly say I'm glad I gave it a chance despite my personal opinions on organized religion.

Alexia is likable at once while Justin, for me, takes a little getting used to. Even at the end of the book, I want to like him, but I can't quite do that yet. At times Justin comes across as immature and impulsive, but Alexia has her moments. Should I hold this against the characters? No, because they are only 18, and have been thrust into an awkward situation: Alexia, this is Justin. Justin, this is Alexia. Now say, "I do." Yeah, can you imagine! This is not a direct quote from the text, but the gist of the situation the reader is met with upon entering Richard's world of The Gates.

The Faith represented in Mocked by Faith is not quite spelled out, a good trick by the author to be sure; leaving the reader no choice but to continue reading the series for answers. (Not that this is a bad thing, mind you!) I detected elements of an Amish set-up, yet for Justin, Alexia, and all the others, their life is not as strict and regimented. They have modern amenities like electricity, nice cars, and hefty bank accounts at their disposal. However, their ways can be old-fashioned, and what some would consider antiquated. One such example is that their Council doctor has to approve any "modern medical treatment" like ultrasounds during pregnancy (there's a small hint for you).

Be prepared to follow the newly-wed McNears as they get to know one another on a personal level at the same time they start their life together. Justin brings a bit of a soiled past to the table, and Alexia offers up a plethora of young insecurity. I assure there is no shortage of emotional upheaval within the pages of this book. What can you say? Ah, young love . . .

I gave it 5 butterflies, what will you give it?