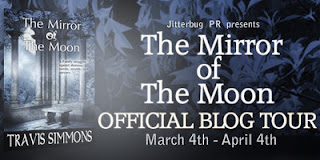 I'm excited to participate as a Blog Tour host with an official Jitterbug PR book release tour! Please welcome Travis Simmons as he tells us a little about his new book The Mirror of the Moon and I ask the question: What did you want to be when you grew up? Also, be sure to check out the rafflecopter giveaway at the end! 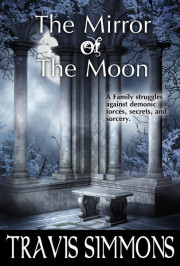 The Mirror of the Moon Blurb:
With the death of one of the companions, Grace must answer for the secrets she’s kept. The path before them is ever lengthening in their quest for Amber. There are changes they all must face, and when Joya enters her trials of sorcery, danger lurks around every corner. The power within Angelica and Jovian is strengthening and with it comes confusion. What are they? It is painfully obvious nothing like them has ever existed before. Why is it at times they seem more one person than two separate people? With all the mystery surrounding their latent power, Angelica stumbles upon a passage in a book of sorcery indicating she is evil. Could she be the Mask prophecy speaks of? Is she destined to turn against her own flesh? To make matters worse, the Well of Wyrding (a giant well that controls all sorcery) has been breached and wyrd itself is spiraling into chaos.

What did you want to be when you grew up?

There were many things I wanted to be when I grew up. In all honesty, writing never entered the picture until I was 14. At that point, reading all the fantasy I could get my hands on, I knew I had to write. I have folders and binders full of the stuff I wrote when I was a teenager that might make for some really good books in the future.
I went through the typical boy stuff: wanting to be a firefighter and/or a cop. After that phase, what I wanted to be always seemed to be swayed by what I was watching. When I was really young I wanted to be a witch (thank you Bewitched) or to live in Miami (thank you Golden Girls). Despite wanting to still live in Miami, I realize I can’t be the type of witch Samantha was.
There were some shows that really got me thinking about a career though. Judging Amy saw me wanting to be a lawyer. The show just made it look so fun, fighting crime using the law and then having a nice, supportive backdrop to come home to. Romance that was quirky, but yet not needed because of the fierce independent spirit I would show. But my interest in shows changed and with it my dream job changed too.
I started watching Chicago Hope, and I loved that show so much. I was addicted to Christine Lahti’s character. From then on, I wanted to be a heart surgeon. She was so fierce and independent and knew what she stood for. People respected her and she was in a position of power. Many people who watched the show didn’t like her because she was too outspoken I think, but that is what really made me like her.
Around the same time our home purchased their very first (and last) set of encyclopedias. I would sit there and read the short entry in the “H” book about the heart. I was convinced I was going to be a heart surgeon just like on Chicago Hope.
Looking back now, I kind of wonder if I really just didn’t want to be a strong willed, fiercely independent woman. Hmmmm.
I spent short mental stints as a chef. For some reasons mom loved the idea of my culinary dreams more than my medical aspirations. My greatest served meal was Ramen noodle soup. It was a delicacy you see, because so often we would have the non-soup variety. I would fold up the fruit print paper towel and serves sparkling water on the side and feast like a king. I think I even envisioned a talk show filming me when I entered my workspace and started up the water.
I could tell this was something of a calling for me. It all made perfect sense with the way my best friend and I used to make masterpieces with our play dough, or even in the gourmet mud pies we baked out back.
When I entered high school and hated most of my classes I realized being a lawyer or a doctor was out of the question. That didn’t really bother me because I had stopped watching all the shows that made me desire those fields. In fact, I hated English too. It wasn’t until our beast of an English teacher made us read any books we wanted and write reports about them that I stumbled upon the fantasy genre. It is odd to me now that I had never even known there were such books. I was reading books like Dragonlance and David Eddings and I had to stop myself because I kept thinking “Wow, I didn’t know they made books that were good!”
I think my mother was least impressed with my wanting to be an author. It is amazing the amount of people that don’t take that dream seriously. They try to bring you down, and they try to make you feel like you won’t be any good at it because you are just you and not destined for greatness so just fall into the fold already dammit! I must admit that writing wasn’t my first choice as a child. I wanted riches and power and an independent spirit (and maybe to be a woman), but I found in writing I have all of those things. In fact, I have all the independent spirits I want, they are called characters and my life is made so much richer for them. 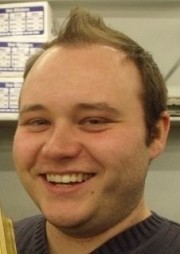 
I have been writing since I was 14. I began writing a book called "The Calling of the Two" and while writing that on and off I started uncovering another idea.

"Yes, this is all well and good, but what about before? What happened in the world before these characters came into it?" I always knew there was a "before" and as I started wondering about it I got ideas. At first they were little ideas but as I discovered the names for my characters a whole story about them emerged.

I started working on The Revenant Wyrd Saga several years back and I am very happy I did because hearing and documenting Jovian and Angelica's story has been one wild ride.

I live in a remote part of upstate New York and honestly just hoofing around my neck of the woods gives me a ton of inspiration for my novels. I love research, and I love speculating on different ideas and theories.

Enter below for your chance to win 1 of 5 print copies!