*I received an ARC copy of Hunted in exchange for an honest review.* 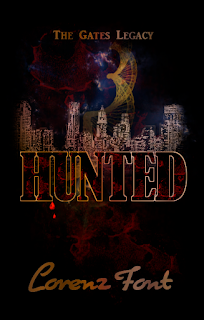 Fanged, red-eyed creatures with a thirst for human blood? Check.

Sensitivity to sunlight and unknown to most humans? Check.

An intricately woven plot line that is sure to enthrall young and old, boys and girls alike? Check!

However, let me begin this review with one crucial warning: Don’t pull back the cover of Hunted until you are clearheaded, and will be left alone until you finish. Interruptions will not be welcome!

Hunted makes you think. This isn't a ‘sit back and enjoy the ride’ type of read; no, this is a ‘grab the reader and make them participate’ type of read. With a large ensemble of characters and multiple subplots the reader needs to have their wits about them to keep up, especially since the POV shifts throughout the book.

Font has created a new vampire world where the mythical creatures of old have been – revamped. (Excuse the pun, but you can read Font’s guest post on why her vampires are different HERE). The predominant change is that her vamps are not immune to disease, and her male lead Harrow Gates is responsible. With this jumping point the author begins a gradual colliding and overlapping of four distinct paths: Harrow, Jordan, Demetrius and Goran, and the Tacks. There are a number of other characters, too, but for me these were the big ones.

Harrow lives with a certain degree of guilt, and is just trying to survive when we meet him. Jordan, on the other hand, is on a course of revenge for the wrongs done to her and her family, and is willing to take down anyone that gets in her way – at first. Goran and his son Demetrius have their own silent issues with each other, but on a grander scale represent the bad guys. Goran has a fixation for red-heads, and what do you know, Jordan happens to be one! The Tacks are where the humans are introduced into the story when Pritchard Tack, billionaire, sets up a secret facility to try to help the diseased vampires of the world find a cure. Why? Because his daughter Allison is one of them.

Tack Enterprises becomes the central hub for the good guys, and where Jordan and Harrow get a chance to know each other. What follows is a humorous yet tumultuous budding romance. He’s diseased, she’s not – so until a cure is found any physical declaration of their feelings for each other is considered a bad idea. You’ll have to read the book to find out if they decide to throw caution to the wind and risk it all for love.

"Yeah, I – have no idea how I got here in the first place." Jordan sighed again. Looking over the dark horizon in the moonlight, the shadow of the lit buildings cast an eerie glow, rendering the sight haunting – foreboding, even. Somewhere out there lived the man she was looking for, the one who had altered her life forever. Haste and impatient motivation would have to take a back seat if she wanted to find him and carry out her revenge. Careful planning was in order. Taking out a man as powerful as Goran without solid preparation was suicide at best.

The thought of Harrow crept into her mind. The vision of his wounded expression never left her. It nibbled at the recesses of her subconscious, reminding her how hasty she had been and how far she had let her anger take her, when she'd dumped all her frustrations on him. She remembered with vivid clarity the wordless derision she'd felt and had manifested in her eyes; the timbre of her voice as she'd ordered him to stay away from her. Ignorance was bliss, and if she hadn't known what was wrong with him, she might still be able to keep herself aloof from the whole situation. Having learned from Allison and Pritchard what the disease was all about armed her with disgust for herself and took away the possibility of the detached approach she would rather have kept out of sheer self-preservation.


Hunted is only book one in The Gates Legacy, and so much is packed into it. I've touched just briefly on some of the many facets, but feel I should add that there’s something for everyone with this tale as long as the reader enjoys the paranormal: action packed fight scenes, tender romantic moments, bouts of humor that will leave you asking if that really just happened, questions answered and more created (it is a series after all), and for that final sweet awwww factor, there’s even an adorable, orphaned, little red-haired girl named Gail. She won the hearts of Harrow and Jordan, so I’ll bet she’ll win yours, too.

I'm a bit of a self-confessed vampire addict, and this book has trace elements that remind me of some of my favorites: Black Dagger Brotherhood, Anita Blake, and even a little Twilight. What are you waiting for? Get your copy of Hunted today (if you haven’t already!)