Today I get to welcome friend and fellow author N. Wood. Recently I reviewed her m/m novel My Bittersweet and today she's back with a new tale to share! So, without further ado:

Let's take a peek inside Ms. Wood's head and see how she handles some off the wall questions:

1. What is your favorite color of socks to wear?  Alternating pink and grey stripes.

2. Name one actor/actress you would love to get naughty with?  Jackson Rathbone of course :D

3. Which is the best vacation you've ever had?  Spent a week in Scotland with my best friend, we've been online buddies for thirteen years. I got to see Glasgow, went on a tour and we even saw a little of that new Tom Cruise  zombie movie being filmed there. The only downside was the distance, after 16 hours on a bus my butt was numb.

4. If given complete freedom to start afresh, what profession would you choose and why?  When I left school I wanted to be a paramedic, so I'd probably do that just to see what my life would have been like had I followed that ambition.

5. What is your idea of fun?  I like taking lengthy walks on the beach with my dogs and my boyfriend, and I enjoy swimming as well. On Mondays and Thursdays I do both so that's fun to me. Get up, have breakfast, walk the dogs, write or edit during the afternoon then swimming at night.

6. What is the craziest thing you've ever done? Well I once shoplifted a dog chew lol. I only had enough money for one and I had two dogs.

7. What is the funniest prank played on you or played by you? On April Fools Day a few years ago I made my boyfriend a big mug of coffee with salt in it and gave him two chocolate brownies as well. He ate the brownies and because they were a bit dry he took a massive swallow of coffee and choked it up everywhere.

8. Which is your most favorite place in this earth? Scotland!

9. Do you suffer from sleepwalking?  No, but I sleeptalk. One time my boyfriend told me that he'd woken during the night and I was talking about soup. Another time apparently there were three things I needed to do for Peter Facinelli...mmmmmm

10. If I came to your home and looked inside the refrigerator, what would I find?  Lots of bottles of diet coke, milk, satsumas, apples, pears, bacon, cheese, butter, orange juice and my boyfriend's asthma medicine lol.

I love asking these questions, I always get the greatest answers! Great job, Nat ;)
So, lovely readers, would you like to hear about her next book? Yeah, me too . . .

Following an accident that rendered him mute when he was fourteen, Alex Carter relocates to the small town of Blackwood with his dad for a fresh start. Having endured ridicule and bullying for the past five years, he isn't looking forward to starting at a new college. Enter Wesley Hunter, a fellow nineteen year old who has been assigned as his guide around campus and his personal translator. Affection can be just as sweet from an unspoken heart. 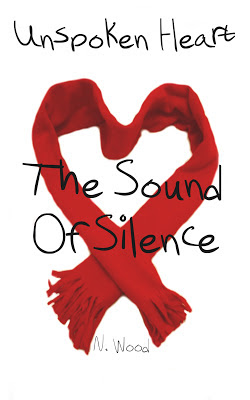 “I take it you like history if you chose it as a subject.” Wes’s voice sounded further away and I turned to see he was leaning against a wall outside a closed door. I figured this to be our history room.

With a last glance to the display, I turned and walked over to join him, giving a small nod. *It’s one of my best subjects. I like learning about the past and our ancestors, things like that.*

“What’s your favorite era?” he asked.

I stopped beside him and leaned against the wall. He turned his head so he could see my response. *I’ve always found Ancient Egypt to be interesting, with all the pyramid building and their different Gods...and the death process.*

“Death process?” He raised his eyebrows in confusion to what I meant.

*Yes, you know, the…process…bandages and pulling brains out the nose,* I signed, trying to explain what I meant.

“Oh, you mean mummification?” I nodded with relief as he understood what I was getting at. He chuckled and shook his head, giving me a light punch to the arm. “Then why didn’t you just say that?”

*Because I don’t know how to sign…that word,* I replied.

Wes tilted his head back and let out a laugh. It didn’t last long as he remembered to be quiet since class was still in session on the other side of the door. I didn’t mind the laughing because it was him, but for good measure I playfully punched his arm like he had done mine. It set him off again and he had to cover his mouth.

*Well what’s our class currently studying?* I asked, changing the subject in an attempt to quieten him.
He stilled his chuckles and lowered his hand from his mouth. “We’re studying the American Civil War.”

If I had the ability to groan I likely would have. As the smile dropped from my face, he tilted his head questioningly.

*I’m guessing there’s not much support for the Confederate side up here,* I signed, explaining the expression he must have seen on my face. *Everyone is going to take the piss when they find out I’m from Texas.*

Shrugging his shoulders, he leaned off the wall as the class ended and moved closer to me so the door wouldn’t swing out and hit him. “You’re a gay Texan, Alex. I highly doubt you’re anything like the Confederates. Besides…” He raised his hands towards my neck. Instinctively I pulled back as far as I could to the wall, but it didn’t faze him. His fingers met the red fabric of my scarf and lightly pulled it higher on my throat to cover the scars, his movements remaining gentle. “This is a new millennium. No one cares about what others believe anymore. They just care about their own beliefs and thoughts - oh, and the Confederates lost big time.”

He grinned wide and stepped back as I threw out my hand. Despite ducking it still connected with his shoulder and he laughed again. He rubbed his arm but I hadn’t hit him too hard. As the hallway became filled with students swarming out of rooms, he moved closer to avoid being swept away with the crowds.

His chuckle faded, overtaken by the sounds of students all around us, but somehow all noise was lost and we had focus only for each other’s eyes. For several seconds he looked as though he was going to lean in and kiss me again, which wouldn’t have been a good thing if we were spotted.

Wesley flicked his tongue out, licking his lips to moisten them and I took the advantage to drop my gaze. The moment was somewhat awkward between us yet seemed completely right at the same time, but here was not the time or place. As the hallway cleared enough, I playfully shoved him backwards and he stumbled two steps before managing to collect himself.

*Laugh it up, Hunter,* I signed, an attempt to break whatever it was that had come over us. *The south will rise again.*

He stroked a hand over the front of his shirt, smoothing the crease that my shoving him had caused. Wetting his lips again as he watched me, his eyes then slowly lowered down my body, stopping when it reached my jean clad crotch.

Where you can find N. Wood:

It was a pleasure having you, Nat ~
Thanks so much for stopping by and best of luck on your new book!