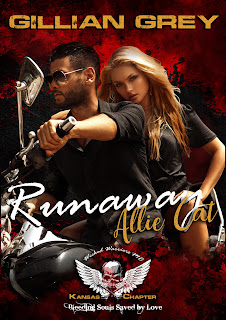 "Anywhere," I say, breathless and desperate.

When my stepfather’s henchmen catch up with me, jumping on a gorgeous biker’s bike is my only escape. I don’t dare tell him who I am, as my stepfather is a powerful man who is obsessed with finding me.

From the moment Chase and I meet, sparks fly, but he doesn’t want to see me as more than some kid in trouble. He has his secrets too, and while he is on one of his mysterious jobs, he takes me to his family so I can hide out there.

I settle in and help his family. They own the local biker’s club, and it’s going under, so we open it up to the public with some live performances.

That is when I run into Chase once more. No longer in disguise, he doesn’t know who I am, and it is my chance to get up close and personal with him.

Each time he returns, I live this double life to be with him. That is until my stepfather’s henchmen catch up with me again.

Running is my only option, but how can I leave now? Will Chase chase this runaway alley cat, or will he let me go?

MY THOUGHTS
Ms. Grey’s debut book is an MC style retelling of a lesser known Brother’s Grimm fairy tale from the early 1800’s. “Allerleiruah,” also known as “All Kinds of Fur” or “Thousandfurs,” among other titles, is not one I was familiar with so I put on my research cap and did a little digging to understand the baseline for this story. In general:
“There is a king who is married to a beautiful woman with golden hair. The queen falls fatally ill. On her deathbed, she makes her husband promise that he will only remarry if he can find another woman who is as beautiful as she is and who has golden hair like she does. The king's grown up daughter looks just like her late mother. Against the advice of his counselors, the king declares that he will marry his own daughter. Not wanting to marry her own father, the princess says that she will only marry a man who can give her three very special dresses and a very special fur cloak. The first dress has to be golden like the sun. The second dress has to be silvery like the moon. The third dress has to sparkle like the stars. The fur cloak has to be made of the skins of a thousand animals and must contain a piece of skin from every different kind of animal in the kingdom.” ~from literature . fandom . com/wiki/Allerleirauh
Since I received an ARC in exchange for an honest review, I understand the book may have had additional polishing prior to publication. Even so, as an early reader, the repetitive nature of the story, minor spelling and punctuation issues, and occasional tense changes were slightly distracting to me. However, once I let myself “just read,” the tale began moving along.
In Grey’s adaptation of “Allerleiruah,” the King is actually a big man in the mafia world and there is no cloak of a thousand furs. The special dresses do make an appearance, as does a fiery female lead who isn’t afraid of getting dirty. Grey also incorporates a nice nod to the MC community and the Bleeding Souls Saved by Love! Collection for which she is writing. The sexual elements given some of the characters ages and backgrounds also gave me pause a few times, but as an erotica author myself (and this DOES count as an erotic romance given the amount of explicit detail and occurences of intimacy), I can’t cast stones.
By the end, Allie and Chase get their HEA, and their tale is told. Some of the other characters made it quite clear they have stories to be told as well, so it’s a good thing Grey has three more books planned for the Kansas Chapter of the Bleeding Souls Brotherhood!
Until the next ride… go ahead and grab your copy of “Runaway Allie Cat” and start getting to know the family.