#RachelReviews THE SENIOR AND THE SURFER by M. B. Feeney #Charity

The Senior and the Surfer by M. B. Feeney 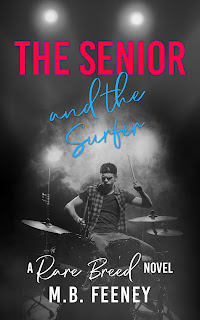 Released November 01, 2021; 292 pages
BLURB:
A senseless attack brings clarity to Rare Breed’s Wes’ life…
Wes Archer is gay.
His friends and sister accept him without judgment and love him for having the strength to live his true life. The band and his friends have become an escape from the misery of living with a homophobic father, and he hates to think how things would be without them in his life.
When he meets Wyatt, a surfer, down at the beach, their relationship becomes another welcome distraction from life at home, and he finally sees a future away from his parents.
But just as Wes starts to grow in confidence, an unprovoked attack threatens to derail his courage and determination.
Can the band, his sister, and Wyatt show him that he can move beyond his past, and toward a happy and bright new future, where Rare Breed reach for the stars?
The third book in M. B. Feeney’s New Adult Rockstar Romance Series.
AMAZON
GOODREADS
BOOKBUB
MY THOUGHTS

In The Senior and the Surfer, we return to the Rare Breed world created by M B Feeney. This time, for Wes’ story, the band’s drummer.
Right off the bat I must applaud Feeney. The Rare Breed world, set in Los Angeles, is one world, one story, and yet the author has been able to present us with three individual tales to date. As a reader, I’m not fond of recapping the same scene over and over. As an editor, I’ll pull my authors up on this. Feeney, however, has manipulated this series with style and grace. While these books all follow basically the same timeline, there are enough nuances and unique scenes to make each story stand alone as Feeney tackles various hard-hitting subjects of adolescence. And while each is an amazing read on its own, they deliver so much more of an impact when read all together.
My understanding is that The Senior and the Surfer was Feeney’s first full dive into the m/m world after tip-toeing around the subject in earlier books. Her handling of the subject matter was beautifully done, and I was easily won over by Wes and Wyatt’s budding relationship. I cheered their good times and lamented their hard times, falling in love with the idea of them.
I admittedly don’t usually give more than 4 stars on a review, but the Rare Breed series has been 5 star all the way for me. Each and every book has been an absolute delight to read. Thank you, Ms Feeney, and write on! Get the whole series HERE!
SURPRISE! There will be a fourth installment to the Rare Breed series, The Sophomore and the Second Chance, and Feeney will be working on it to raise money for Macmillan Cancer Support. Get all the details, cheer her on, and make a donation HERE 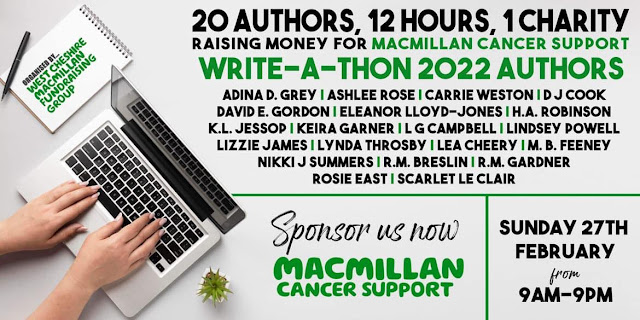 Email ThisBlogThis!Share to TwitterShare to FacebookShare to Pinterest
Labels: #RachelReviews