Her Three Bears by M.D. Stewart 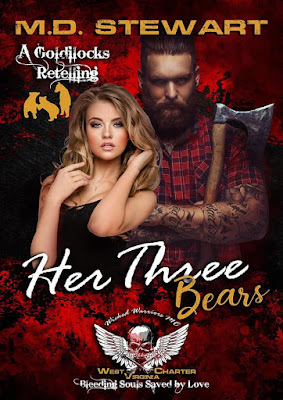 Amber Gold needs to escape and hide from her treacherous family.
Her dad is a mean drunk, her brother is abusive and her life at home is deteriorating fast. When she stumbles on a cabin in the woods, Amber thinks she’s found a safe shelter. Sneaking in at night while the owners are away, she doesn’t realize the danger her heart is in.
Parker “Papa Bear” Kodiak has earned his grumpy, hardcore reputation.
Growing up poor in a rural West Virginia town, he struck out on his own at sixteen. He found acceptance as a Prospect in the Wicked Warriors MC. Through brutality and determination, he became the youngest Sergeant-at-Arms in their history. No one crosses Parker and lives to talk about it.
Someone has been breaking into Parker’s home. While his brothers Max and Bryson aren’t concerned, Parker is determined to make the intruder pay for their crime. But is Parker willing to pay the ultimate price when he finds the golden-haired beauty asleep in his baby brother’s bed?