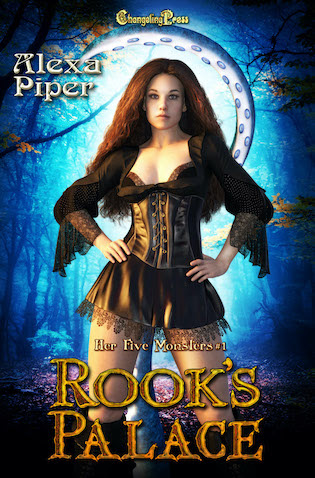 Emilia is excited to start a house-sitting job, even if the house is creepy and more than a little on the odd side — as odd as the owner’s requests. When she finds an unusual gaming console, she is drawn into a lusty video game in which she crosses paths with five inhuman creatures. She is drawn to them all, but when the five men keep telling her that the game is very much not what it seems, Emilia realizes she can no longer play along.

As the path she follows offers not just desire and intense experiences but also sadness, cruelty, and hurt around every bend, Emilia’s resolve firms: she will free the five men, who tell her they are already a family, already lovers. Whatever she has grown to feel for them, she cannot let them suffer if saving them is within her power.

With the rules of a game she doesn’t understand forcing her to play along, Emilia must find a way to get to the end of the game and get everyone out — whatever the cost. The freedom of her five monsters depends on her.

The console that had caught Emilia’s attention was an oval design, smooth silver. She touched the casing, and found that it was warm, polished metal rather than plastic, with a smaller oval display set in the middle. As soon as her fingers brushed against the console, the display lit up with words.

“Play me? Huh,” Emilia said. “You’re strange. How do I play you?” she asked. There was no controller anywhere that she could see. The other wireless ones were neatly lined up beneath their respective console, but this oddity…

The screen brightened, and the words play me blinked at Emilia.

“Right. I want to.” She turned to look around. On the table behind her, on the chairs, there was no controller in sight either, nor did her search reveal one behind the cushions. Shrugging, Emilia hit the screen on the console. She felt the slight give of a button. “Ah.”

The television set flickered to life, and a suitably eerie voice echoed to Emilia from hidden speakers.

“Welcome to the Rook’s Palace,” said a male narrator. On the screen, the camera was following a path through a thicket of trees. It wound toward a castle that rose like a waking dragon in the distance.

“Wow, this looks super HD,” Emilia said. She pulled one of the floor cushions stacked to the right of the TV toward her and sat down cross-legged.

“Brave traveler, you have chosen to walk the paths to the palace, but beware,” said the narrator. “These paths are full of the pleasures of the flesh, and none that walk them may escape the lust and desire of those who call the palace their home.

“Traveler, should you choose to continue, there is a mission you must carry out.” The screen washed out, the scene shifting from the outdoors to a room. It could have been a room right here in Blakely’s castle. As the camera did a slow turn, Emilia gasped a little as a tall, dark-haired figure came into view. At that exact moment, the man turned and looked at the camera, almost as if he’d heard Emilia’s gasp. His dark hair ran down his back, and he wore what was probably supposed to be some sort of stylized Victorian garb. The pants were tight enough to show off muscular legs, and the pressed white shirt with the silver buttons — half of which were undone — showed a broad chest and a narrow waist. The man, whose hair trailed down to the small of his back and half hid his face, looked straight at the camera. His eyes were the color of amethyst, and a wild emotion stirred in their depth for a second before the man shut it down.

“Lord Radovan, the vampire prince, has been hidden away in the palace’s highest tower. Traveler, if you dare, it is your mission to free Lord Radovan from his captivity.”

Emilia wanted to look at this strange vampire prince more. The video quality was good, uncannily so, everything looked real. It was almost like all she had to do was reach out her hand, and she’d be able to touch the amethyst-eyed vampire prince.

Emilia lifted her right hand, but before she could actually try reaching for the vampire, the camera moved. It went for a window and flew straight out, down toward a hedge maze.

“The palace grounds are full of riddles and challenges. Those who guard the path and the palace will not be assuaged by anything less than taking pleasure in your body, Traveler,” the narrator said. “They will demand you give yourself to them, and if they have no mouth or know not how to use it, they will take pleasure on you regardless, split you open and fill you with their need.”

Emilia felt like she should be taking notes for her chat room work. This was good enough to make warmth run down her spine, to make her shift a little on her floor cushion.

“Traveler, if you wish to proceed to the Rook’s Palace, you must consent now to have your body used. On the path to the Palace, your body will be your token. If you dare not, you may turn back, though you will never know what pleasures hide behind these walls. If you consent, your pleasure will end only once Lord Radovan is set free from his tower.”

The maze opened up to the path again, and the camera rushed back to the spot it had first been in, the one with trees to either side of it. Words wrote themselves across the screen.

“Traveler, do you consent?” it read. “Say yes, and proceed. Say no, and never return.”

Once more, Emilia looked for a controller. The button she’d pushed on the console had gone dark now. She looked back up at the screen… 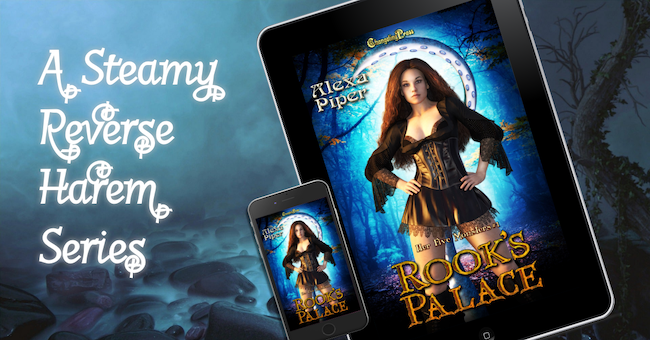 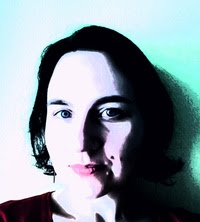 Alexa Piper writes steamy romance that ranges from light to dark, from straight to queer. She’s also a coffee addict. Alexa loves writing stories that make her readers laugh and fall in love with the characters in them.