A Family Affair (Long Live the King) by Nicole Banks 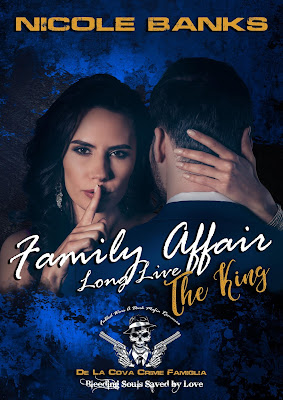 Long live the King...until a Queen takes the reign.

In a Cuban crime family run by men, nothing was more disappointing than Claudia's birth. Outcast by her father and shunned by her brother, she spent a life time plotting, never forgetting what should have been hers by birth-right.

Despite bidding her time, waiting for her unworthy brother to screw up his leadership, he did one thing right––produced an heir. But nothing saves him from tragedy. One so great, it causes the De La Cova heir to skip town... and puts Claudia right where she belongs––in position as the Queen.

Finally under her leadership, she takes the family business in her direction, shaping the organization to her satisfaction... until her nephew returns wanting the throne he believes is his.

Claudia has a shock for him, though. She isn't giving up her empire without one hell of a fight, and if that means spilling family blood to keep it, then so be it. After all, it wouldn't be the first time.

A Fabled retelling of THE LION KING