#RachelReviews: The End of August (Part One) by Rue Volley

THE END OF AUGUST (Part One) by Rue Volley 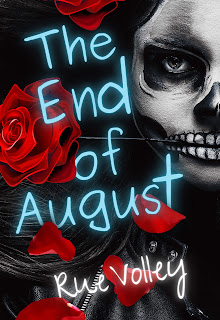 Release Date: October 13, 2021; 315 pages
BLURB:
It's 1985.
Everyone is wearing a Swatch Watch and carrying a Trapper Keeper.
Goonies, Back to the Future, and The Breakfast Club are killing it at the theaters.
Super Mario Brothers is a lifestyle.
Posters of Duran Duran and Madonna are on every bedroom wall.
But for fifteen-year-old, August East, the biggest news is the move his family made to the odd little town of Whynot, Ohio, a cute boy named Keller West, and, of course, that whole murder thing.
*This is a DUAL POV*
BUY LINK (99c for a limited time!)
GOODREADS    BOOKBUB
MY THOUGHTS

A tale of finding acceptance and love while delving into the darker sides of life.
Rue’s covers and blurbs have always been eye-catching, and although I’ve followed her on social media for years, this was my first foray into actually reading one her works. (Thank you for the ARC opportunity.) As a child of the 80s, this doesn’t disappoint. From subtle mentions of Chuck Taylor’s to the Stars Wars glasses we all collected from the Happy Meals to the all-important soundtrack of the decade, The End of August knocks it out of the park as a walk down memory lane. As a lover of all things ghostly and paranormal, August also wins my heart.
August East, Keller West, Shylo, and the fabulous sibling duo of Vincent and Evie make up the perfect pentagram-oriented five-person team as they dig into the history and bowels of Mill House. The big question is, who is being protected? Something we won’t learn until part II releases next year.
Additional thoughts  (not shared elsewhere)
There were some assorted issues I found while reading which went beyond a misplaced comma here or there. As an editor, and knowing this was an ARC which would be finalized before publication, the handful of inconsistencies, some spelling, and misused punctuation I could overlook. However, as a reader, one of my biggest pet peeves, what I call “recap overlap,” pushed me to take a star. While some readers don’t mind re-reading the same scene from multiple POVs, I do, and often end up skimming and moving on. There are ways to show all the sides of the story without retelling the same main part.
Please note, this is my personal opinion, and should not detract you from experiencing the delicious tale unfolding under Rue's talented pen. The End of August is not to be missed!
Posted by From the desk of... R.E. Hargrave at 10/16/2021 01:58:00 PM

Email ThisBlogThis!Share to TwitterShare to FacebookShare to Pinterest
Labels: #RachelReviews