Saving Her Soul by Reagan Phillips 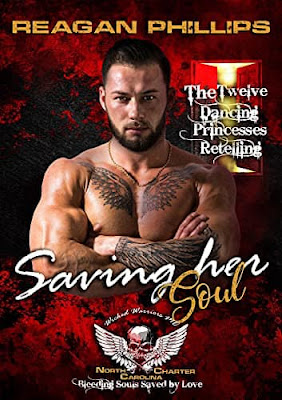 The King of the Wicked Warriors MC: North Carolina Chapter has a problem. Someone is screwing his daughters, and he wants their heads.
Suspecting the culprit is a member of his own club, he hires out, offering a monetary reward for any man who can bring him the trader's identity.
Griffen Thomas has lived the nomad life since his PTSD from Iraq caused friction in his home chapter of the Warriors in Vagas. He's been on the road, traveling town to town, paying his way with odd jobs, until word of the King's reward finds him.
How hard can it be? Trail the girls at night. Find who they're meeting. Collect the reward. Only the King's daughters are good at not getting caught. All except the youngest. She's sweet and friendly and has curves in all the places curves should be. Imagining anyone taking her virginity but himself becomes Griff's obsession.
One by one, he takes down the girl's suitors, leaving the sweet Caroline to the last. One night with her would be worth a priceless amount, but will the hunter become the hunted? Or will Griff have the strength to turn Carolina in, knowing the punishment the rest of the sisters have faced?
Bleeding Souls Saved by Love! A Fable Retelling of The Twelve Dancing Princesses

PLEASE VOTE for Saving Her Soul on