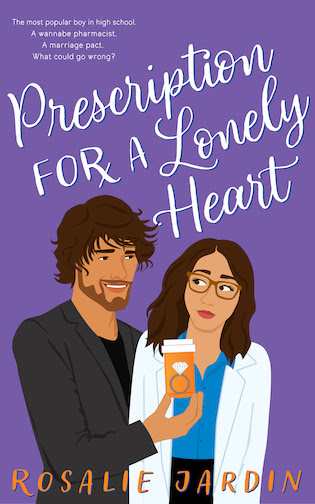 The marriage pact was made during a lazy day at the beach, half in jest, and seemingly forgotten by the boy who started it.

But ten years later, Kay hadn’t forgotten. She’s still shy and introverted, not interested in relationships. So when Adrian reappears in her life—two years early—and asks her to marry him now, she surprises herself by agreeing.

So now she must deal with her mother’s disapproval, his brother’s hostility, and a load of self-doubt. Can she forge a real relationship with Adrian? Has he really changed from a ladies man to someone she can trust? Will she be able to let go of everything she’s ever thought she wanted and reach out to grab a new future?

Prescription for a Lonely Heart is the first book on the “Hearts in Glencoe City” series. This friends-to-lovers standalone romance features a marriage pact, a calm-but-sassy heroine, a himbo with a heart, and a HEA guaranteed.

“We should make a marriage pact.” My eyes almost popped out. My heart, too. “You know? If we both aren’t married by the age of thirty, we’ll marry each other.”

“Obviously if we end up marrying other people, the deal is null and void,” he pointed out. It did nothing to quash my resistance. “But you’re one of the nicest girls I know and I like hanging out with you. And I’m pretty sure that you can tolerate me for more than five minutes.”

My eyes were as wide as saucers. Was he for real? “I’m going to pretend I didn’t hear all that, Adrian. You know you’re talking nonsense, right?”

“I’m not! Do you think I’m kidding? Why wouldn’t I make this pact with you?”

“Because a lot can happen in twelve years!” I stood up from my beach chair, exasperated. Where was this coming from? Did he conveniently forget this past year when we barely said a word to each other? The summer heat was messing with his brain. “People change, things change, the world changes! Pacts are made one day and broken the next.”

“The world can change all it wants, but if I’m able, I’ll always keep this promise no matter what.” The way he looked at me, eyes wide open with a hint of boyish charm, reminded me of why he was popular with the ladies at school. “I get that things may change and we may both end up married to other people and we could laugh about this later. But I can’t think of a better person to take this kind of pact with.”

My eyes fluttered closed. I willed myself to remain calm, and ordered my heart to keep steady. I had to admit that there was something flattering about being “proposed to” (and I’m using the phrase loosely) by the most “desirable” (or at least that’s what I’m told) guy in school. Between that wild wavy black hair, dark eyes, and tanned skin, he was pleasing on the eyes. If you asked everyone else what made Adrian so attractive, they’d point out his toned muscular body or that bright smile of his. But it was his kind heart that mattered to me more.

If anyone could get me to consider agreeing to this kind of pact, it was him. 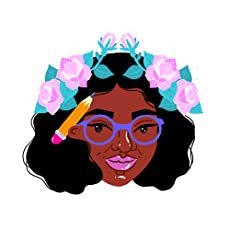 Rosalie Jardin is the pen name an American-born author living in British Columbia. Writing has been a passion since she was five, beginning with telling stories- which often got her in trouble with her teachers because they kept catching her writing instead of doing her schoolwork.

Rosalie considers herself to be living the glamorous geek mom life and channels that energy into her writings and her debut novel. Her characters rumble around in her head, demanding to have their stories told and, like any good author, she is just doing what she’s told.