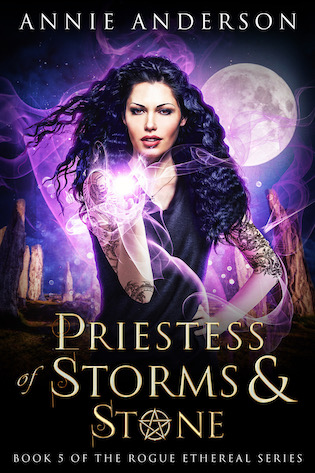 
If there is one lesson I’ve been taught in my life, it’s that fairies are the absolute worst.

Finding a fledgling succubus in Faerie is like locating a needle inside a realm-sized haystack. With a guide I can’t trust and a goal more ephemeral than smoke, my odds of success are tenuous at best. Not to mention, as the last Elemental in existence, I have a giant target painted on my back.


Because one half of Faerie wants me dead, and the other half wants to use me as a sacrifice to open the gates to Earth. But I swore I would find my quarry, and I will. Even if I have to rip the entire realm apart to do it.
There is a storm coming to Faerie, and that storm is me.

Goodreads / Amazon
—
EXCERPT:
It was never a good sign to be drinking bourbon at ten in the morning, but after the week I’d had, I figured I was due. Self-medicating with alcohol wouldn’t take the sting out of my grief, in fact, it was likely to make it worse. But I’d needed a teensy little breather from my housemates after the last truth bomb had been dropped, and wrapping my head around my new knowledge required booze.
I could feel Della’s eyes on me, her acute vampire gaze boring a hole in the side of my face. She wanted an answer to her question, and she likely wasn’t going to leave me alone until I gave her one.
When are we leaving?
That question echoed against the walls of my brain with enough force to give me a headache. Melody was alive. She was alive, and my sister was dead.
But that didn’t make a lick of sense. Melody died right in front of me. I watched Aurelia send her soul on in a way only a phoenix could do. I watched her body burn in the flames of a funeral pyre. I needed answers before I could answer Della’s question.
Because I wouldn’t be leaving to hunt her down unless I was sure this wasn’t some kind of trick. I’d been tricked too many times in the last week, and I wasn’t falling for another one.
“Melody is dead, Della,” I whispered before taking another sip of bourbon, refusing to face my bodyguard. If I looked at her, I’d see either pity or censure, and I couldn’t deal with either.
“Then why is her son gone?” Della pointed out a big hole in the “Melody’s dead” argument.
Shit, fuck, and damn. I made a promise to Melody to keep her son safe. If it wasn’t Melody who had her son—and I highly doubted it was—then I’d have to go get him.
In Faerie.
Aces.
But hadn’t I earned a break? Hadn’t I earned the right to let someone else take up the slack?
You made a promise. You swore. You can’t turn away just because you’re hurt.
Those words cut through my thoughts sharp enough to bring tears to my eyes. I did. I made a promise to make sure her son was safe. And I’d keep it. Maybe it would make my soul burn just a little less. Maybe if I did this one thing, losing Maria wouldn’t hurt so bad.
Yeah, I doubted it.
I sniffed back the sting of tears, tossed back the rest of the bourbon, and managed to set the glass down without smashing it. I’d been on a smashing kick for the last little bit, and my living room had borne the brunt of it. At the time, I’d wanted to destroy everything Maria had ever touched. If I could just break it, burn it, wreck it, then it would have been like she wasn’t stamped all over every molecule of my house.
Wasn’t that stupid?
Like I wouldn’t see her every time I closed my eyes.
“Okay, I’ll give you that,” I muttered, finally answering Della’s question. “But I can’t just bust down the door to Faerie and find her. If it is her. We need way more to go on than a note and a can-do attitude.”
I peered down at myself. I had on black shorts and a black tank top. It was good enough for summer in Denver. All I needed was some flip-flops. Had I brushed my teeth today? Shrug. Was I wearing a bra? My tank had a shelf bra in it. It would just have to do. Plus, Barrett wouldn’t give two shits about what I was wearing. I located my flip-flops in their spot by the door, shuffled my feet into them, and raised my hand to snap my fingers.
But Della pounced on my hand before I could complete the task.
“What?” My whole body was on red alert, my eyes searching my demolished living room and relatively untouched kitchen.
“You can’t go out like that,” Della whispered furiously, her face a picture of panic.
Frowning, I looked back down at myself. Yep, all my parts were covered.
“It’s summer. Shorts and a tank aren’t going to turn any heads no matter how much ink is on display.”
A dawning realization lit up Della’s face before she winced. “You haven’t checked a mirror since you got back, have you?”

Annie Anderson is a military wife and United States Air Force veteran. Originally from Dallas, Texas, she is a southern girl at heart, but has lived all over the US and abroad. As soon as the military stops moving her family around, she'll settle on a state, but for now she enjoys being a nomad with her husband, two daughters, an old man of a dog, and a young pup that makes life... interesting.
Website / Goodreads / Facebook / Twitter / Instagram / Pinterest