B@@K REVEAL: A Touch of Malice by Scarlett St. Clair 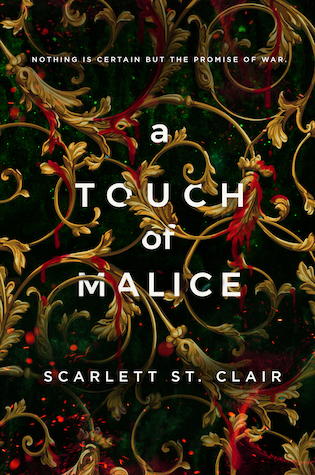 Persephone and Hades are engaged. In retaliation, Demeter summons a snowstorm that cripples New Greece, and refuses to lift the blizzard unless her daughter calls off her engagement.
When the Olympians intervene, Persephone finds her future in the hands of ancient gods, and they are divided. Do they allow Persephone to marry Hades and go to war with Demeter or prohibit their union and take up arms against the God of the Dead?
Nothing is certain but the promise of war.

Scarlett St. Clair lives in Oklahoma with her husband. She has a Master's degree in Library Science and Information Studies and spends a lot of time researching reincarnation, unsolved murders and Greek mythology-all of which made it into her debut novel, When Stars Come Out.
Website / Goodreads / Facebook / Twitter / Instagram / Newsletter