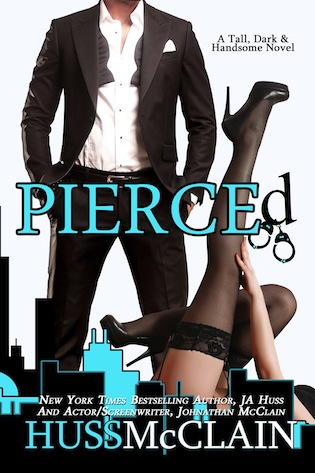 PIERCE
I regret what I did to Myrtle. She’s the best assistant I’ve ever had and I’ll play along—for now—because I want to make things right. But… come on. Me? A submissive? Ha. Myrtle Rothschild might have the upper hand at the moment… but I’m bringing my A-game. I’m gonna take back control.


She can wear her hot, thigh-high latex boots. She can crack that whip all she wants. Hell, I’ll even let her leave marks.


But I’m about to school Ms. Rothschild in the art of who’s the boss.
And she’s about to get Pierce-d.

Goodreads / Amazon / Barnes & Noble / iBooks / Kobo
—
EXCERPT:
MYRTLE
“Knock, knock?”
I look up from my computer and see Pierce, standing in the doorway of my office.
“Can I come in?” he asks.
“You’re the boss,” I huff.
He smiles. Tightly. Like he’s unsure how to proceed.
It’s just all so different.
“Uh… so how’s things?’
“Things?” I ask, raising one perfect eyebrow. “Do you have a specific example of said things?”
“Well, no,” he says, coming inside to take a seat in front of my desk. “Nothing specific. Just… wondering if you have time for a special project.”
We both look at my desk. Which doesn’t have a single file on it. Not even one sheet of paper. My Post-Its pad is still crisp and every pencil in my little pencil can is sharp. I think it’s pretty obvious that I do nothing in here all day.
But I’m still angry at him. So if he thinks I’m gonna be the first to admit I don’t actually have a job to do and I’m just wasting corporate money, he’s mistaken.
“I’m pretty busy,” I say.
“Yeah,” he says, sighing. “I know. And I don’t want to take advantage or anything, but I could use your help.”
I have my reading glasses on, so I do that head-tilt thing where you look down your nose at someone. “With what?”
He looks around. Plucks a pencil out of the pencil jar. Taps it to his head as he thinks.
He doesn’t have a project for me. He just wanted to come in here and feel me out.
We both know this.
But then he gets an idea. I swear I can see the little light bulb go off in his head. “The Halloween party.”
“What about it?”
“We… need… well…”
“Pierce?”
“What?”
“You don’t have a project for me. And I don’t even have a job here.”
“Of course you do! You’re the VP—”
“Of social media, I know. The little plaque outside my office says so. But we both know there’s no social media department. Not to mention, I’m not even on social media and have no idea how it even works.”
“You don’t have socials? How did I not know that?”
“Well, you did think I was the Sexpert. So I’m just going to assume you don’t actually know anything about me.”
“How can you still be pissed at me? It’s been months! I gave you a promotion, and an office, and—”
“Again,” I say, putting up a hand to cut him off, “I do realize all that. And once again, it’s all meaningless. You don’t even know what a social media department does.”
“It’s not meaningless.” He tugs on his suit coat. “And I’m well-versed in socials. I was Snapchatting just last night.”
“With who?”
“Uh…” He looks over his shoulder, like he needs a second to think, then says, “Valerie. She’s my chat friend now.”
“You know I can tell when you lie, right? Your left eye does this little wink thing every time.”
He huffs, then leans forward in his chair. “How long will you continue to do this?”
“Do what?”
“Punish me.”
I laugh. Stop. Then laugh again. It’s a little bit of a guffaw with a healthy dose of maniacal thrown in for good measure. “This is not me trying to punish you, Pierce. This is me biding my time.”
He lifts up one eyebrow. “Biding your time until… what?”
“Until I have the perfect diabolical plan to pay you back.”
He sits back in his chair, breathes deep. “So that’s what you need? Payback?”
“I was publicly humiliated. A woman doesn’t just get over it, Pierce.”
He winces when I snarl his name. “You hate me.”
“People look at me funny now, you do realize that?”
“Look at you funny how?”
“Like I’m hiding some secret sexual fetish side.”
“Aren’t you?”
“What do you want?”
“I mean, you do come off as… kind of a…”
“A what?”
“You know. Like you’re into the whole Red Room spanking thing, right?”
“Anastasia Steele? You’re comparing me to Anastasia Steele? Please.”
“Well, you wear those tight pencil skirts… and those sexy secretary glasses. Plus, I know you read that smut in here. You don’t even use an eReader. Everyone can see the covers. I used to have little Christian Grey fantasies when you used to look at me. Before… ya know, you decided to hate me.”
I laugh. And it’s not even maniacal. It’s real.
“Why is that funny?”
“My dearest Pierce,” I say, still chuckling, “you are no Christian Grey. If anyone is Mr. Grey in this relationship, it’s me.” 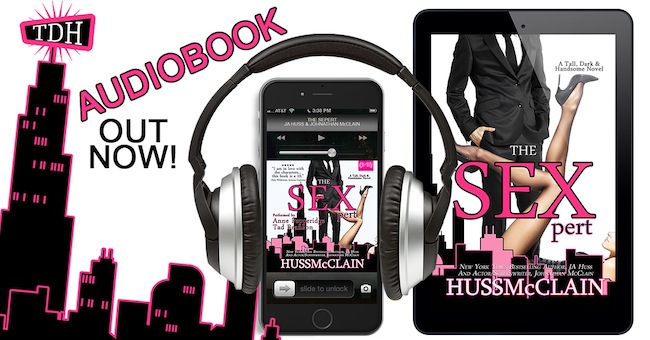 Two accomplished writers come together to create unforgettable sexy romance. JA Huss is the New York Times bestselling author of 321 and has been on the USA Today bestsellers list twenty-one times. Johnathan McClain is a veteran actor and writer whose work, either performed or written, is probably airing on at least one of the channels on your television right now. You can contact them on their website www.hussmcclain.com or find them at their social links below.
STALK JULIE
Facebook / Twitter / Instagram / Amazon / Bookbub