RELEASE TOUR: It Happened at the Park by Ryan Jo Summers #GIVEAWAY

IT HAPPENED AT THE PARK
by Ryan Jo Summers 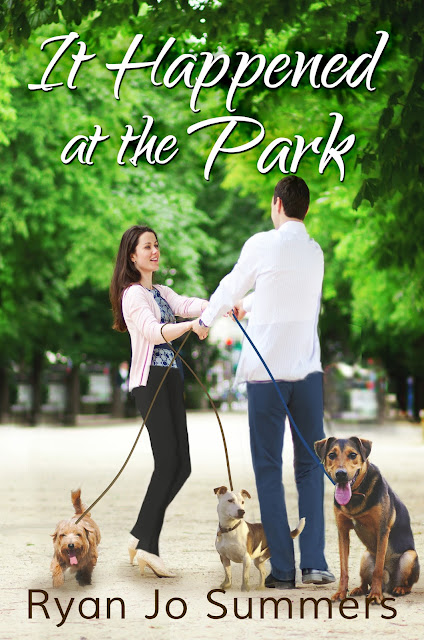 Practical city planner, Cassidy Grant, just inherited her sister's beloved dogs. Except she's a career girl more into heels and matching accessories. She's not a dog mom. Worse, she is required to take the furry darlings to the dog park.

Jilted at the alter, Ethan Sheppard finally got a dog. And he loves their bonding trips to the dog park. He's also the secret cartoonist whose drawings poke fun at the city leadership and might hurt the mayor's chances at reelection.

After Cassidy and Ethan meet, she asks for his help to manage the pups, and along the way, he learns she will be fired if she can't identify the cartoonist to her boss. But telling her will cost his job.

Jake pulled eagerly at his leash, his long tail whipping in the air as they neared the park entrance. Swinging the gate open just enough to allow them through, Ethan unhooked the leash, releasing Jake. With a bark, he was gone, racing to join his canine pals.

Looping the leash through his belt, Ethan stuffed his hands in the pockets of his jeans and studied the attendees. He offered a friendly wave to some of the doggie moms and dads that he knew. A few of the dogs came up, wagging around, begging a pat, before racing off again.

Ethan spun around at the feminine purr behind him, feeling himself go tense. “Yep, he loves these morning runs,” he replied to the brunette standing almost eye to eye with him. He’d figured out pretty quick Gwen was hot into him weeks ago. The fact that she came to this park, when there were others closer to her, was a good indicator. She never brought a dog, so he surmised she just came to prowl around, sniffing for available males. And it seemed he was pretty high up on her list of desirable ones. So far, he’d been unsuccessful in convincing her he didn’t return the favor. He wasn’t into needy lionesses on the hunt. She had a way to make him feel like a chunk of raw meat.
She inched closer, enough for him to breathe in her almost overpowering perfume. Some floral stuff mixed with more flowers. Sort of like walking into a funeral parlor full of sympathy bouquets. Her ample bosom brushed his sleeve and he inched further back.

“And what about you, Ethan? What do you love in the morning?”

He could imagine what she wanted to hear, and he wasn’t about to encourage her. He rocked back another step. “Coffee,” he replied instead. “Bacon and eggs. Pancakes.”

Her hopeful smile slowly faded. Whatever she might have said back was lost when he heard a cry of frustration and a gleeful bark. Whirling, he looked for the source of the sounds.

He recognized the little brown and white ticked dog racing freely now that his leash was dropped. Or pulled from the hand of the woman in bright red heels. Heels? At a dog park? Her black business suit and red hat looked equally out of place. And didn’t she know you were supposed to take their leashes off inside the fence? Apparently not, because the other little dog was still attached to her leash as well, wrapped around the woman’s wrist. Now that her partner was free, the little blond and white dog spun in circles, mad to join him. In her hand the hapless women clutched a cell phone, wedged up near her ear.

Rocking back on his heels, he took in the show, smothering a smile. Remi, full of freedom, darted just far enough to stay out of reach but close enough to keep the woman in pursuit. The woman, a pretty, petite blond with a serious up do topped by a rolled brim chenille hat, stumbled along in her heels and all but dragging the scruffy Chi/terrier along. She alternated between hissing at Remi through clenched teeth and then pushing the phone back to her ear to talk rapidly to someone.

Seeing she wasn’t making much ground, Ethan settled himself on a bench to watch, arms spread out comfortably. Gwen faded away like a ghostly specter. He remembered Remi, a Parsons Russell terrier and Australian Shepherd mixture, as being a handful on the best of days. The smaller one, a terrier/ Chihuahua and question mark, always struck him as a cute, well behaved pooch. Except, he’d never seen the pair here with the blond. He’d definitely remember her.

“Remi!” She whispered fiercely to the little dog, who was having a delightful time, barking over his shoulder at her. She pressed the phone back up. “No, Adam, I agree we have to stay on schedule with this project. Any delay now could be disastrous. Tessa, come on! Yes, I have a meeting tomorrow with Mr. King and I should have some solid answers then.” She lowered the phone, eyes cutting into the dog. “Remi!” She slapped the phone back to her ear. “What? No, everything’s just fine, why do you ask? Where am I? Oh, out enjoying one of the offerings of our fine community. It’s such a pleasant morning, I thought why not, right?” She offered a strained chuckle.

It was all Ethan could do to hold back his laughter. Clearly, she was trying to hold a meeting of some sort. Didn’t she know a park, full of barking dogs and yelling people was the last place for that?

Finally, she hung up the call, tripping over Tessa’s leash. Checking on Jake, Ethan climbed to his feet. He’d have to save these dogs from this woman or this woman from herself, he wasn’t sure which.

Ryan Jo Summers is a North Carolina writer who pens romances with a twist. They may contain any number of elements: Christian, humor, mystery, paranormal, sweet, shape-shifting, or time travel. Her dad is a songwriter and his aunt wrote poetry so writing must be in the family genes.

She makes her home in a century-old mountain cottage, with a menagerie of adopted pets. In her spare time, she likes to gather with family and friends, paint ceramics or canvas, potter in the yard, bird-watching, or read, play chess, Mahjongg or work word-find puzzles. She might take her dog and head deep into the forests and rivers near her home to plot the next big scene or story. Like her dad's aunt, she writes poetry as a means to cope with life's pains.

She collects lighthouses, shells, driftwood, and anything to remind her of the shore.