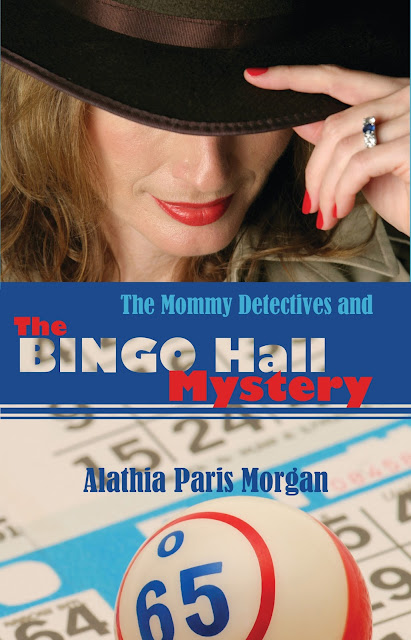 Sunni Wilson, child-wrangler extraordinaire, thought raising twin preschoolers and a teenager was the hardest thing she’d ever do, but that was before she joined the local moms’ group and plunged headfirst into life-threatening hijinks.

A shady character, suspicious packages, and a kidnapped aunt are only the beginning when the moms decide to take the law into their own hands to stop the drug dealers infiltrating their town.

Join Sunni and her friends through the joys of motherhood, kooky neighbors, and hair-raising adventures to find the ones threatening all the group holds dear…their families.

“Wasn’t your niece supposed to pick us up?”

“She was and she’s never late. I wonder what happened.” Before Aunt Marie could call Sunni, Kristi pulled up to the sidewalk with a screech in her SUV.

“Hop in. Did the guy already leave that we’re supposed to follow?” Kristi asked through the open window.

“He’s over there, but it looks like he’s about to leave.” Carolina pointed to Zach as he got in a Monte Carlo from the ‘90s that was a goldish color.

Aunt Marie got in next to Kristi’s two daughters while Carolina took the front seat.

“Do you really think we should follow him?” Aunt Marie asked uncertain since he'd been so nice to her.

“I’ve never followed someone before, but we don’t want to lose him if that is the plan.” Kristi responded pulling in directly behind him at the stop sign.

“Come on, that was the plan we had before, but no more fast driving or he’ll know you’re following him.” Carolina urged motioning toward the disappearing vehicle.

“All right, but where’s Sunni?” Aunt Marie gave in with many reservations.

“Flynn actually managed to get a rock stuck in his ear so they are at the emergency room having it removed. She called me, but I had to pick up the girls from school and race over here. I barely made it on time.” Kristi glanced over her shoulder at Aunt Marie, “Didn’t she call you?”

“Aw crap. I had the phone on silent during bingo.” She started digging through her purse for the silent phone.

A sudden stop, caused her to grab hold of the seat in front of her for support.

“Blast it.” Kristi muttered as the gold car made it through the red light and several cars got in between them.

“Hey, Kristi it’s okay. We should let a few cars be around him so he won’t know we are following him. Don’t change lanes when he does unless he’s turning somewhere.” Aunt Marie cautioned.
“I watched some videos last night on the art of surveillance and how not to be spotted by your prey. Since he’s seen us and kind of knows who we are then we have to be extra careful.” The buzzing of her phone interrupted Aunt Marie’s lesson.

“Sunni, is Flynn okay?” She placed her finger in her ear to block out the noise from the two women arguing how far back they should stay now that they were in a residential area.

“He’s fine except for the rock stuck in his ear. We’re just waiting for the nurse to call us back so they can it taken out safely. I’ll call you back once we’ve seen the doctor to find out how the surveillance is going.”

Aunt Marie didn’t have a chance to ask anything else because Sunni had stopped listening to the phone and was trying to keep Flynn from kicking the soda machine to make a free soda come out. Aunt Marie hung up to concentrate on the drama in the car.

“He’s stopping at that house on the left. Drive by and we will circle the block to find a place to park.”

“Duck everyone.” Carolina cried out as they started to pass where Zach parked.

“Carolina! We’ve talked about this before. No yelling in the car unless someone is actively shooting at us.” Kristi admonished taking the corner on two wheels as she began to hurry so they wouldn’t miss anything that Zach did.

Kristi expertly parked between two vehicles so that she was facing the street with what they assumed was Zach’s house. It was just two house to the left of the street they were on and they had a full view of everything that went on in the yard. Hopefully he wouldn’t notice her vehicle just around the corner because, Carolina could get really loud at times.

“Girls, I feel bad spying on him. He really helped me out with my panic attack today. He was a gentleman.” Aunt Marie protested now that they were parked and she had a chance to regain her equilibrium from their crazy three mile chase.

“That is what this whole exercise is about. We will find out if he is selling drugs and if the sweet old woman in his clutches needs to be rescued we can help her.”

Carolina was just getting started on her theories so it was looked like they were in for a long afternoon.

Join the release party takeover of The Bingo Hall Mystery.
Alathia is celebrating the arrival of her fourth book and the first in this series.