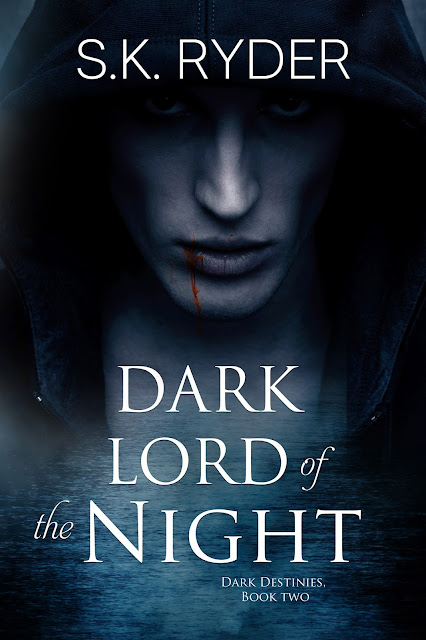 The only thing standing between a new vampire and eternal darkness is the fragile mortal woman who claims his heart.

Youngling vampire Dominic Marchant struggles to master his deadly instincts as he hunts the urban jungles of South Florida. He keeps his hunger confined to the blood of the guilty with help from Cassidy Chandler, a human woman who can literally touch his soul. Their love is his last remaining tether to humanity, which is tested beyond endurance when powerful forces from his past introduce him to terrifying new appetites he could never have imagined.

His efforts to protect Cassidy from the depravity overtaking him push their relationship to the brink of shattering. Refusing to give up on the man who is her heart, she takes an unthinkable gamble to save him. But is she fulfilling an ominous prophecy that ensnares them both? Or has she become just another pawn in a cunning game played by the five-thousand-year-old vampire who claims Dominic as his own?

Desperate to rescue her from a fate worse than death, Dominic strikes a perilous bargain with his greatest enemies only to face an impossible choice--embrace his darkest self…or destroy the woman he cannot live without.

Eddie marched across the bed and head-butted Cassidy’s scrunched-up face. Then he gave Dominic’s nose a thorough sniff. Any other night he would have been elated at this sign of trust and acceptance from his little predator brother. All he felt now was an inexplicable anger. With the tips of his fangs showing, he snarled at the cat.

Saucer-eyed and flat-eared, Eddie bolted backward as though blown by a wind. He thumped off the foot of the bed with an uncharacteristic lack of grace and hustled out the door.

Cassidy sat up. “Okay, that’s it. What is going on with you? What the hell happened out there?”

Dominic studied the ceiling. “I’m not sure.”

“What do you mean you’re not sure? Did you kill anyone I know?”

“Non. Nobody you know.” Though that would have been so much simpler to explain.

A small fold creased the skin above her freckled nose. “But someone did die?”

He told her in French.

“I get the bastard part but not the rest,” she said, her words clipped with agitation. Her lack of comprehension of his first language was yet another sign that their minds were currently far from one.

“He died before I ever touched him,” he clarified. “Apparently I scared him to death.”

She stared at him. The corner of her mouth twitched before she gave a small cough that sounded suspiciously like a stifled giggle. “Oh. Really. I can’t imagine how that might have happened.”

He shot her a sour look.

“Your alter ego must have been terribly disappointed, poor baby.”

“Beside himself,” he muttered. He couldn’t meet her eyes anymore.

After a brief silence, she said, “But that’s not what you don’t want to show me, is it?” The disappointment in her tone scratched at his heart, but he remained still. “You know better than that. I know you do.” She cupped his face in one hand. “I’m here for you, my love. Always. No matter what. We’re a team.”

How could he exist with her knowing what he had almost done?

He gathered her close. Emotion squeezed his words into a harsh whisper. “I made you a solemn promise that I will be by your side as long as you will have me. On my eternal life, this is an oath I will not betray.” And he would do nothing to motivate her not to have him. Nothing at all. “But I need time. Just a little time. To think about some things. On my own.”

“Vampire things?” she wondered against his chest.

He loosened his hold far enough to meet her eyes, making no effort to hide his hunger for her, nor his love, or his gratitude. “Oui.”

“Don’t I know all about those by now?”

“Perhaps too much,” he admitted. How she stayed sane knowing all she did about his hellish world mystified him.

Her eyes glistened, but her voice remained steady. “I see.” She inclined her head in a tiny surrender. “All right. Maybe I should think about some human things. For a change.”

He kissed her, tasting all the resignation and disappointment she felt—and feeling all the hope in her tender response. Always hope. “J’taime, mon amour,” he murmured, pressing his forehead against hers. “I am yours. No matter what, I am yours. Never forget that.” 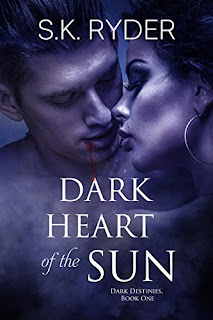 DARK HEART OF THE SUN

His future is already written...in her blood.

Rookie journalist Cassidy Chandler wakes to an ugly bruise on her neck, a hole in her memory, and a fiancé who seems to know more about what happened than he's telling. It's enough to make Cassidy call off the engagement and move out, even if that means trading a posh South Florida mansion for a dilapidated beach house. Unfortunately, she also trades one devious man for another questionable character in her unexpected new roommate: the darkly enigmatic and exasperatingly French Dominic Marchant.

For Dominic Marchant secrecy is a matter of survival. As a newborn vampire with dangerous enemies, he's sure the headstrong young woman invading his lair with an unknown vampire's mark on her throat is about to get him killed. But the charming Cassidy resists his every effort to make her leave and even embroils him in her own tumultuous life. Before he knows it, she has stolen his heart and helps him rediscover his lost humanity. Now he's fighting to protect her not only from the ancient vampires hunting him, but also from his own deadly desire for her.

But her secretive ex isn't done with her yet, and neither is the dark prophecy Cassidy and Dominic's unlikely relationship has set in motion. Together they are swept up in a battle where nothing is as it seems, love and deception are the weapons of choice, and the only way to survive is to risk everything--for each other.

S.K. Ryder is a software developer by day, a scribe by night and answers to Susan any time. She writes the type of stories she loves to read: heart-pounding adventures full of supernatural mysteries and relationships between strong, compelling characters. Though she calls South Florida home, she has also lived in Germany and Canada and has traveled widely, usually in the hot pursuit of wild and scenic nature. When not debugging code, complicating her characters' lives or plotting her next rafting adventure down the Grand Canyon, she can be found beach combing, scuba diving, sailing or just hanging out with a good book. When push comes to shove, she can also bake a halfway decent cake and stand on her head, though not at the same time.