L@@K at ME! Forever's Fight by Marissa Dobson #GIVEAWAY 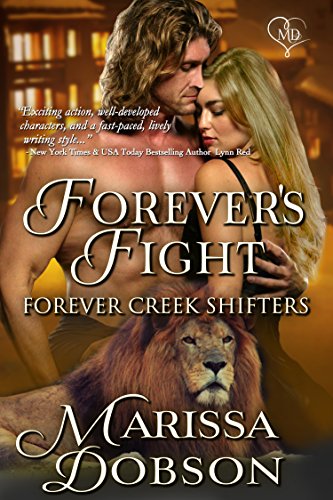 Fighting for love and family.

Patrick O’Reilly left behind his medical practice when he and his siblings were forced into hiding. Determined to live through the war against their species, they vow to serve their kind. Patrick will risk it all to ensure none of them end up as experiments in a government lab.

Clarissa Greenwood worked all her life to become a scientist and to get the position at Hathaway Medical where she thought she would be able to find cures for diseases. Instead, she is witness to experiments on shifters. Disgusted by the truth, she gathers as much information as she can, and flees. She wants no part of the experiments—even if the cost is her life.

Shifters Underground was created to serve their species, not to help a human who had worked for one of the organizations that was hunting them. A message from a trusted shifter leaves them with no other option but to search for a woman who might be able to help them. A treacherous journey brings two destined mates together. Now Patrick and Clarissa must work together to protect not only each other, but all the shifters who fight for their lives, for love, and for family. 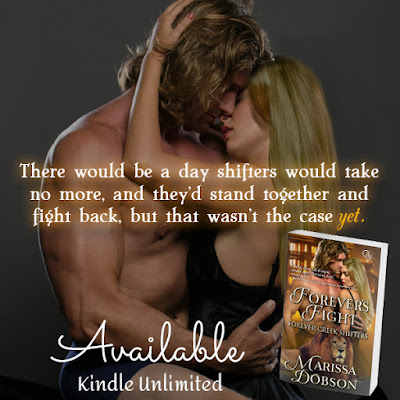 “Beast?” She rose up to rest on her elbows. “You’re going to shift?”

There was a mixture of terror and excitement in her eyes that made him want to tease her, but he resisted the urge. “No. My beast is always within me, even when I’m in human form. There’s no need to shift.”

“What a relief. I’m not sure I’m ready to see your animal yet.” She paused, averting her eyes. “Mind if I ask what your second nature is?”

“Second nature. So proper.” He smirked. “I’m a lion.” He spoke with ease because unlike the rest of the world, he didn’t see the animal side of him as a curse or an experiment gone wrong. To him, it was a blessing, something he was proud of. Though times were tough right now, things would get better. He’d see to it.

“I wasn’t sure how to word this…this…ability.” Seeming nervous, she bit her bottom lip. “I’m not even sure ability is the right word.”

“Shifting is a magical thing, and even though the world thinks I should be ashamed of it, I’m not. My lion is as much a part of me as my internal organs. The human society that we live in just doesn’t accept those who are different, but we’re here just like everyone else, and we want to live in peace.”

“I just want you to understand who my siblings and I are. We’re no danger to you or any other human. We’re always in control of our animal, no matter what form we may take. That’s what Hathaway Medical and the rest of the government organizations don’t understand. We shouldn’t be experimented on, nor should any other human.” He hated that he sounded like he was lecturing her, but if he was going to take her back to Forever Creek, she need to understand his kind. He didn’t want any surprises later that would send her running. Once she knew their location, if she got spooked and ran off, she’d be a liability.

“But the government doesn’t classify you as human.” With that statement, she wasn’t able to meet his gaze.

“What about you? Do you think I’m human?” Silence thickened the air until he wasn’t sure she’d answer.

“You look human enough to me.” She reached out and laid her hand on his chest. “You feel human, too. That’s all that matters to me.”

He placed his hand over hers. “This is just one side of me, kind of like a coin. Will you still feel the same way when you see my lion?” 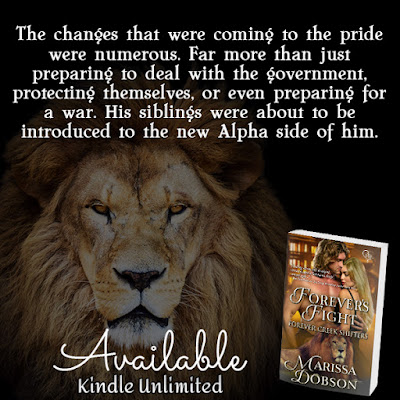 Born and raised in the Pittsburgh, Pennsylvania area, Marissa Dobson now resides about an hour from Washington, D.C. She’s a lady who likes to keep busy, and is always busy doing something. With two different college degrees, she believes you are never done learning.

Being the first daughter to an avid reader, this gave her the advantage of learning to read at a young age. Since learning to read she has always had her nose in a book. It wasn’t until she was a teenager that she started writing down the stories she came up with.

Marissa is blessed with a wonderful supportive husband, Thomas. He’s her other half and allows her to stay home and pursue her writing. He puts up with all her quirks and listens to her brainstorm in the middle of the night.

Her writing buddy Pup Cameron, a cocker spaniel, is always around to listen to her bounce ideas off him. He might not be able to answer, but he’s helpful in his own ways.