SWEET AS SUGAR
The Celebration Township, book 5
by Stacy Eaton 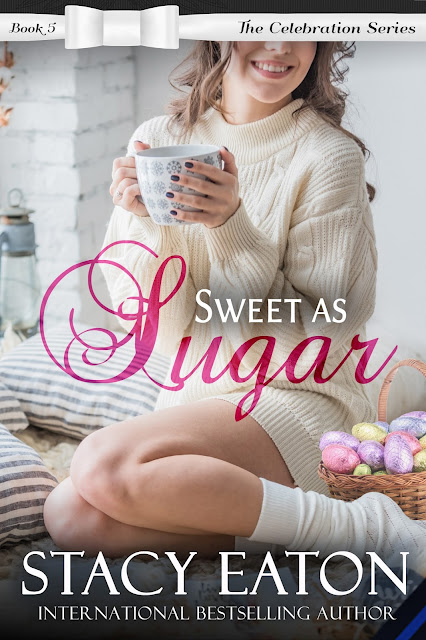 Missy Moresco might be Celebration Police Department’s police dispatcher, but she’s also got her thumb on the pulse of the township. When FBI Agent Casper Princeton shows up in town on a case, Missy and Casper go undercover to protect the real reason he’s there by pretending they are a couple.

With Missy’s snarky comments and Casper’s quick comebacks, these two find it hard to keep a professional distance. When Casper needs to rush home to a family emergency, Missy is torn on whether it’s a good thing or a bad one. Just when she decides it doesn’t matter, Casper shows up on her doorstep with his five-year-old daughter.

Can Missy and Casper keep the fake relationship going while they wait for his case to come to a head, or will his daughter and his job come between them before Easter arrives?

It had been like this for the last two hours. I still had four hours left of my shift, and I was dead tired. I hated working in snowstorms, especially when they surprised us. We had expected four to six inches, and the storm stalled over us and dumped a foot of snow in several hours.

If it were light and fluffy, it wouldn’t have been as bad, but this stuff was heavy and causing havoc everywhere: Power lines were down, trees were falling, cars were stuck on every roadway in the area.

The worst bit was that I was also dispatching for Dexter Township tonight. A massive tree fell down on their dispatch tower, and we were their backup while they repaired it. It made everything twice as bad.

“Hey, Missy, I know you’re busy. It’s Todd Cummings over in Dexter.” Todd was a police officer in the neighboring township. He was a young guy, only on the force a couple of years, but a good officer and not too bad to look at either.

“I’ve got a guy here trying to get through to you. He says he has official police business to attend to in Celebration, but we have two big trees down on the road. Do you by chance have any road crew that could head over this way?”

You have got to be kidding me, I thought. If he has official business, then he is probably in law enforcement of some kind—which means he should understand how serious our situation was right now.

“No, my crews are up the creek without paddles right now. We have trees down everywhere, and my plows are leading my police cars and ambulances around trying to get them to where they need to be.”

“But he says it’s important. He’s with the—”

I cut him off. “I don’t care if he’s the president of the United States. We’re in emergency mode up here, Todd. You know that. I don’t have anyone who can come down there and remove a stupid tree right now. Close the damn road and turn his ass around. There are no police officers available to help with whatever official business he might have anyway, so tell the city slicker to turn the hell around and go home. He can call our chief or Thad after the storm is over and speak with one of them then.”

I snapped. “Todd, I have been on one call after another for the last two hours. I have two calls holding right now, a house on fire, and a guy who just cut his hand off in a snowblower. My head is killing me, I haven’t peed since I got here four hours ago, plus I’m starving. I don’t have time to listen to his whiney ass even if he did get through. Tell him to take a hike. There are people that need my attention right now, and he is not one of them. Did you get that?”

“Um, yeah, we got that,” he answered, his voice subdued.

“Good.” I hung up to answer one of the two lines that were flashing as I heard the fire chief calling out for another fire truck to respond. The house on Cedar Street was fully engulfed. Damn, that was a shame, but I didn’t have time to feel for them. Later, I would, but now, I had more work to do.

Fourteen years later, Ian Dugan needs a break from life and ends up crashing his vehicle and waking up in the hospital to find Linda watching over him.

Can Linda forgive Ian for leaving her alone as a pregnant teen? Will Ian be able to forgive Linda and himself when he learns of the daughter he never knew about? Find out on New Year’s Eve if Ian can erase the tears and find something to cheer about.
Amazon ✯ B&N ✯ Kobo ✯ iTunes ✯ Goodreads

Jason Hayes loves working as a nurse and living in Celebration Township—or he did until Riayn Simmers showed up in town, and a secret from his past is threatened to be exposed.

Riayn Simmers is shocked to find her college love-and the man she had called a heathen-residing in the same town as her aunt. Now Riayn needs to decide if she can handle sticking around to run her aunt’s bakery, My Baked Buns.

Corrine Wagner is determined to make a good life for herself and her son while hunting for the perfect man to complete her family. Unfortunately, with her crazy schedule of school and work, her patience begins to run thin with her constantly-in-trouble, five-year-old son, Tommy.

Nolan Tigues has lived across the street from Corrine his whole life—and carried a torch for her almost as long. When Nolan tries to help Corrine with Tommy, she takes it all the wrong way. She can’t believe Nolan thinks she’s a bad mom.

Can Nolan find a way to prove to Corrine that he cares about her—and about Tommy—as more than just a friend, or will Corrine push away the man who could give her everything she’s dreamed of her whole life?