L@@K at ME! Liberty by Kim Iverson Headlee 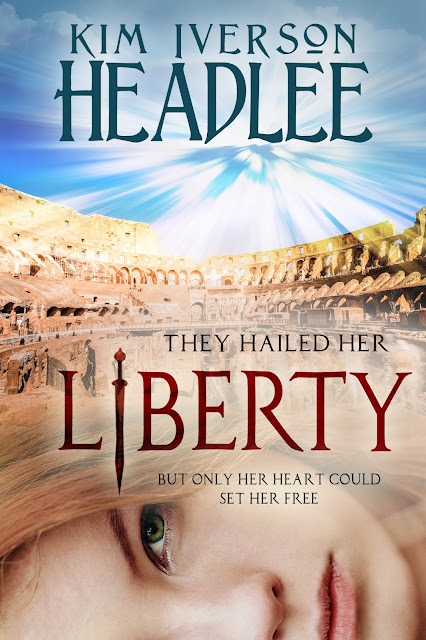 How hard would you fight for a chance at impossible love?

From the critically acclaimed, award-winning pen of Kim Iverson Headlee comes the thrilling, poignant tale of love across a vast social divide.

Betrayed by her father and sold as payment of a Roman tax debt to fight in Londinium's arena, gladiatrix-slave Rhyddes feels like a wild beast in a gilded cage. Celtic warrior blood flows in her veins, but Roman masters own her body. She clings to her vow that no man shall claim her soul, though Marcus Calpurnius Aquila, son of the Roman governor, makes her yearn for a love she believes impossible.

Groomed to follow in his father’s footsteps and trapped in a politically advantageous betrothal, Aquila prefers the purity of combat on the amphitheater sands to the sinister intrigues of imperial politics, and the raw power and athletic grace of the flame-haired Libertas to the adoring deference of Rome's noblewomen.

When a plot to overthrow Caesar ensnares them as pawns in the dark design, Aquila must choose between the Celtic slave who has won his heart and the empire to which they both owe allegiance. Trusting no man and knowing the opposite of obedience is death, the only liberty offered to any slave, Rhyddes must embrace her arena name, Libertas—and the love of a man willing to sacrifice everything to forge a future with her.

Marcus Calpurnius Aquila sprawled on his belly across the cushioned and linen-draped marble massage table, his head, arms, shins, and feet jutting over the table’s padded edges. As the male slave worked eucalyptus-scented unguent into the aching muscles, Marcus could feel the tensions of combat seep away.

Too bad the man couldn’t work out the knots in Marcus’s relationship with his father, Sextus Calpurnius Agricola, governor of Britannia province.

Citing “official business” yet again, Agricola had declined to witness Marcus’s gladiatorial bout in Londinium’s amphitheater this afternoon. His opponent had fought well, causing Marcus in his scanty armor to work up a sweat that, judging by the reverberating high-pitched cheers, had all the women swooning with delight.

Never mind that Marcus, who fought under his cognomen, Aquila, the Eagle, remained a perennial favorite with the crowd. Agricola never missed an opportunity to point out that his arena exhibitions—and the resulting private liaisons with adoring female spectators—flirted with the precipice of social acceptability and could damage Marcus’s political aspirations.

🌟Special ebook discount March 3-7...pick up your copy for only 99cents on all sites🌟