The story of Kate, Kyle and Reed continues in this second novel of The Perfect Series.

Kate (Katherine) Monroe is finally coming to heads with the decisions she’s made in the past to keep herself distracted at any cost. Learning to move on and forward with the conflicts in her life is harder than she expects though. With Kyle continuing to attempt reconciliation and Kate’s mom back at home, avoiding and running are no longer an option.
All along Kate’s mind and heart are consumed with Reed, but she fights to push her feelings and desires to the side. Despite the obvious pull and connection she has with Reed she finds it difficult to let him in… and trust in herself. However, Reed’s perseverance and patience never wavers and eventually he uses the one thing that had always brought them together… tennis.
As Reed and Kate begin to embark on a new relationship they face the past and the present head on. Along the way, new challenges and emotions arise testing the direction of their future together.
Can Kate forgive herself and trust Reed in order to latch onto the one emotion she needs most… love?

“Jesus, Katherine,” he mumbles as I kiss my way across his jaw and over to his ear. “What are you doing to me?”
“Kissing you,” I whisper in his ear and brush my lips against his ear lobe.
“Mmmmm hmmmm.” His hands move to my waist and guide me onto him. I’m straddling his lap and his fingers dig into my hips. I rush my hands into his hair and his head presses all the way against the couch, the leather giving in to my demands. Our tongues clash against each other exploring as if it’s our first kiss, yet knowingly anticipating our next ridge or groove. My heart races in ways I never knew possible. My hands run down to the hem of his button down shirt and to the top of his pants. I start to pull at his shirt to un-tuck it, but his hands come around and lock around my wrists restraining me from pulling anymore. I whine into his mouth.
“Why?” I mumble against the softness of his lips and smile.
“This is the first time I’m in your house and I just met your parents… maybe the second time,” he jokes and then nibbles on my bottom lip.
“Grrrrr,” I grumble in his mouth. “You are always being too good.” His eyes narrow at me and he let’s out a rough chuckle.
“Katherine, I think you know that’s not true and I’ll show you just how bad I am when we are back up at school.” His hands snake up to my shoulders wrapping around the back of my neck. Pulling me towards him and his lips find mine again. Softly he kisses me across my jaw to my ear. “Patience,” he whispers.
“I don’t want to be patient,” I pout as I push my body into him. He laughs into me and un-straddles me from his lap. We face each other and I smile shyly at him feeling a little funny by my boldness.
“Stop,” he says, and his hand latches onto my pinky finger gently rubbing it. “Don’t be embarrassed. I don’t like you having to be patient either,” he says, just before he plants a firm kiss to my forehead. I lean myself against him and rest my head on his chest. His arms wrap around me tightly making my insecurities fade. As I take in his familiar pine and masculine scent he shifts us back against the arm of the couch allowing me to snuggle myself even closer. 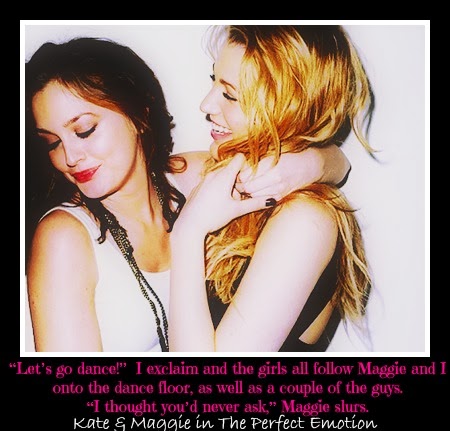 Melissa Rolka grew up in the Chicagoland area all of her childhood and has always had a love of writing. She started by keeping a journal at a young age and then in high school she started writing poetry. A couple poems were published anonymously. Then in college she majored in Philosophy, which required lots and lots of writing. After graduating from Marquette University she traveled west to Los Angeles. There she worked for the Writers Guild of America and found herself submerged in the writers world. She worked on small writings, but never pursued them. On the side she became involved with a small theater group. Eventually she made her way back to the Midwest, where her heart belongs, and worked in business for several years. She found love, got married and has two beautiful children. Being at home has allowed her to keep following her love of reading and writing.The Perfect Distraction is her first full length novel. A second continuation of this story is in the works with hopes for a third. When Melissa is not writing she is caring for, playing with and loving her two kids. In between taking care of her family and writing she almost always has her nose buried in her Kindle.