For your reading entertainment today, I present a blog tour stop for Raven's Quest packed with goodies. Read on for blurb, excerpt, and an awesome Rafflecopter giveaway for multiple prizes! 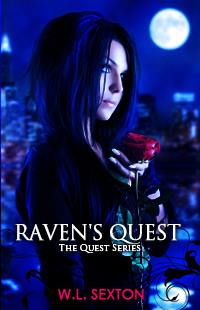 Blurb:
The Quest Series revolves around three women who are worlds apart but connected in more ways than one.
The first book is Raven’s Quest.

We embark on Raven working as a Marketing Director at Stage Records who gets caught in a love triangle with the new CEO of Stage Records. She starts to fall in love with him as his old flame returns to the picture. With a broken heart Raven runs to Napa Valley to heal her wounds, and see her family.

Fate has other plans; she falls into the arms of an old crush that broke her heart as a teen. The GQ Race Car Driver that she met so many years ago. Raven has always had eyes for Tony Fox. How could she forget how he broke her heart with her best friend?

Now he is mature he sees her in a different light. She is a gorgeous, successful woman that he can’t be without. He will stop at nothing to have her.


I hit the call button for the elevator. The 18th floor button had CEO on it. The door opened to the foyer of the office, and there were two empty desks for the assistants that he didn’t have yet. The desks were ready and waiting with state-of-the-art computers, and three of the best printers available. I could see that there were two other offices off to the side of the elevator area also. The art was stylish. I had to guess it was very early Italian; just amazing. It was as if I had stepped out of Hollywood and into Rome, Italy. The tile on the floor was a dark marble. The furniture looked Roman Italian. This floor had been closed for over a month to ensure it was ready for him.

I walked through the reception area into the double doors. He was on the phone, and he lifted a finger that told me to wait one minute. I took a seat until he was finished with his call.
He was speaking Italian. Consequently, it was one of the sweetest sounds. It was so fuckin' sexy. I wondered who he was talking to.

He hung up with an, “Arrivederci. Momma.” Huh, definitely not a new love interest then. He stood up and my eyes were drawn straight to his. His eyes were so beautiful, mesmerizing even, just so intensely blue. I felt as if I were in a trance. I stood as he walked over to me and reached out his hand and said, “Miss Morrison, you ready to go?”

“I will call you Raven when you start calling me Val!” He said with a smile.

“Very well, Raaavvveeennn!” It took him a minute to say Raven as he purposely drew it out. It sounded so sarcastic, yet so fucking sexy.

The black SUV's doors were open, and he held my hand as I hopped in. It was a difficult adventure as I had on a skintight, pencil skirt. I didn’t want to stick my ass in his face. It was not what a sophisticated lady would do; I had to show some decorum. With an ass like mine, I had to try to get in without much of a scene. I have always had a butt – never was able to fit in jeans without taking in the waist. I had back! That is what Michael would tell me. I slowly tried to climb into the large SUV as my ass waved in Val’s face.

After I was settled in, Val came around to the driver's side, and we started to drive away. He leaned over to me and whispered to me, “Are you trying to tempt me, Raven?”

“Tempt you how, Val?” I asked with my eyebrow raised.

“You pushed your tight little ass up in the air. I noticed that ass as soon as you walked in the office this morning; it is the nicest ass I have ever seen!” he whispered.

“Oh, I’m so sorry! My skirt is a bit tight, and I didn’t want to pick it up, and show you all my business!” I said in a low voice. I know I heard him say “pity” under his breath. Oh, my heart spiked again, and I felt a quick rush of butterflies in my tummy. I was on an emotional roller-coaster, with Michael dumping me, and now this new CEO flirting with me. At least, I fucking hoped he was flirting. I needed to keep my emotions in check, but that little voice in my head kept talking to me.

Wendy grew up in Norwalk, California adopted at the age of two days. At the age of 44 Wendy found her Birth Mother. They are making up for time lost.
When Wendy is not Drag Racing with her husband of twenty-two years she is running the Racing team, working as a Trade Show Coordinator, or shopping at the Coach Store.
You can find her running the highways between; Phoenix, Arizona.  Las Vegas, Nevada.  California.
You can always find her with some-kind of coffee product in her hand.
She loves Fast Cars, Music and Tattoos.