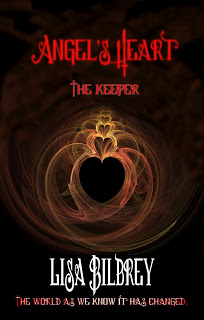 BLURB: An age old prophecy, secret societies, and an enemy she never even knew she had, Sophie Crenshaw always thought of herself as just being average. Along with her two best friends, Deva and Tabitha, Sophie sets off on what she thinks is a normal vacation. What she doesn't know is that everything she thought she knew about who she is, and what she can do, is about to change. With the help of people who she's never met, but know everything about her, will she be able to get control of the feelings steering up inside of her? Or will it be too much for her to handle?
Henry Chang grew up hearing the stories about the legendary Keeper of the Angel’s Heart.  In a divine moment, he's tied to her heart forever. Will their growing love give Sophie the strength and courage to face the greatest challenge of her young life?

The dark, ominous sky wrapped around Oliver Chang as he walked down the cobblestone street. He pulled his jacket tighter around his body in a vain effort to keep himself protected from the bitter cold wind biting at his skin. The streetlights did a poor job of lighting the way, illuminating only small portions of the street. The temptation to broaden the range of the lights pulsed through him, but it was imperative to play it safe tonight. Even with the shadows creeping up around him, he couldn’t put everyone at risk.

Oliver turned left, walking down the alley between two deserted buildings and sparing a look behind him. Tonight more than any other, he had to make sure that nobody followed. Dangerous people were out. Oliver couldn’t be sure who to put his faith in. Only a few select people had earned his trust, and even then, he’d learned to tell them only what he deemed necessary. Checking once again that he was still alone, Oliver ducked down a set of stairs that led to the basement.

The door’s hinges creaked as he let himself in, and a sigh slipped out when the blast of warm air sank through him. Oliver tugged his jacket off, walking down the dank hallway and coming to a stop in front of a large, steel door. He raised his hand, knocking three firm and distinct thumps that echoed through hallway.

“Password,” a steely voice asked from the other side of the door.

A loud click came a moment before the door crept open. Oliver quickly stepped in the room, not wanting to stand idly in the hallway. Closing the door, the man behind him took his coat and offered him a respectful nod. Oliver looked around, noticing how everyone sat around the large, oak table in the middle of the room, anxiously awaiting any news. However, while everyone waited, nobody spoke. Everyone here knew tonight would change everything.

Oliver moved around the table, taking his usual seat. “Have we heard anything?”

“No, nobody’s called yet.” The woman who replied to him leaned back in her seat, dragging a frustrated hand through her long, black hair. “How can you be sure that your information is correct?”

“Nora.” At the mention of his wife’s name, quiet murmurs echoed throughout the room. Nora Chang wasn’t to be taken lightly by anyone. “She’s with them now.”

Before anyone could say anything, the door to the room flew open, and Nora Chang came bustling in. Her dark hair flew behind her and she had a wild look in her eyes. “She’s here,” she announced.

“Is she safe?” Oliver moved next to his wife, slipping his hand into hers.

“As safe as she can be for now.” Nora looked around, letting a smile spread over her lips. “Today, the world as we know it has changed. We now have the responsibility to do everything we can to protect the Angel’s Heart.”

Angel's Heart hits the ground running; you don't really stop until you reach the end, and are left wondering: Where's the rest? But not in the bad way; in the good way of you want more.

Watching the page count climb as I worked my way through the book was bittersweet; I wanted to know what was going to happen next, but knew that every page turned would take me closer to the end. Bilbrey writes with a smooth flowing style that lets you envision the lush island all around without losing focus of the story line and her amazing characters. There is never a dull moment with the large ensemble of unique cast that make up the story.

In my opinion, Angel's Heart is a great YA – more to the adult side of the spectrum – novel. A handful of well placed swear words, a fantasy 'first time' that should go down as one of the best, and a spiteful aunt hell bent on violent revenge all tip the scales toward making this a tale for more mature readers.

If you like using your imagination and escaping into a world of magic, beauty, and the love of soul mates, then Angel's Heart: The Keeper is for you. Grab your copy, get cozy, and sit back for Bilbrey's adventure where Hawaii is just one stop on her fanciful journey!