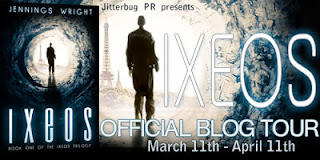 Once again I get to participate as a Blog Tour host with an official Jitterbug PR book release tour! Please welcome Jennings Smith as she tells us a little about the first book, IXEOS, in her new trilogy, and I ask her to share an inspirational event from her life that led to her writing. Also, be sure to check out the rafflecopter giveaway at the end! 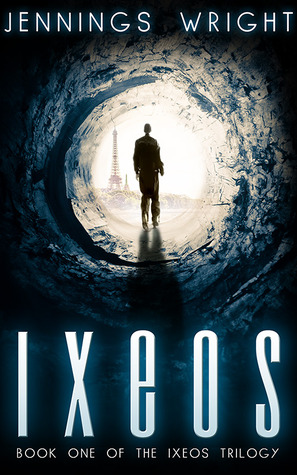 IXEOS Blurb:
The McClellands are enjoying a lazy summer vacation at the beach when they are lured from our world into Ixeos, an alternate Earth. Finding themselves lost in a maze of tunnels under Paris and surrounded by strangers, they discover that they have been brought to Ixeos for one purpose:  to take the planet back from humanoid aliens who have claimed it. With the aid of the tunnels and a mysterious man named Landon, the teens travel the world seeking the key that will allow them to free Darian, the long-imprisoned rebel leader.

The aliens aren't the only problem on Ixeos -- the McClellands have to deal with brutal gangs, desperate junkies, and a world without power, where all the technology is owned by the aliens, and where most of the population has been killed or enslaved.

What led you to write, Ms. Wright? (sorry, had to)

Write What You Know

Now obviously, one doesn’t toss out the writing observations of Stephen King, Janet Evanovich, or Elizabeth George, all multiple best-selling authors. But, either because I’m now what is nicely called “middle age” and so a bit more experienced and confident about my own abilities, or because the indie author revolution has brought out so many new insights, I am beginning to trust myself a lot more than the shelf full of books and the few on my Kindle.

One of the main things writers hear is “write what you know.” In some ways, this is certainly true. I’d say in relationships, emotions, and conflicts that’s good advice. If you’ve never been in love, don’t write about it. You’ll only pass on clichés you’ve learned from movies or books, and your writing won’t have the ring of authenticity. But in other ways, this is really stupid advice.

My newest book, IXEOS, is set in an alternate earth. Initially, this seems like what I know. Ixeos has the same history as our earth, up until 2012.  So far, so good. At the time of the novel, however, the planet has been taken by humanoid aliens, more than 99% of the humans have been killed, and most of the rest enslaved. Because EMPs and WMDs were used in the war, the only power, internet and transportation available is owned by the Firsts, who protected their grids.

Now, I do live without power when I’m in Uganda, frequently. But there are still stores with fresh food, still places to go with internet, my cell phone works at least as well there as in the States, and there are lots of cars and motorcycles. So living completely without power, with no supply chain for necessities… I don’t know what that’s like.

Aliens? No experience with those. Dystopian nightmare? Nope. (Thank God!) Living underground? I can’t say I have, nor do I want to.

The same is true with my other books. I haven’t searched for treasure. I haven’t been chased by bad guys with guns. I haven’t lived in a cave for a week or found secret doorways or deciphered maps in Old Master paintings. I didn’t live during the Civil War (or any war, for that matter) and can’t fully appreciate the horrors I would have seen had I done so.

Think about Star Wars. The Hobbit. Terminator. War of the Worlds. Harry Potter. Works of science fiction and fantasy, steampunk, even, I daresay, erotica, are imagined, taking the basics we know of human emotion and existence and projecting the “what if” scenarios based on other, completely unknown, elements.

I suspect that the “write what you know” advice didn’t start out to limit flights of fancy, but I think it does, especially in young writers. Young writers have limited experiences to draw on. I remember being told, “Write what you know” in a college class and thinking, “I don’t know much of anything!”  So I didn’t write much, and was glad when the class was over. Perhaps I was just too literal, but I don’t think I was alone.

I would say, “Write whatever you can dream of.” Make up worlds if that’s what you see in your mind’s eye. Use the internet to find out about locations you’ve never visited but want to write about. Invent technology. Conjure up alien races. Create languages. Live on Mars. Bring a story into being from nothing. It’s in you!

Write what you don’t know, and tell it in such a way that we all learn it by reading your work. That’s a lot more interesting, don’t you think?

What a fabulous answer! Certainly makes one stop and think.

Crawling down the pipe quickly became painful on Neahle’s knees, and her eyes didn’t seem to adjust as quickly as she’d expected. She could hear the boys following behind her, Marty first, then Clay, both muttering under their breath. She smiled. Marty didn’t do a lot of outdoors stuff back home, that was obvious, and she took a perverse pleasure in dragging him along with them. To be honest, she enjoyed his company, too — he was sharp witted and funny, in an annoying sort of way. Her brother would be grinning by the time they exited the tunnel on the other side.

“I thought you said we’d be able to see,” Marty complained, his voice echoing on the metal sides of the pipe.

“It’s not like we’re going to get lost,” Neahle said.

“At least you’ll run into the nest of snakes first,” Marty said. “Just send them ahead, not behind, please.”
Neahle laughed and kept crawling forward. She didn’t know how far they’d come, but the dune wasn’t terribly wide and she thought they should be able to see the round eye of light from the Slough-side by now. At least they hadn’t run into any creatures — as much as she’d teased Marty about the snakes, she was more worried about spiders.

“Shouldn’t we be seeing the end by now?” Clay called from the rear.

“I was thinking that, too,” Marty said.

“I dunno,” Neahle said over her shoulder. “But it’s been going straight, so we’ll come out eventually.”

After another few minutes, she thought she could detect a circle of dim light ahead. “I think I see the end!” she called back. “There must be a screen over it or something; that’s why we couldn’t see it before.”

“I hope we can get out,” Clay said. “I guess we can always turn around and go back.”

“Probably some kind of filter,” Marty said. He was just happy that they weren’t lost. Although he wasn’t sure how they could get lost in a straight length of pipe.

Frowning, Neahle kept crawling forward, wincing as her bruised knees tried to find the smooth places between the corrugated ridges. The light didn’t seem right, even for a screen. And having a filter didn’t make sense, unless there was one on both ends; the pipe would just clog up with debris. Conscious of the guys behind her, she kept moving.

When she was ten feet from the end, she stopped. The light coming from the end was extremely dim. Marty didn’t realize she’d stopped until he ran into her.

“This isn’t right…” Neahle said softly. “That’s not the outside. I can see a wall.”

“Did you say a wall?” Clay said from behind, confused.

Crawling slowly, Neahle tried to make sense of what she was seeing. She stopped two feet from the mouth of the pipe and stared, confused. In front of her was a rough, light-colored stone wall, but no screen. There was a dancing orange light, which made her think of a fireplace. The air coming from outside the pipe seemed stale and damp, but in a musty way, not from sea air.

Sitting on her rear, she turned back and ran into Marty. “I told you to wait!” she hissed.

“Yeah, right, like that was gonna happen,” he said.

She could see both of the boys in the dim light. They were leaning over, trying to look around her, confusion on their faces.

“Did we turn into the dune somehow?” Clay asked, scowling.

“And run into a fire? I don’t think so. We didn’t turn, anyway. The pipe went straight.” Marty said.

Marty craned his neck around her. “I don’t see why. We can always go back; the pipe’s not going anywhere.”

As he was speaking, they heard a soft sound and small scufflings. Leaning forward, Neahle laughed. “It’s the ducks! They came down here after all!”

“Why in the world would they come so far?” Marty wondered.

“Maybe there’s some killer duck food here. It could be some kind of feeding station for the Rachel Carson Preserve. Maybe they’ve trained them to come here, so they’ll come in a hurricane,” Clay said.

“That makes sense,” Neahle said. “The light could be some kind of solar or wind powered lamp. We might as well check it out.”

She scooted forward on her bottom, dangled her feet over the edge and dropped down three feet to the ground. Looking down, she was surprised to see that the floor was rock, not sand. Marty and Clay followed close behind her, looking around.

“This doesn’t look like the inside of a sand dune…” Clay said, toeing the rock. “This is solid.”

Marty scowled. “I don’t know what the inside of a sand dune looks like, but I don’t think it’s this.” He reached out and knocked on the rough wall. “That’s not sandstone. That’s rock.”

“And that’s not solar,” Neahle said, pointing to a flickering torch stuck into an iron sconce on the wall.

Simultaneously they all turned around, looking back to the pipe. It wasn’t there.

Born and raised in Rockledge, Florida, Jennings spent her early years reading anything she could get her hands on, when she wasn't spending time in and on the water. She won a prize in the 6th grade for her science fiction stories.

Jennings attended the University of the South and the University of Tampa, graduating with a B.A. in Political Science, and almost enough credits for B.A.s in both English and History. She spent time over the years doing various kinds of script doctoring, business writing, editing, and teaching writing, but mostly having and raising her family, homeschooling her children, owning and running a business with her husband, and starting a non-profit to Uganda.

Thanks to a crazy idea called NaNoWriMo Jennings got back into creative writing in 2011 and hasn't stopped since. She's written four novels and a screenplay in less than a year, with more ideas on the drawing board. She currently lives in North Carolina with her husband, also a writer, and two children, and travels extensively.

Where you can find Jennings Wright:

Enter below for your chance to win!
(open to US residents only)