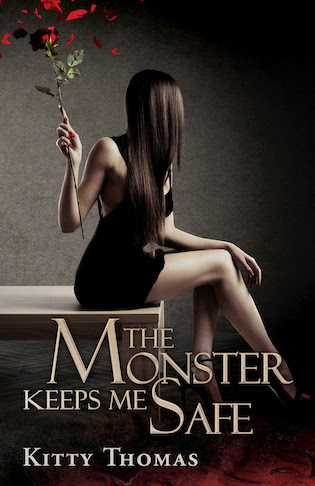 At some point, right before my memory clicked off, the nightmare fairy must have paid the world a visit. Everything is just… gone, a tangle of blank confusion.

Then a new monster comes to take me to a new life and a new cage far from the castle and the promise of safety.

I went to the kitchen and heated the rest of my lo mein and chicken and vegetables and sat at the table. As I ate, I kind of faintly heard—but really more felt—the throbbing of music below me. The sound vibrated against my bare feet.

So Shannon had a basement. I suppose I should be grateful I hadn’t been locked in it. I couldn’t believe it hadn’t occurred to me that one of those locked doors might lead to a basement level, which made it all the more suspicious that the door remained locked all the time.

I finished my food and put the cartons in the trash. I’d planned to go back to my room, but I went down the hallway on the main level instead. One of the mystery doors was cracked a fraction of an inch, the music drifting ever so slightly up and out to my ears.

The temptation was just too great. I had to know what the hell happened at a party this man would host. As soon as I took a peek down the stairs, I discovered I was wrong about yet another thing. Shannon’s elevator did go up to the sex floor.

The basement was a big finished space like an open floor plan apartment. It stretched fully from one end of the house to the other, creating a complete underground level.

There were maybe thirty or more people downstairs, every single one of them naked. There was no pretense of lingerie or underwear for either the men or the women. But the freaky part about the whole thing was that they all wore masks. Not masquerade masks that just covered your eyes, and not those creepy white masks that made you look like a mannequin, either.

No, these were the kind of masks you’d wear for Halloween. Maybe it was a costume party, though I was pretty sure it wasn’t Halloween. There were gorilla masks and monster masks and wolf masks and alien masks—even a few freaky cartoon character masks that were way age inappropriate given the circumstances down here. The only requirement seemed to be that the mask had to be full coverage, not one that only hid half the head or face.

The only thing not going on at the party was oral sex—for obvious mask-related reasons. The guests partner-swapped so fast it nearly gave me whiplash. I couldn’t even begin to guess which one was Shannon. Or was he hiding somewhere watching it all and not participating?

The rule of the night seemed to be that anyone could fuck anyone—no holds barred—because no one resisted. No one said no, no matter how many people they were passed around to. And the whole thing was utterly and completely anonymous.

The floor was a dark shiny hardwood. Expensive black leather sex furniture was interspersed throughout the large space as well as a few beds for those who preferred more comfort. There was spanking and whipping going on in the middle of the large space and a few women and one man being led around on leashes. There were three different couples fucking on one bed, and more lined against the walls like an assembly line of depravity.

I turned to go back upstairs, but a hand ensnared my wrist. “Where do you think you’re going, lovely? You aren’t following the dress code. I think we need to punish you for that.” The voice didn’t belong to Shannon.

I tried to pull away, still thinking I could reason my way out of this. “Let me go. I have to go back upstairs.”

“Shannon didn’t tell us he had a girlfriend. Do you just let your boyfriend fuck whoever he wants? That’s generous. Does he allow you the same freedoms? I can’t imagine him being so gracious with you.” His hand moved to the button on my jeans.

I wanted to scream for help, but I was both afraid someone might recognize me even with my new look and even more afraid to draw Shannon’s attention. Maybe I could stand to just let this guy do his thing and then slip back upstairs. It wasn’t as if Shannon hadn’t told me to stay in my room and keep my door locked. Even as I did it, I couldn’t believe I was trying to rationalize the situation—as if it would be my fault this guy couldn’t process the word no.

The stranger shoved me down on the black carpeted stairs and stripped me down so fast I couldn’t believe it had already happened. My clothes lay in a chaotic pile near my feet. I had barely enough time to try to wrap my head around anything that was going on and whether or not I thought I could handle it better than the alternatives.

His heavy weight settled on top of me, and I freaked out and screamed. I couldn’t just let it happen. Shannon was going to kill me for breaking his rules and coming down here, but I’d rather Shannon kill me than this guy fuck me. I had such messed-up priorities.

While I processed these thoughts and tried not to think about what was about to happen, the stranger was ripped off me. A second later, a guy in a gorilla mask had him by the throat against the wall. “Did she look like someone here for you to play with?” Shannon shouted.

I pressed my clothes against me and slowly backed up the stairs.

“Not you!” Shannon said, eyes blazing with fury from behind the mask.

I froze where I was. He’d never yelled. I’d never heard him yell before tonight. He was calm and methodical. I hadn’t been totally sure he had the emotional range to yell. But tonight there was a new and very different energy about him.

KITTY THOMAS writes dark stories that play with power and have unconventional HEAs. She began publishing in early 2010 with her bestselling COMFORT FOOD and is considered one of the original authors of the dark romance subgenre.

To find out FIRST when a new book comes out, subscribe to Kitty's New Release List: KITTYTHOMAS.COM