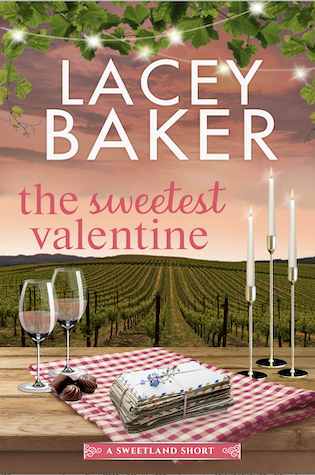 When the idea for a new script brings Hollywood actor Kelan Hunter to the Wine & Chocolate Festival in the small town of Sweetland Valley, MD, sparks fly with the charming candy shop owner who has a list of reasons for why their love isn’t meant to be.

Ruthlessly organized Sydni Murray’s life goal checklist was derailed after her broken engagement last Valentine’s Day. Now, with the holiday fast approaching again and the town’s biggest chocolate festival on the horizon, she must put her biases about love on the backburner. Until Kelan walks into her shop with his model good looks and a box of his grandparents’ love letters that melt her heart.

But happy ever after may not be in the cards for the couple as Sydni’s in danger of losing her shop and Kelan’s plan to stay in Sweetland is threatened by an unbelievable career opportunity.

There was a movie star standing in her shop, posing for pictures with two of her dearest friends and all Syd could think about was how many more milk and dark chocolate truffles she needed to make to complete Savannah Cantrell’s order. She’d intended to spend the morning in the kitchen working on the order but Sharay, her part-time clerk, was down with the flu. That left her the only one here to run the store today. Not that she minded, Sinfully Sweet was her dream come true. Owning and running her own specialty chocolate shop after the detour she’d taken on her career path was an accomplishment Syd was thankful for every day.

“Unfortunately, we’ve been in here way too long. We’ve got to get going before Aunt Louisa becomes hysterical with worry.” Julia’s hand on her shoulder had Syd turning at the sound of her voice.

“Huh? Oh, yes, you’re right. You were supposed to be over at the community center putting up decorations today.” Luckily for Syd, Marabelle Stanley was an early bird and any events that she oversaw she liked to get a head start on. With Syd having to work today she wasn’t available to help Marabelle.

It was Saturday, the week before the Wine & Chocolate Festival and tomorrow after church was the pre-festival kick-off with Marabelle’s Valentine’s Day luncheon. Louisa Kirk, Julia’s aunt, was Marabelle’s shadow and the sugar to Marabelle’s often bitter attitude.

Julia rolled her eyes. “Yes, we’ll have to hustle to get there without being too late, but I couldn’t resist getting that cupcake. I’m ordering a dozen from Gina since you only have a limited supply here.”

“Great news! Kelan’s going to be in town for a few weeks and he’s agreed to stop by the luncheon tomorrow.” Nessa’s exuberance as she bounced over to them was infectious and Syd found herself smiling.

“That’s very nice of him,” she replied and looked behind Nessa to where Kelan Hunter was staring down at his phone. No doubt checking his availability for the off-the-cuff commitment he’d just made. Surely a man like him would be too busy for a small-town luncheon.

“Let’s go tell Aunt Louisa,” Julia said nodding toward the door. “You gonna be alright here alone with him?”

Syd shrugged. “He’s an actor not a serial killer, right?”

Julia waved a hand as she headed toward the door. “You know what I mean. And regardless of his good looks and official career, he’s a stranger in Sweetland so you call me if you need me.”

“Get outta here,” she told them while moving toward the door. “I’ll call you later.”

“Don’t forget. I want to hear about everything you two talk about after I’m gone,” Nessa told her before walking out.

“Girl, bye,” she replied laughing as she stepped back pulling the door closed. The bell overhead jingled again and she turned back to see that Kelan had moved from where he’d been standing across the store.

Now, just a couple feet away from her, he stood with one hand in his jacket pocket. A casual stance that made her feel more relaxed than she probably should be with a guy she’d just met.

“Look, I don’t mean to take up your time. I just have a few questions.”

“Right.” She nodded. “About the post office and a letter that wasn’t written to you.” It all sounded extremely vague and admittedly more than a little confusing. The bigger issue was that she just didn’t have time for any of this today.

“It was here a long time ago but in the late seventies there was a big fire and the majority of this block was destroyed. The post office was relocated two blocks over to Liberty Street and when the reconstruction here was finished, the Town Council decided to keep the post office there because the space was bigger.”

“I see,” he said with a shake of his head. Then he looked around the store again. “How long have you been here? What was this place before you moved in?”

“You ask questions like a reporter.” And with that observation she figured the best way to get rid of him was to answer the questions and send him on his way. “I’ve been here for five years. Took a mortgage out on the building after I returned from Germany.”

His brows were raised when he returned his attention to her and she couldn’t tell if it was because of her reporter comment or her mention of Germany. Oftentimes people mistakenly assumed that small town folk never left their small town to see any of the world. Syd had made a point not to be that person and if everything went according to her updated five-year plan, she’d continue to shatter that myth. Lacey Baker, a Maryland native, lives with her husband, three children, two grandchildren and English Bulldog in what most would call Suburban America--a townhouse development where everybody knows each other and each other's kids. Family cook-outs, reunion vacations, and growing up in church have all inspired Lacey to work towards her dreams and to write about the endurance of family and the quest to find everlasting love. To date she has written in several genres including small town romance, YA paranormal (as Artist Arthur), a cozy mystery series titled Rumors and adult paranormal (as A.C. Arthur).