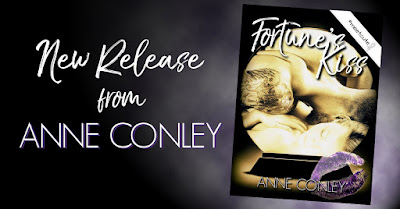 When London was fifteen, a fortune teller told her she would meet her soul mate on June 23rd. The only problem is, which June 23rd? The woman wasn’t specific and only called him her dreamer. Desperate to find her mystery man eleven years later, London sets out to search for him but is waylaid by a mugger instead.
Elliot has had his eye on the woman who jogs past the park where he coaches his nephew’s baseball team for the past month. When he’s the first responder for a mugging victim on June 23rd, she’s barely conscious. She’s the woman tattooed on his chest. He’s seen her in his dreams and has been drawing her for years.
They’ll both sound crazy if they reveal their secrets, but they can’t stay away from each other. Elliot has priorities, promises made to his late sister. London’s trying to live a more intentional existence instead of waiting for everything to fall in her lap.
Can they fulfill the destiny predicted by the fortune teller? Or will fate be undone? You can find ALL the #MeetCute books in the collaboration here:  http://meetcutebooks.com/ Boy meets girl. It's the way romances usually begin . . . and while we all love a happy ending, it's the #MeetCute that wins our hearts. Grab your copy of Fortune's Kiss! 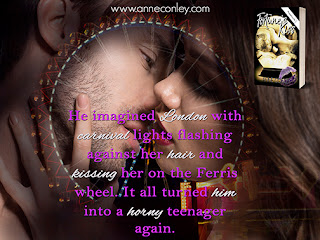 How did you two meet?
The #MeetCute Books each have a unique answer to that query. Some might make you swoon, others might make you giggle . . . and some may make you blush.
Twelve authors.
Twelve stand-alone contemporary romance novels.
Twelve stories that will make your heart beat a little faster.
Because it's all about the #MeetCute. 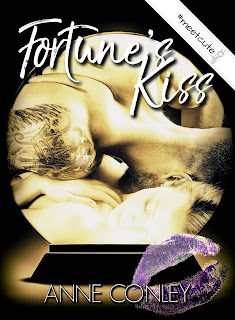 He lowered his mouth to hers in a tender touch of their lips. She could feel the warmth of his lips on hers, and they explored in a leisurely kiss as if they had all the time in the world. Sounds of the carnival faded away as they rose higher into the sky.
Elliot surprised her by not getting handsy. He only touched her neck, wrapping his hand around it while his other hand went to her waist. He seemed content to just kiss her and not do anything else.
She returned his kisses, luxuriously running her tongue across his teeth, exploring the recesses of his mouth with a whimper. The kiss was perfect; it didn’t ask for anything or make demands. London relished the feeling of rightness in this moment with Elliot.
London suddenly understood a fundamental truth about couples in general. She kissed Elliot because the setting was perfect. It wasn’t a claiming thing or an interest in going further, it was a kiss. She kissed him because the intimacy of the gesture showed her desire to be close to him, and not in a sexual way.
She’d always thought holding hands and kissing in public were signs of possessiveness, but they weren’t. Instead of possessiveness, she realized it showed a desire to be close—to maintain contact in a way that was acceptable to others.
And this kiss was perfect. 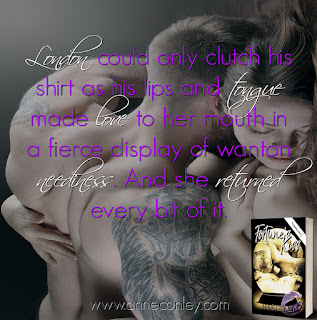 The leisurely contact, as she wrapped her arms around Elliot’s waist to pull him closer, was amazing. There was absolutely no other place in the world she wanted to be right now. She was in her thirties and had never kissed a man like this.
A throat clearing had them pulling apart reluctantly to find the Ferris wheel had stopped and the tattooed, toothless attendant was standing there with a giant grin on his face. “Magic in the air, tonight! Want another go?” Bushy eyebrows waggled at them.
London couldn’t have told him her name after that kiss, much less the story behind it. She was afraid if she went on another turn with Elliot, he’d have her kissed into brain mush.
Elliot got out, a small smile on his face, and turned to hold out his hand to London. Shetook it and, weak-kneed, managed to stumble out of the Ferris wheel carriage before another couple got on.
Leading Elliot down the midway, they were silent as she digested the way she felt right now. She wanted more with Elliot, and he was the first man to ever make her feel that way. He held her hand as they walked, and London’s traced her swollen lips with her fingers as she stared at the ground in front of her.
His hand was massive, wrapped around hers, and spoke of safety, protection, and belonging. Their hands swung absently between them as they weaved in and around people. The lights flashing, bells ringing, and people laughing all faded into the distance as London was just present with Elliot.
“That woman is waving you over, London.” Elliot’s soft voice spoke the first words since they’d gotten off the Ferris wheel.
London’s head snapped up, her eyes focusing on the woman he pointed to. It was her.
The fortune-teller.
The dimly lit tent at the end of the midway looked so familiar, even twenty years later. The woman looked the same—old and wizened, with a wild array of dark curls spilling around her face.
“I know her.” Not really, but she’d dreamed of this woman so many times, remembering her, wondering about her. They walked over to the fortune-teller, ignoring all else. “Hi,” London said stupidly. “How’ve you been?”
The woman’s dark eyes went from London to Elliot before her face broke into a smile. “I see you found your dreamer. Do you feel it?” London wasn’t sure what she felt, but she felt something, so she nodded.
Part of London wanted to go inside the tent and see if it had changed, but another part of her didn’t think this was real. She looked up at Elliot, who was watching the woman with a bemused expression on his face. Okay, so he saw her, maybe she was real.
The woman turned her attention to Elliot, who stiffened under her scrutiny. “Destiny is difficult … Very difficult …” Her attention back on London, she said, “You’ve found him, now keep him.”
She went back into her tent, and London tugged Elliot away.
“Friend of yours?” he asked, laughing nervously. 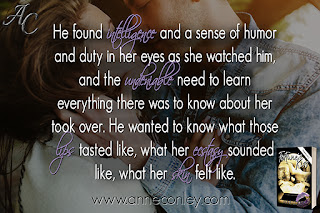 “Not exactly. More of an acquaintance.” London turned to look back at the tent, and as before, it was engulfed in darkness, as if there was no one there. “Take me home.” Elliot’s eyes darkened under the lights of the carnival, and he wrapped his hand around her waist, his fingers lingering just above her butt.
“With pleasure,” he spoke with a promise that took her breath away.
Posted by From the desk of... R.E. Hargrave at 2/02/2018 02:00:00 AM