L@@K at ME! Gray's Promise by Anni Fife #GIVEAWAY #RomanticSuspense 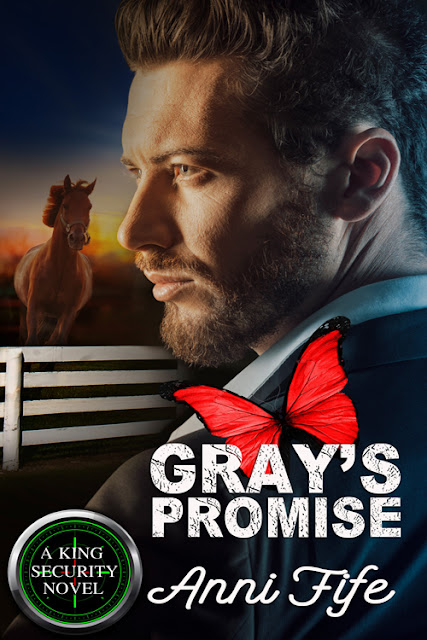 Zoey Morgan seems to have it all as a successful surgeon in Boston. However, perfection lies only on the surface. Plagued by nightmares and amnesia from a tragedy that ripped her family from her fourteen years ago, she finds the courage to reach out to the only man who can make her feel safe. She’s buried the memory of their love, but her heart—and her body—responds to the ex-marine in ways that are all too familiar.

Grayson “Gray” Walker’s heart shattered when Zoey chose another man over him. Since then, he’s built an impenetrable wall around his emotions. But from the moment she implodes back into his life, her vulnerability breaches his defenses. His skills as an elite member of the King Security team cannot shield him from the devastation of learning he might have left Zoey high and dry when she needed him most. Now, Gray must navigate the tripwire of helping her heal while protecting himself from being hurt again.

As the embers of their potent love reignite, an old threat awakens, leading to greater danger than ever before.

A jealousy that destroys everything in its path…a love that refuses to die.

Gray’s nostrils flared. “You got an itch, Zoey?”

Awareness flushed through me. “And if I did?” His smoky-blue eyes dropped to my mouth. Like he flicked a switch I licked my lips.

“Christ!” His whispered curse made my stomach tighten into a hard ball, but I met his scowl and blinked innocently. He shook his head, his gaze mocking. “I’m not the person to tap, sweet-thing, if all you want to do is scratch.”

His brows shot up. “Did you just call me buddy?”

I clamped my lips together. Disbelief was frozen on his face. I returned his stare bug-eyed. My body started to shake. I swallowed but as hard as I tried, the laughter gathered.

Uncontrolled giggles burst from me. “S-sorry.” I held up a hand. “So sorry.” I spluttered again and bent over double, giggles turning into snorting laughter.

“Fuck. Now I know what Luke means by Katya being a pain in his ass.”

I hugged my aching stomach and squinted at him. “Jeez, tough guy, what’s with you and asses?”

He glared at me. “You need yours spanked.”

“Is that a promise?” I was aiming for blasé but my wheezing snort ruined the effect.

Gray stood and grabbed my hand, tugging me to my feet. “Let’s get out of here. This isn’t the place for this conversation.”

“What?” I giggled. “A spanking conversation.” The idea of Gray reddening my butt made me clench it. Yikes!

“No, sweet-thing.” He swung his arm around my shoulders and whispered in my ear. “A conversation about your itch. That conversation.”

“Oh!” My breath quickened. And my laughing fit instantly died.

It was hot in here.

For an author, reviews are our lifeblood. They are the reward that make agonizing hours at our keyboards worth the tears and time sacrificed with loved ones. They are also vital to increase readership, as readers rarely buy a new author if their book is missing good reviews. Gray’s Promise has hit the ground running with a slew of 5-star reviews from bloggers and verified Amazon readers, many of whom have said that it is one of their favorite reads of 2017. N.N. Light, author and Amazon Influencer, humbled me by saying this in her review: “In a nutshell, the best book I’ve ever read. Hands down.” Now that makes me cry…and feel good to be alive!

When I shut the door on my life in the city, including a successful career in TV Production, I had a dream of what I wanted my life to be like: live in a small town where my neighbors knew my name, walk the beach every day, make friends with people who actually cared about me, and WRITE! In December, after I published my second novel, Gray’s Promise, and celebrated the festive season at my small beach home with my family and friends, I realized I’m living the dream. And how fantastic is that!

THREE – A CONTRACT IN HAND!

Starting the year with a publishing contract in hand for my third book, Eva’s Peace, definitely makes it good to be alive. This is the story of mysterious and emotionally contained Scarlett Eva Young, King Security’s profiler and half-sister to Thayne “King” Kingsley. Her awesome alpha hottie is LAPD Detective, Tom Payne. I’m aiming to bring their heart-wrenching story to you by Fall this year.

Zoey's BIG THREE of What She Loves About Gray
(with extracts from Gray’s Promise!)

ONE – GRAY IS ZOEY’S SUN

For as long as Zoey can remember, going back to when she was eight years old, Gray was the light that shined brightest in her life. In her words, “Even on my darkest days, he’s my sun.” When pushed to give one reason why this is so, Zoey reveals that it is Gray’s innate understanding and unconditional acceptance of all that she is…and isn’t, that makes her love him to the bottom of her soul.

THREE – HIS HONOR AND PROTECTIVE SPIRIT

When Zoey’s sanity is threatened by panic attacks, and fragmented memories haunt her waking hours, she finds her way back to Gray. Their shattered love story, past hurts and betrayals, cannot obliterate her faith in his innate honor and protective spirit. He is the beacon in her darkness, her sun, and her safe zone. Zoey reveals this at the end of the story when she tells Gray why she loves him: “I love your honor and your unflinching loyalty to those you call family…I love your need to protect me, to protect others.”

Gray’s BIG THREE of What He Loves About Zoey
(with extracts from Gray’s Promise!)

ONE – SHE’S THE ANCHOR TO HIS SOUL

Gray’s connection to Zoey is instantaneous from the moment they meet as children. As their relationship moves from childhood best friends to young love, she becomes his anchor in the face of an emotional tornado, his touchstone as he endures the worst of betrayals. When tragedy strikes and they are torn apart, Gray feels cut adrift. Years later, when Zoey comes to him for help, Gray is confronted with the undeniable truth: Zoey is the anchor to his soul. “Thousands of tensile steel threads bound them together. Over time, they might have been stretched to their limit but they had not broken. It was like she was burned into his DNA. And when Zoey hurt, Gray felt the same hurt deep inside himself.”

Zoey has a wicked sense of humor. Gray loves this because even when he’s mad at her, she has the ability to cut through his temper in such an unexpected manner, he can’t help being seduced into laughter.

Since Zoey blossomed into a woman, Gray has been captivated by her.

“His beautiful red butterfly. Mercurial and brilliant. Her dark-copper hair alight with so many fiery streaks, he was constantly amazed it didn’t singe his skin. The curly length was unexpectedly soft, so goddamn sexy when it slipped like satin through his fingers. But as much as he loved her hair, it was her eyes that endlessly beguiled him. Tapered like a cat, they were vivid-green with a golden ring around her pupil. A fascinating combination of sex-kitten and innocent, and such an integral part of her expressive nature. There were times he thought they were too large for her heart-shaped face, but then she’d laugh and they’d turn that intense jewel-like green. Wicked. Infectious. Or she’d whimper with desire, and the golden ring would leak into the green. Hot and slumberous. Untamed.”

"In a nutshell, the best book I've ever read. Hands down." - ✯✯✯✯✯, NN LIGHT POTL Blog

"Tense, dark, and like a kaleidoscope of evil machinations, this romantic suspense will keep readers on the edge of their seats!" - ✯✯✯✯✯, Tomb Tender Book Blog

"One of my favorites for 2017 and a must read!" - ✯✯✯✯✯, Behind Closed Doors Book Reviews

"I was sucked in from the very first words...what I loved about this book--the unexpected expectations." - ✯✯✯✯✯, Bookgasms Book Blog

"This author definitely sinks you in deep on this story and I will be reading more of this author." - ✯✯✯✯✯, TDC Book Reviews

"This suspenseful romance is utterly spellbinding and well worth the year wait!" – ✯✯✯✯✯, Behind Closed Doors Book Reviews

Chased by her criminal kingpin father, Katya Dalca runs to New Orleans and straight into the arms of Luke Hunter. Sucked into the carnal world of the French Quarter, she succumbs to Luke's potent sexuality. He not only steals her breath, he steals her heart and the only leverage she has against her father. She is left with no choice except to pick up the pieces and rebuild her life alone.

Undercover DEA agent Luke Hunter thought his newest assignment--recover a stolen flash drive to gain the trust of the Russian mob--was like any other. But his target brings him to his knees, and after one taste of her intoxicating beauty, he's in too deep. Doing his job means walking away, leaving his heart behind with nothing but a promise to reunite. It's a promise he can't keep.
When Katya's past reaches out and her world unravels, her only hope is the one man she is most vulnerable to--Luke.

Anni Fife is an exciting new contemporary romance author who has already made an indelible mark in the popular genre of steamy romantic suspense. Her debut novel, Luke’s Redemption, has been acclaimed by critics and readers and was a Finalist in the 2017 RONE Awards. Anni says she credits Kristen Ashley as her guiding inspiration, and strives to make her characters equally as heart-wrenching and unforgettable. She is currently working on Eva’s Peace (King Security Book 3).

Last year, Anni closed the door on a successful career in television production to fulfill her lifelong passion, writing. In the space of a month, she shut her business, packed up her city life, and moved to a small seaside village. When she’s not writing, she can be found on the beach searching for pansy shells, or drinking red wine and gabbing with her gal posse.

If you want to know when Anni’s next book is releasing and be first to get regular updates and BONUS TREATS, visit her website and sign up to join her POSSE.

Anni is published by The Wild Rose Press, and is a member of Romance Writers of America (RWA).