L@@K at ME! the Bob books by R. Murphy #ParanormalRomance 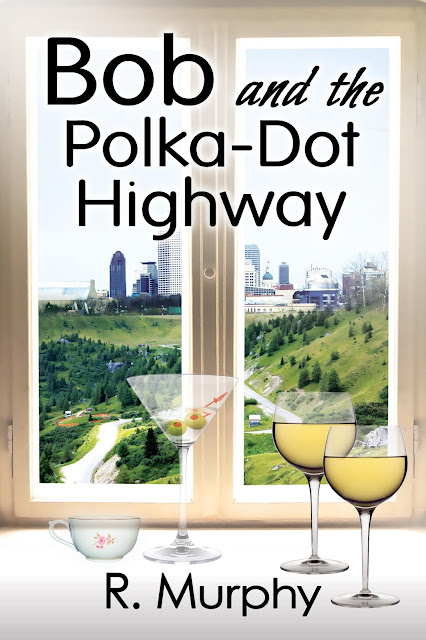 Poor Roz…once again stuck on the horns of a dilemma. Does she accept the great offer for a job that’s hundreds of miles from Crooked Lake? Or does she pick David, the great guy who grows grapes half a mile from her house? And either way—assuming our crabby woman-of-a-certain-age manages to make a decision—what about her ghost, Bob?

Granted, Bob and Roz have never had a … ummmm… ‘traditional’ relationship but still, martini-loving ghosts don’t toddle along every day of the week. What happens to the wit, the sparkle, the laughter?

Join Roz, David—and Bob—as they spend a beautiful, but confusing, summer on Crooked Lake. And oh, by the way, watch out for drips…

After a few weeks spent at her new job in the Midwest, Roz has commuted back to the Finger Lakes to tie up loose ends and finalize the sale of her lake home.

After brewing my tea, I wandered out to the deck where I finally had a chance to sit in my rocking chair and--after weeks of work in the Midwest, mourning, and running around--relax.

Colorful sailboats flitted over the sparkling water that I called my back yard, darting from shore to shore like dragonflies skimming the small waves. More than a dozen of them, I’d say, playing with the same breezes I’d enjoyed in the house a few minutes ago.

This was the lake of postcard dreams. Trees dressed in green decorated each bank while fluffy cumulus clouds, blimps of freshly-laundered cotton, hovered in bright blue skies. Sunshine poured over the entire contented landscape, golden honey from a jar.

Hard to believe after everything I’d been through, but this was the first time I’d ever seen the lake in full summer mode. All of a sudden I got it. I understood why people fell in love with life on the water and fought tooth and nail to stay in this little Brigadoon, sheltered from the cares of the world. A place set apart, cocooned like a happy memory from childhood, impervious to the cares and worries that beset the outside world.

Here was shelter, here was rest. Here timeless hobbies filled lazy summer hours, fishing and boating and swimming, pastimes that had existed for centuries and would exist, essentially unchanged, for centuries more. Living on the lake plucked you out of the normal flow of time and now I finally understood the magnetism of life on the water.

In my case, though, understanding was not quite the same as love. Instead of feeling the lake in my heart, appreciation for it never got further than my mind. I could never see the glories of summer without remembering the snow drifts and ice of the difficult winter I’d just struggled through, or the high waters and shale-shoveling marathons of only four months ago. My year-round involvement with the lake embodied the difference between a multi-dimensional relationship and an infatuation. This lake would definitely be a great place to visit in the summer, during the beautiful times. A same-time-next-year kind of relationship. Year-round, though? Another story, at least for me. 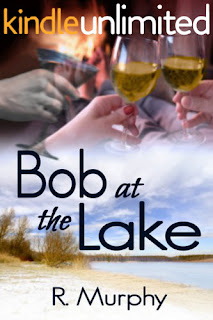 Bob at the Lake

What would happen if Roz, a crabby woman of a certain age, moved to the wintry shores of a New York lake—and got a ghost? And not just any ghost, mind you. Bob’s a ghost from 1920’s Manhattan, full of quips and over fond of his martinis, who swans around in a silk smoking jacket and makes Roz’s life very . . . well, let’s just say ‘complicated.’

Especially after Roz meets David, the good-looking grape grower who lives up the hill. Join Roz, David—and Bob—as they navigate blizzards, cookie mazes, holiday shopping sprees, and the occasional power outage. (You know, all of those delightful challenges of a good, old-fashioned Northern winter . . .)

“Trust me, it will hit you like a brick of gold.”

That’s Bob. He’s my ghost. Well, not my ghost since I’m sitting here writing, but the ghost who lives with me. Other women probably get muscleman ghosts who can fix plumbing and take out the garbage, or romantic ghosts who set their hearts a-flutter. Me, I get a ghost who’s middle-aged, plump, and who likes to lounge around the house in a silk smoking jacket from the nineteen-thirties. Not exactly the kind of ghost I’d ever imagined I’d get. I will admit, though, that Bob does make an amazing martini. A martini that, in fact, hits you like a brick of gold.

I found, unfortunately, the longer Bob lived at my place, the more I appreciated his skill with martinis. Which was probably not a great thing for my liver, or my relationships with my sisters, but what the heck.

Remember the Great Recession? According to the newspapers, some consumers seem to be wiping it from their memories, but it had a big impact on a lot of people, including me. That economy hurt. Lost jobs, lost houses, lost marriages, lost hopes—lives turned upside down in the flutter of a pink slip. People scrambling just to keep from drowning—couch surfing, penny pinching, living newly frugal lives.

Like millions of others, the economy sucked me into its undertow. In Nashville, my life had been moving along in a sensible fashion, even if it wasn’t Cinderella happy. A big-girl job, a decent townhouse, nice-enough neighbors, the occasional date. Then, like an idiot, I decided to stretch a bit financially and buy a lake house in New York’s Finger Lake area. I’d planned to rent it out during the summers and make money on it with an eye to retiring there a few decades in the future. My sister Katie and her husband have a summerhouse on the lake, and they were doing just fine with it.

After much too-ing and fro-ing between Nashville and western New York, I found a beautiful house on Crooked Lake, three miles up the road from my sister, and bought it. My house is ten miles from the nearest coffee shop or grocery store but, for a rental vacation home, who cared?

Two Nashville job layoffs later, I cared. Those were tough, bitter months, and I decided to leave the south to live closer to my sister. There’s nothing like getting kicked in the teeth a few times to make you realize how much you need family. 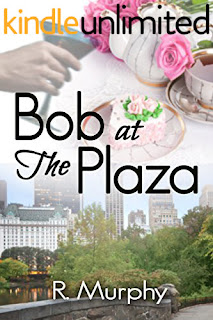 Bob at the Plaza

What a winter it is! Record-breaking snows followed months later by record-setting rains. Ah, the joys of living on a lake shore when the spring floods arrive.

Undeterred by mice, sociopathic relatives, Carnegie Hall disasters, and spring floods, Roz searches for her MIA ghost. In the process she goes toe-to-toe with the hyper-verbal crowd at the Algonquin Round Table. Can Roz best smarty-pants Dorothy Parker in a game of wits? Will Harpo Marx finally speak out and help Bob return to Crooked Lake?

For the answers to these and many other spirited questions, read BOB AT THE PLAZA!

I hesitated for a minute at the top of the post office stairs of my small town, determined to have a little fun before I returned home. What next? A no-brainer—fresh cinnamon-sugar cider doughnuts from the apple shack. Do stores like this exist anywhere but the northern states? Small seasonal places that sell mostly apples and apple products, like cider doughnuts and cider, and maybe some locally made cheeses and maple syrup on the side. Until I’d moved to New York, I’d never realized how many kinds of apples you could buy: McIntosh, Empire, Jonathan, McCoun, Delicious, Granny Smith, Crispin, Gala, and Cortland, to name but a few. And my latest favorite, Jonamacs.

The variety of local apples available from the apple shack amazed me. When I’d lived in cities, I guess I’d always just, unthinkingly, picked up a bag of Macintoshes or Empires whenever I wanted the fruit. A few months ago, faced with a dozen different varieties in the apple shack, I’d had no idea what my favorite apple was. So, I decided to do some apple taste-testing. I selected and individually bagged and weighed eight different apples that day in the store (much to the amusement of the woman at the check-out counter). Every afternoon I’d try a new apple for a snack and take notes. (Do I sound like a woman who lives by herself in the country with, perhaps, a tad too much free time on her hands? Hell, yes . . .) Turns out I didn’t like too-tart apples or grainy yellow-fleshed ones, or super crisp, aggressive, squirty varieties. My favorite fruits were ladylike, gentle apples, mildly sweet, moderately juicy, with dainty white flesh. In short, Jonamacs.

Like a dedicated knight on a quest, I now pursued Jonamacs whenever I could find them. I suspected I’d be desolate when they went out of season. And I wondered about other people, who’d eat whatever apple they could lay their hands on. Would they be considered apple gourmands? Apple Don Juans? Consuming enthusiastically, indiscriminately, unthinkingly, whatever random, willing apple came their way? (Yes, undoubtedly, a tad too much free time on my hands . . .)

Roz Murphy is the pseudonym of a long-time Finger Lakes resident who lives with ghosts and doesn’t want to confirm in her neighbors’ minds how nutty she really is. (They already have their suspicions.) After decades of writing in Manhattan and throughout the country, Roz settled on the shores of New York’s Keuka Lake, some of the most beautiful country ever created. She’s an ardent fan of the Finger Lakes wine industry, especially the local dry Rieslings.