Promo Tour: Paramour for the Devil by Savannah Hill

PARAMOUR FOR THE DEVIL 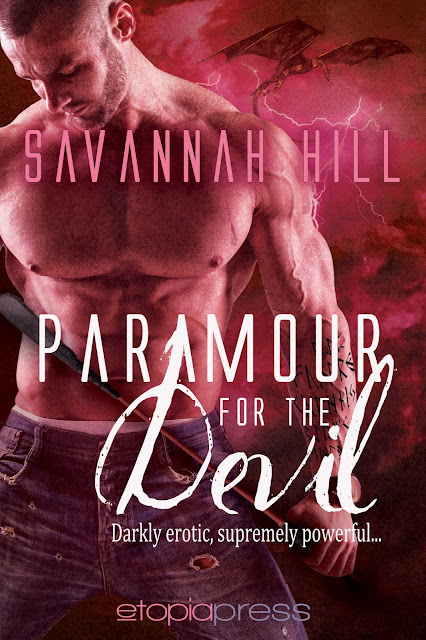 Haley Hawthorne is a witch. She shuns her paranormal gifts, instead escaping into a mundane, reclusive life as an accountant for her Uncle Eli’s firm. Five years earlier, Haley was kidnapped by Raden, brother of Lucifer, and held captive as his personal sex slave. She escaped but still bears the scars, both physical and emotional. Now she’s turned away from both magic and sex, and she’s certain nothing will ever bring those lost things back into her life...

Damian, son to Lucifer, has renounced his right to the throne of Hell and has become a soldier for Adversus, hunting evil supernatural creatures on Earth. Unfortunately, he’s powerless to witches, and this witch can read his mind. He can’t decide what is more dangerous—the irresistible attraction he feels for her, or the intoxicating peace she gives him. One thing is certain, they both share a tortured past.

After Damian rescues her from an attack by monstrous djinn, Haley discovers the dangerously seductive soldier has secrets of his own. One of them is the collection of whips, ropes, handcuffs, and a leather riding crop he keeps locked away, though he refuses to show her his “Master” side. But when her trust in him grows, she finds herself increasingly intrigued by all the kinky things he’s hiding. But Damian has been given a new mission to kill a monster. A monster that turns out to be her uncle... 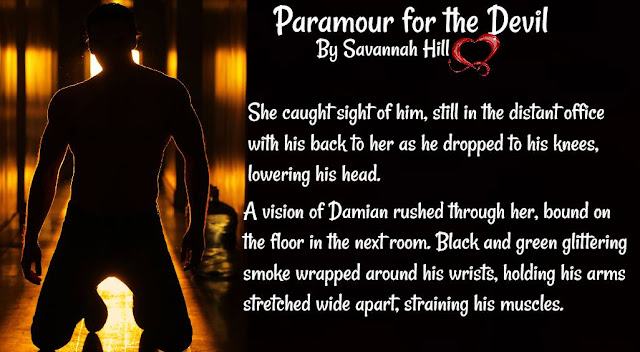 Damian abruptly woke on the couch in the darkened living room with the sense he was being watched. He furrowed his brows at the dangerous witch in front of him, scarcely able to make out her hourglass figure in the sliver of sunlight from a gap in the curtain.

"What are you doing?" Lowering his arm to his side, he sat upright.

"Oh, I'm sorry." Haley's gaze darted downward. "I was..." He tried to probe her mind, and she promptly pushed him out, forming an invisible shield around her thoughts. "I was looking for Adam." She cleared her throat lightly.

Panicked by her unknown intentions as his eyes adjusted to the low light in the room, he pinpointed his gaze on her. A blur of white and black polka dotted silk, awkwardly standing with her face turned away from him. Her neckline plunged deeply, brought up to tie in a silky bow behind her slender neck, accentuating her bare shoulders.

"He's in the library." Surprised at how soft his own voice sounded, Damian suddenly felt an intense urge to pull at the ribbon until it slid down her perky breasts.

He raised an eyebrow as her creamy complexion turned pink.

"Adam, I mean, Aimee said Adam was in here, so..." The girl could barely breathe.

Shameful self-loathing tore through him as he recalled her tear-filled eyes, their bright blue depths staring up at him from Raden's table.

She rushed to the doorway, a black tulle slip under the hem of her dress swaying at her sexy thighs. With a sudden ache in his groin, he caught a peek at the red soles on her black high heels. Her ponytail bounced as she hurried away from him. He imagined how she would look perched on his lap without any clothes on.

Forcefully eliminating that thought from his mind, he stood, cracking his neck back and forth, and headed into the sun-soaked hallway. She's a goddamn witch, what are you thinking? He happened to be oddly vulnerable to their magic, rendered completely powerless, and tended to harbor an automatic hatred for them. If this beautiful witch was, in fact, planning any kind of vengeance toward him, he'd be royally fucked. Not to mention, she's Adam and Stephen's little sister. That's gotta be some kind of guy code violation.

Walking into an empty bathroom, he undressed to take a shower and found his cock standing firmly at attention. He rolled his eyes. Even if you did want her, I'm sure she fucking hates you. You let her get tortured while you sat inches away. Leave her the fuck alone.

He scrubbed himself hard in the shower, trying to rid his mind of her, but was still achingly swollen between his legs. His thoughts drifted to what she'd looked like sleeping next to him the day before, perfect pink nipples barely showing through her lacy white top in just the right light, those sexy fuck-me heels with the red soles as she walked away. He'd never experienced such a strong attraction to anyone before, and it was insanely distracting, especially since she was entirely off-limits to him.

Lowering his head in frustration, he let the water wash over him for a moment. Just thinking about her couldn't hurt anything. He moved his hand to his pulsing cock and began to stroke it.

She lives in the beautiful Pacific Northwest with her man, the love of her life, and spends her days chasing their toddler boy who loves to giggle.

First, who are your favorite authors? What do you like about them?

I really love River Savage's men. They're total alphas, and they have really dirty mouths. She's great at tossing you right into the story. My favorite erotica author is Anne Rice, writing as A.N. Roquelaure, the Claiming of Sleeping Beauty quartet. Those books are wild and dirty. I also really enjoyed the Twilight series by Stephenie Meyer.

Are you reading a book now? Which one?

I'm reading two ARC's right now, Shadows by Amber Lacie and Degrees of Control by Eve Dangerfield, both are fun and sexy. I read them whenever I need to take a break from writing, and they are both really great so far.

What are you passionate about?

I love to write. When I'm in the writing zone, I feel like a complete person. Lately, I've taken an interest in cooking for my family (my man and our toddler boy). At least one home-cooked meal per day. I'm having a lot of fun with that. Our little boy eats up the meals I make a mistake with and doesn't like the ones that I think come out like perfection.

What does a perfect day look like for you?

If it's a writing day, complete solitude and dark, rainy weather. I live in WA, and I love that weather. For just a regular day, I love preparing for a big event, whether it's a fun party with our friends, or a vacation. I like getting up early when I have something to look forward to that day and marking things off the to-do list.

Is Paramour for the Devil a standalone story? What can your readers look forward to next?

It is actually the first book in the Hawthorne Witches series. I'm working on the sequel, Seducing the Devil, right now. The third and fourth books are about Haley's cousins, Emily and Cassie. They both fall in love with very dark supernatural men. I also have plans for novellas (or possibly full-length novels) for Haley's brothers, Adam and Stephen. And I just completed a novella called Unchained Love that should release by Christmas 2016. That one is about a wealthy girl whose father is running an underground fighting ring, and she comes across his newest prize fighter chained in the wine cellar. It's an erotic, violent holiday-themed story.

How do you feel about your characters in Paramour for the Devil? Do you think you'd get along with them? Would Damian be able to steal your heart?

Haley has a lot of respect for other females. She's passive by nature, but can be a total badass when she has to be, and she has two really fun best friends. I'd love to hang out with them. As for Damian, oh yes, I think he's so dreamy. He's definitely a bad boy, but he's got a vulnerable side underneath. He's also really kinky, I love that.

What inspired you to write this story?

Do you have a favorite scene in the book? Why does it spark your interest?

What type of scenes do you consider the most fun to write?

I love them all. I attempted to write many novels before this one (beginning in sixth grade) and I got bored easily, abandoning the book if I hit a boring scene. Then I decided that if the story bored me to write it, it would bore the readers too. I wanted this book to be a wild ride. That's my goal for all of my upcoming projects as well.

If Paramour for the Devil is adapted to film, which actress/actor would you envision for Haley and Damian?

I'd picture Danneel Ackles with bright blue eyes for Haley. For Damian, that is tough. I don't think I've seen an actor that looks just like him. Maybe the guy from Avatar if he had iridescent green eyes. Even then, I don't think he looks quite like him.

Is your own personality reflected in any of your characters?

Do you have any advice for aspiring authors?

If I had any advice to give, it would be to write what you genuinely love and power through your fears. Hard work and perseverance will always produce great results.

Is there anything specific you want to say to your readers?

THANK YOU for reading. :)