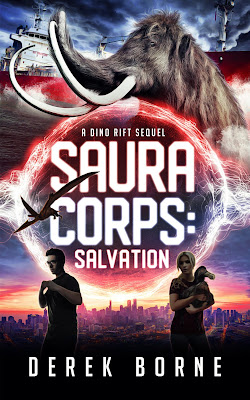 Released November 01, 2022; 270 pages
SauraCorps.
Once a criminally covert operation for trafficking dinosaurs to the present, the reformed company now fights a seemingly futile battle to keep dinosaurs safe and out of the public eye.
High school grads, Kamren and Vivienne, are navigating their new relationship status while on a cross country vacation.
Until a dodo bird waddles into their lives.
Being thrust back into the world of prehistoric creatures and those who use them for nefarious purposes causes a rift between the teens.
What will it take for Kam and Viv to save the dinosaurs…and themselves?
Note: The Dino-Rift duet is set in the same universe as Derek Borne's "The Ultimate Agent" series.
BUY THE BOOK
Add to your Goodreads TBR List
Add to your Bookbub Wish List

Borne is back... and he's done it again!
A year has passed since the enthralling yet nightmare-inducing days of the Rift. Vivienne and Kamren have graduated from high school and are looking forward to a dino-free future.
Or, are they?
A couples road trip over the summer before heading to college, best laid plans, and proposals are soon thwarted by the revelation that Viv hasn't been holding it together quite as well as Kam thought, and a curious, but adorable, Dodo bird.
Who does not belong in present day.
Most folks would find a way to convince themselves they hadn't seen what they had. That there was some plausible explanation. Viv and Kam know better, however. And whether they like it or not, they are once again involved in the thrilling yet dangerous underworld of time rifts and corporate espionage.
What follows is an edge-of-your seat page-turner of a ride, including a few new prehistoric friends.
"Hold onto your butts" for all the quirky and fun music and entertainment references, awesome dino-drawings, and of course, the perfect Hollywood Ever After.
While this can can be read as a stand alone, I highly recommend you start with the first book of the duet, Dino-Rift (ONLY 99c! at the time of of this review). Not only is it a fantastic read, but it really does set the stage for SauraCorps.