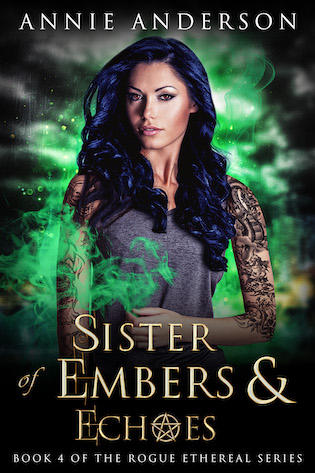 Demons, murder, and a trip straight to Hell…
I thought I’d get a little time off before the veritable poop hit the fan, but fate — or rather the Fates — have other ideas. The witch who tried to have my sister possessed has escaped, and not only do I find him dead, but I don’t have a clue who he was working with. Or working for…
Now I have a Council Member in human jail, a ragtag bunch of stuffy law-abiders to lead, and a solid inkling that the next person on the chopping block is me.
All of that would be bad enough, but I’ve got bigger problems. Maria isn’t quite right after a demon almost stole her body, and I have a hunch it’s going to require a trip to Hell to get it fixed.
Time to sharpen my athames, vacation time is over.

Goodreads / Amazon
—
EXCERPT:
My eyes narrowed over the rim of my teacup. My grandmother crossed her legs, matching my glare as she sipped her own tea. In all likelihood, she was holding in a laugh. Bernadette had seen oceans rise and fall, empires crumble to dust, entire civilizations wiped from the face of the earth. As one of the first demons in Hell, nothing short of a full-blown apocalypse was going to phase her.
Especially not my paltry little glare.
Fair enough.
Uncrossing my legs, I folded them underneath me, sucking down another sip of my tea as I settled deeper into the overstuffed armchair. I wasn’t a big tea kind of person, but the herbal blend I’d concocted in a fit of nerves last week seemed to be growing on me. I’d been doing a lot of things like that—things that Maria would have done herself if she’d just freaking wake up.
“I’m not setting foot in Aether until Maria wakes up, and that’s final.”
Final.
Like that word ever stopped my grandmother. I was pretty sure if she had even a single shred less class, she’d have given the Fates the old double middle-finger salute while telling them to kiss her ass.
That last bit might just be wishful thinking on my part. At least it was amusing to think about.
“It’s been a week, Maxima,” Bernadette chided softly, her voice full of understanding, but her message clear. I couldn’t wait much longer to interrogate Elias. The Fates were running out of patience, and I was running out of time.
“Have they gotten anything out of him at all?” I asked, unable to keep my gaze from shifting from Bernadette to Maria’s closed bedroom door.
I didn’t like being on this side of it. I didn’t like that I wasn’t watching her.
I didn’t like that I couldn’t figure out a way to help.
A week ago, Elias Flynn tried to use my sister as a sacrifice by offering her up to a demon as a host. Bernadette helped me stop him, but Maria still wasn’t awake. The longer her sleep lasted, the more I realized we might not have been as successful as I once thought.
If we were successful at all. 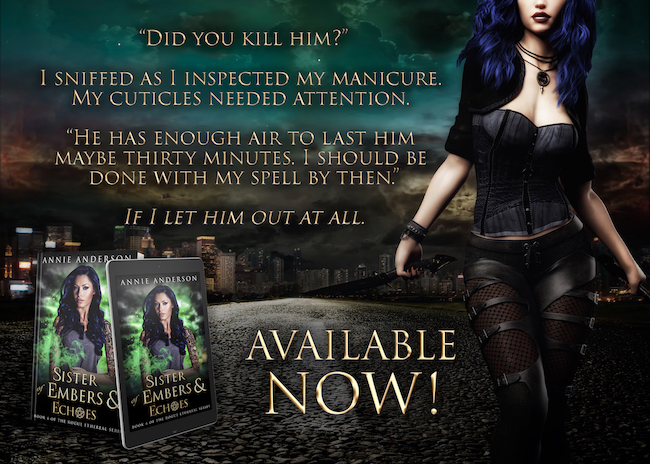 Annie Anderson is a military wife and United States Air Force veteran. Originally from Dallas, Texas, she is a southern girl at heart, but has lived all over the US and abroad. As soon as the military stops moving her family around, she'll settle on a state, but for now she enjoys being a nomad with her husband, two daughters, an old man of a dog, and a young pup that makes life... interesting.
Website / Goodreads / Facebook / Twitter / Instagram / Pinterest