A reluctant new Lord of Night. His vulnerable human queen. If they can't change five thousand years of history now, it will change them. Forever.

Fate has cast vampire Dominic Marchant and the human love of his life, Cassidy Chandler, into roles they never imagined. Thanks to his mad sire, he is now the Lord of Night, and Cassidy, with her unique ability to merge her mind with his, has become the incongruous mortal queen of his immortal kingdom. Even as he dreams of seeing the sun again and she can’t imagine becoming a vampire, they vow to reshape their domain into a world where vampires feed on love rather than fear and leave their prey swooning instead of dead.

But not all their subjects are pleased with the change in leadership. A powerful ancient vampire and his cadre of followers serve Dominic his greatest challenge yet just when reclaiming the day looks like a real possibility. Soon friends turn up in ashes, and Cassidy and his human family become targets in a dangerous game of cat-and-mouse that leads them and their unlikely, vampire-hunting allies deep into the wilds of the Canadian Rockies—and straight into their worst nightmares.

With their lives and the very existence of the world of night hanging in the balance, Dominic and Cassidy must decide whether to chase an impossible dream or finally embrace their dark destiny. 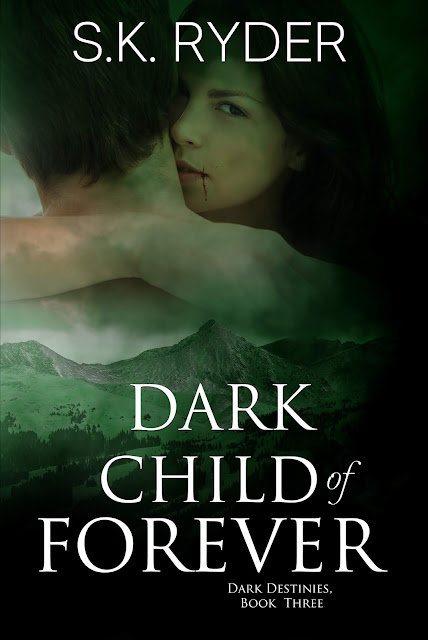 The vault door in the vestibule unsealed. A vampire appeared and stood with his arms draped over the decorative gate, his unshaven face split by a lecherous grin that made Jackson rise from his chair in alarm.

“Cassidy.” Serge’s baritone voice purred with appreciation. “You ordered takeout.” Unlike his lord and master who still digested the events of the day, Serge had no idea what the human was doing there.

“Oh, yes, he does.” Serge unlatched the gate and sauntered across the kitchen, barefoot and rumpled, his curly caramel hair sticking out in every direction, the vampire equivalent of a man in search of coffee.

Jackson glared at him. “Sleeping with the boss now? You’ve come up in the world.”

“Sleeping? No. Not I.” Serge puffed out his barrel chest with pride. “I stand guard over my lord.”

His lordship materialized beside Serge and delivered a gentle slap to the back of his head. “More like lie guard flat on your back,” he said in his lyrical French accent.

Serge growled much as the cat had earlier. “But I am always with you.”

“I know,” Dominic concurred with a dramatic sigh. “There is no getting rid of you.”

“And you are glad for it, blood-child. Admit it.”

Cassidy smiled at their antics. Tall, lean and grace incarnate, Dominic was the polar opposite of both the stocky Serge and muscle-bound Jackson. Even dressed in his usual exercise pants and T-shirt, both black, few would mistake him for the ordinary man of twenty-seven he had been when he was turned into a blood-drinker. Carved cheekbones and a knife-blade nose dominated his profile, and his expressive mouth could instill terror as easily as convey gentle humor. Not to mention bestow mind-blowing kisses.

But it was the eyes that were the most striking thing about him. Their quiet depths missed nothing and could flash from warm and beguiling to full black and disturbing in the space of a heartbeat. Gold flecks danced in the hazel irises now as he looked at her.

“Bonjour, mon amour,” he murmured and held out his hand.

“Bonjour,” she said, moving into his embrace.

The world around them fell away, and they stood together in the sunlight streaming through the foyer just as she remembered it. He rubbed the back of her neck with his thumb while she nuzzled into his thick hair, inhaling his heady youngling scent of winter on the cusp of spring, clean and earthy and full of warm promise.

“Indeed. He brings gifts,” Serge said, pulling them back to the moment.

His tone had lost its swagger and turned dreamy. It meant he saw ‘shadows’ in the aura of whoever he was looking at, or impressions of the future. When Serge had his visions, disjointed and insubstantial as they were, something always changed.

Often not for the better.

Though Dominic appeared unconcerned, Cassidy felt the tension skitter through him, too. Neither of them dared to interrupt Serge as he studied Jackson with an intense interest that no longer had anything to do with his warm blood. The human man returned the stare, his hands wrapped over the back of the bar stool as though preparing to pick it up and use it as a weapon.

Serge turned to look at Dominic with a wide, gap-toothed grin of wonder. Then he chuckled. The gleeful sound was entirely worthy of the pirate he had been in life.

“Oui?” Dominic prompted. “Did he bring a good gift?”

Jackson offered a tentative smile. “I suspect you’ll like it.”

In a flash he was by Jackson’s side, his eyes bugging out of their sockets. “Beware the fire,” he whispered on a hiss that made Cassidy’s skin crawl.

Jackson took a hasty step back.

“Beware the fire,” Serge repeated, now looking at Dominic. Then he laughed uproariously and disappeared.

Dominic closed his eyes and struggled for patience.

Cassidy rubbed the chill out of her arms. “That was Serge. You remember him, don’t you? Vampire you tried so hard to kill?”

Discomfort tightened his mouth as he looked away.

Dominic moved forward and placed his hands on the edge of the green granite counter top as he faced Jackson. “So did you bring me fire, Jackson?” His gaze darkened as he let the vampire rise and his senses expand.

Looking through his eyes, Cassidy saw that Jackson had changed more than she realized. His aura, once muddy red with anger, had brightened into the powerful crimson of a man whose mind and purpose were clear.

Jackson took a deep breath and pressed a fingertip onto the little black case. “In a way.”

Dominic tilted his head, brows drawing together. “This is from the lab?”

The lab. The Striker Foundation’s clandestine research facility, staffed with bright scientific minds compelled by Dominic to maintain absolute secrecy. The lab existed for one reason, and one reason only, and it was this now that caused Dominic and Cassidy to become stone-still with anticipation.

“They did it, Dominic. They found a way. You can have the sun again.” 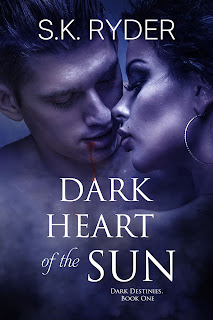 Dark Heart of the Sun

His future is already written...in her blood.

Rookie journalist Cassidy Chandler wakes to an ugly bruise on her neck, a hole in her memory, and a fiancé who seems to know more about what happened than he's telling. It's enough to make Cassidy call off the engagement and move out, even if that means trading a posh South Florida mansion for a dilapidated beach house. Unfortunately, she also trades one devious man for another questionable character in her unexpected new roommate: the darkly enigmatic and exasperatingly French Dominic Marchant.

For Dominic Marchant secrecy is a matter of survival. As a newborn vampire with dangerous enemies, he's sure the headstrong young woman invading his lair with an unknown vampire's mark on her throat is about to get him killed. But the charming Cassidy resists his every effort to make her leave and even embroils him in her own tumultuous life. Before he knows it, she has stolen his heart and helps him rediscover his lost humanity. Now he's fighting to protect her not only from the ancient vampires hunting him, but also from his own deadly desire for her.

But her secretive ex isn't done with her yet, and neither is the dark prophecy Cassidy and Dominic's unlikely relationship has set in motion. Together they are swept up in a battle where nothing is as it seems, love and deception are the weapons of choice, and the only way to survive is to risk everything--for each other. 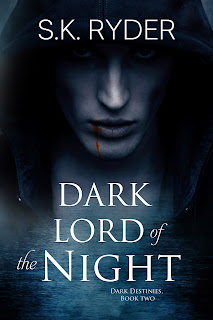 Dark Lord of the Night

The only thing standing between a new vampire and eternal darkness is the fragile mortal woman who claims his heart.

Youngling vampire Dominic Marchant struggles to master his deadly instincts as he hunts the urban jungles of South Florida. He keeps his hunger confined to the blood of the guilty with help from Cassidy Chandler, a human woman who can literally touch his soul. Their love is his last remaining tether to humanity, which is tested beyond endurance when powerful forces from his past introduce him to terrifying new appetites he could never have imagined.

His efforts to protect Cassidy from the depravity overtaking him push their relationship to the brink of shattering. Refusing to give up on the man who is her heart, she takes an unthinkable gamble to save him. But is she fulfilling an ominous prophecy that ensnares them both? Or has she become just another pawn in a cunning game played by the five-thousand-year-old vampire who claims Dominic as his own?

Desperate to rescue her from a fate worse than death, Dominic strikes a perilous bargain with his greatest enemies only to face an impossible choice--embrace his darkest self…or destroy the woman he cannot live without.

S.K. Ryder is a software developer by day, a scribe by night and answers to Susan any time. She writes the type of stories she loves to read: heart-pounding adventures full of supernatural mysteries and relationships between strong, compelling characters. Though she calls South Florida home, she has also lived in Germany and Canada and has traveled widely, usually in the hot pursuit of wild and scenic nature. When not debugging code, complicating her characters' lives or plotting her next rafting adventure down the Grand Canyon, she can be found beach combing, scuba diving, sailing or just hanging out with a good book. When push comes to shove, she can also bake a halfway decent cake and stand on her head, though not at the same time.