L@@K at Me! Catch of the Day by Petie McCarty #GIVEAWAY #ContRomance

CATCH OF THE DAY
by Petie McCarty 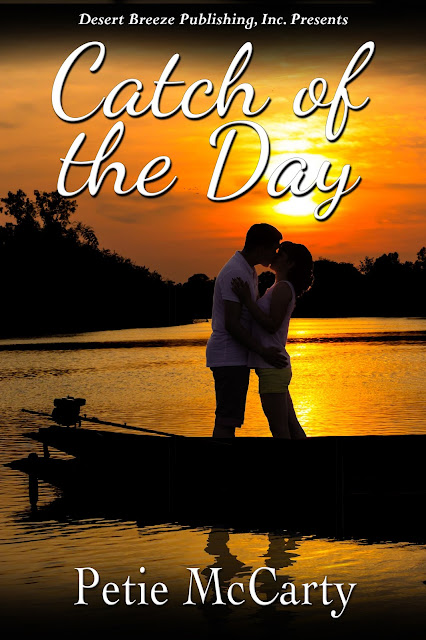 Cody Ryan gets way more than she bargained for on vacation when she enters the annual all-male Loon Lake Tournament and finds herself paired with a sexy Coast Guard captain.

Gage Connor needs a break from chasing drug smugglers off the Louisiana coast and heads to Alabama to do some fishing. He lock horns with Cody Ryan the moment he arrives at Loon Lake, and the sensual sparks fly.

To further complicate matters, Gage is unaware Colombians stashed uncut diamonds on his borrowed bass boat before he left Louisiana, and they want their diamonds back. The Colombians are playing for keeps and will stop at nothing to retrieve their stash -- even kidnapping.

Gage looked over Lila's head and saw Cody stomping toward the dock, a big Igloo cooler in her arms, fire in her eyes, and steam escaping from her ears. He swallowed hard and tried to pry free, but Lila would have none of that.

"Now you just hold still, cutie patootie," she drawled, "and let little ole Lila give you your good luck hug." She crushed her barely-covered breasts against his abdomen, the neckline on her tank top drooping almost to her navel.

Cody reached the dock and stomped so hard he could feel the vibration in the boards. Her glare could singe the fins off an alligator gar, and he had Lila stuck to him like a tick. He was a sitting duck.

Cody looked even madder now than when she left to get the rest of her gear, which could only mean...

He grinned for real.

Zeke Tumson, my ass. She likes me.

He stopped trying to struggle free of Lila and waited for Cody to get to the boat and the fireworks to begin. Lila felt his struggle cease and snuggled in closer, rubbing every inch of her front against him and laying her cheek on his chest. A week ago, Lila's antics would have elicited a very pronounced and noticeable reaction. Today -- he glanced down to check -- nothing. His gaze shot to Cody steaming down the dock. Had she done this to him?

Cody marched mere steps away. When Lila purred, Cody hesitated for the span of a second, made a sharp left, stepped down into the johnboat, and proceeded to hook up her livewell. He waited a five-count. Cody kept her head down and fooled with the tubing attached to the cooler. He had to move. If he didn't, Lila would be in his shorts any second.

Maybe he should let...

Nope, bad idea. Cody would push him overboard later and drive off and leave him. Heck, she may already be planning to do just that.

He cleared his throat to be sure Cody heard. "Thanks for seeing us off, Lila," he said politely.

No reaction from Cody.

"I didn't come to see her off," Lila said in a snit. "Just yoouu," she cooed and rubbed her breasts against him again.

Cody missed it. She never looked up.

"All right, you get on back to your registration table, and let me get to my fishing." He took her shoulders and physically set her back.

Cody finished with the livewell and picked up a fishing rod.

Lila batted her eyelashes. "I'll be waiting when you get back, sugar. What say we have dinner tonight?"

No way was he answering that question. He smiled and stuck a foot out to step down in the johnboat. Lila chose that instant to hook her finger into his belt loop to tug him back.

Too late, Gage saw the butt end of Cody's rod push off on the dock cleat, and the johnboat shot back the full three feet of loose bow and stern line.

His sneaker stepped out into thin air, and he dropped like a rock.

He hit the water at an angle, and Lila followed him in, her index finger still hooked in his belt loop.