BETTING ON CINDERELLA
The Cinderella Romances, book 2
by Petie McCarty 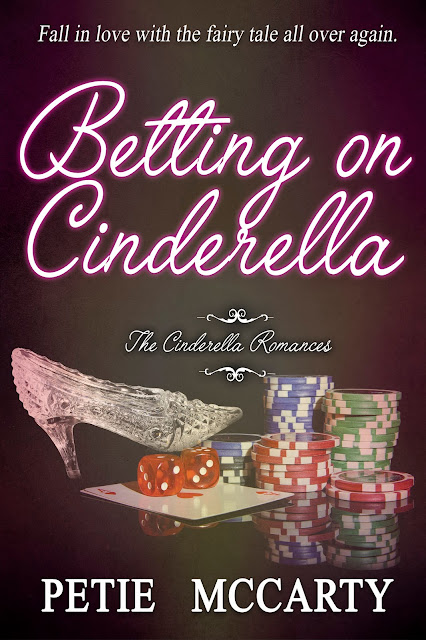 Garrett Tucker inherits his grandfather's casino empire and steps into the reclusive billionaire's shoes as the "Prince of Vegas." His first act is to buy a bankrupt casino in Biloxi. When he discovers embezzling in his new operation, Garrett goes in undercover. His prime suspect is the new finance supervisor—the spitfire brunette who stole his heart at first sight.

Andi Ryan moves to Biloxi to care for her godmother and takes a job as finance supervisor for the renovated Bayou Princess casino. She discovers someone is skimming from the till and starts her own investigation, worried she will be blamed for the theft when the new owner discovers her godmother has a gambling addiction.

Garrett's rival Vegas competitor has sent a spy in to ruin the Bayou Princess, and Garrett and Andi are forced to work together to prove her innocence and discover the identity of their casino spy.

Garrett mentally kicked himself. He had gone and scared her.

Too much. Too soon.

But he couldn’t make himself move. He could lie here forever with Andi in his arms.

She looked too uncertain.

He was okay with, “Not now, but maybe later.”

Good thing he was sitting down. The jangle of fear that hit him could have knocked his knees out from under him.

What the hell? Can’t and won’t?

All his uncertainties flooded back. Flora had said Andi and Peters were just friends. Was that friends with benefits? And what about that damn Drakos pawing her last week? No, he wouldn’t let those doubts crowd them here on the couch.

“Partly.” She looked away, and his heart sank amongst the growing heap of doubts.

“There’s someone else,” he said flatly, working to keep his expression blank and the hurt at bay.

She met his gaze square on then, no doubt trying to muscle her courage. “There’s something I should tell you.”

What? Is that all?

He fought back a grin of pure joy. “I’ll give you lessons.” He pulled her back for another kiss.

She shoved at his chest. “No. I don’t think I should.”

She flinched at his expression, and he worked to smooth his scowl.

“Go ahead. Spit it out.” Even he didn’t like his tone. “You’re sleeping with someone else, right?”

He should have done his homework before he went off half-cocked with all the flowers and balloons, trying to woo her.

“No, and I should slap you for that, suggesting I’m loose enough to go out with you while sleeping with someone else.”

“Then what the hell is it?” he shouted, forgetting all about Flora at the back of the house.

“I’ve never done it before!” she shouted back.

“No, you jerk. Slept with someone.” This, she didn’t shout.

He froze, right down to his heartbeat, and stared at her bright-pink cheeks. Could it be? Was she? A virgin?

She stared at her untouched glass of wine. “I’m not saying you and I will never,” she said softly.

Relief, warm and desperate, allowed his muscles to finally move. He gently traced the line of her cheek with his finger, a lump forming in his throat at the touch of something so rare and priceless.
“Glad to hear that.” He brushed his lips across hers, light as a whisper. Once. “My little sweetheart.” Twice. “My precious—” Three times. Always a charm.

Those big blue eyes stared up at him with an innocence that made his too-experienced heart ache with emotion.

Should he tell her he wanted to go outside and howl his joy at the moon? To yell to the world what a lucky son of a gun he was? His Andi would be his Andi—proprietary, like his stock portfolio. All his. No one else. A primal sense of possessiveness overwhelmed him.

“No, sweetheart, not mad. Glad,” he managed, then tugged her close and let his kiss show her exactly how he felt.

He had finally said and done the right thing, for she grabbed his shirt and laid an eye-crossing kiss on him.

Cinderella's fairy tale moves to Jupiter Island, Florida where Lily Foster, owner of an eclectic landscape nursery, is mistaken for a wealthy socialite by billionaire resort developer Rhett Buchanan. Overdue for a little romance in her life, Lily is anxious for one fabulous date with her handsome prince, so she cultivates her inadvertent masquerade.

Rhett Buchanan has become jaded with the Palm Beach social scene, dominated by scheming women desperate for more money -- his money. Rhett falls hard when he meets Lily Foster. She is a breath of fresh air after the smog of gold diggers constantly surrounding him.

For Rhett and Lily, it's love at first sight until her deception comes to light and pitches their relationship into a disastrous tailspin. Well-meaning friends are determined to intercede and resort to inept high jinks to reunite the estranged couple while a wicked ex-girlfriend plays dirty to keep the couple apart.